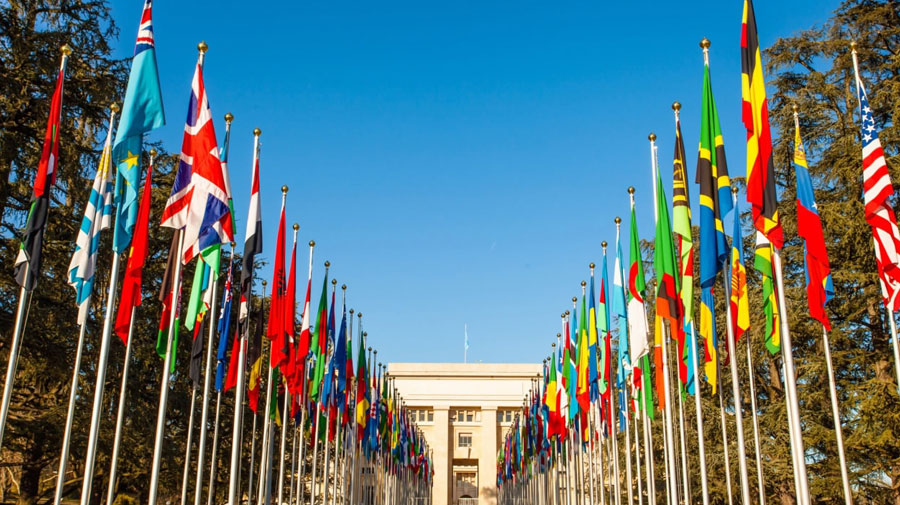 In the modern history of international relations, the end of the Second World War marked the creation of a dichotomy between weak states and powerful states in the paradigm of international organizations. Acting through IOs like the United Nations, the victorious powers or the allied forces imposed their policy agenda on the international community, with specific reference to the axis powers. Though maintenance of international peace and security has been the cornerstone of the UN, it has failed to deliver on this front over the years. These shortcomings can be accounted to the fact that some of the powerful states are trying to monopolize and exploit the system to make its objective align with their vested interests and thus further their agenda. Under the pretence of collective security, powerful states have hijacked and disrupted the system to serve their strategic ends. Thus, it is often said that powerful states structure such organizations to advance their interests. However, to conclude that IOs are merely tools of hegemonic predation through which states exercise their power to dominate the international landscape would be ignoring the complex dynamics that typify the evolution of IOs, nuances in the manner in which they are formed and the intricacies of the functions they serve. By undertaking a brief and critical analysis, this paper aims to illustrate why powerful states choose to exercise their influence and act through formal international organizations while conceding a certain level of autonomy to act unilaterally despite possessing substantial military and economic might to do so.

International organizations like the United Nations have a fairly mixed history when it comes to serving the cause they have been created to defend, which hints at the non-transformative nature of the IOs in and of themselves. IOs are often co-opted by the interests of their member states which causes them to deviate away from their original purpose. This creates a dissonance between their initial intention and the outcomes of their actions. States imbue power to international organizations to serve their ends, thereby reducing IOs to products, instead of drivers, of geopolitics. The creation and development of IOs often represent the deliberate decisions taken by states to change their mutually constituted environment and, thus, themselves. The autonomy of IOs remains bounded by state interests and power, as reflected in their institutional arrangement. However, to advance their interests, the powerful states need to structure these organizations in such a way that induces the weaker states to participate. Pursuing their interest unilaterally has repercussions such as international soft power objectives suffering, opening themselves up to diplomatic condemnatory attacks by international adversaries, endangering long-term policy interests with other international allies that may distance themselves from the concerned state’s illegitimate action and the like. Hence, powerful states have an incentive to grant IOs substantial independence and use them over other alternative arrangements such as decentralized cooperation or informal consultations. Powerful states will not enter an organization they cannot influence yet undermining the independence of an organization performing certain functions will reduce its effectiveness and consequently their own ability to achieve valued goals.

Autonomous Functions and Capabilities of IOs

IOs provide neutral, depoliticized, or specialized forums that function more effectively than almost any informal or decentralized arrangement. States are incentivized to act through a formal organization, juxtaposed to a decentralized approach based on ad-hoc contracting, as it provides efficiency gains that outweigh the accompanying costs in terms of money, human resources, and constraints on unilateral action. States, including the powerful ones, are compelled to act through formal organizations as they are painted to be vehicles of cooperation. They can serve as platforms for pooling activities of assets and risks as they provide a stable organizational structure and specialized staff that can greatly reduce transaction costs while providing additional advantages to the member states. Further, states are amenable to interactions and assistance being mediated by IOs due to domestic and international political reasons accompanied by competing interests that factor in during unilateral aid provided by a powerful state. Consequently, the activities that might be unacceptable in their original state-to-state form become acceptable when run through an independent, or a seemingly independent, IO. In continuation, the acts of independent IOs may be accorded special legitimacy, and they affect the legitimacy of members’ actions. By acting as an independent and neutral body that is free of national bias, the information provided or verified by it assumes greater credibility than when provided by states. In addition to this, IOs provide effective assistance by combining financial and technical resources and accumulating expertise. It is for these reasons that an IO is trusted with facilitating the negotiation and implementation of agreements, resolving disputes, managing conflicts, carrying out operational activities like technical assistance, elaborating norms, and shaping international discourse.

Powerful nations are required to grant independence to an IO in exchange for legitimizing their actions on the international level. This allows the IOs to function on the basis of values and rules that are acceptable to all member states, many of which lack the means to project their influence on their own. In this fashion, the creation of an IO platform introduces an opportunity for smaller nations to form alliances and partnerships which would have otherwise been impossible due to them being unable to stomach the costs on their own. While operating through an IO minimizes the personal cost and maximizes efficiency for powerful nations by pooling resources and through specialized staff, the principle of equality enables smaller nations to also benefit from this structure. Therefore, the influence of powerful nations in the IO, while it may undermine the ability of the UN to achieve its stated goals, also inevitably ends up levelling the playing field to a certain extent, creating opportunities for smaller, and developing nations that might have otherwise not existed if relations had been conducted merely on the interstate level.

Incentives provided to the Powerful States

Powerful states use international organizations to serve their ends as it confers them with legitimacy and proves them to be responsible members of the international community that act in accordance with international norms. They gain more leverage when they table issues through international organizations than when they act unilaterally which is often accompanied by a reputational cost. Further, they can use international organizations to lobby support from smaller states by providing them with incentives. Another compelling reason for states to act through IOs is that it provides for lower transactional costs which streamline the process and makes it more effective. The sharing of resources such as military, logistical, intelligence, humanitarian assistance and expertise ameliorates the burden of the powerful states. Accountability from different member states also figures in the non-exhaustive list of reasons for powerful states to work through IOs instead of pursuing agendas unilaterally. Although international intermediaries diminish a state’s leverage over recipient states, this factor is offset by decreases in other states’ leverage and in competition for leverage among donors.

In conclusion, the actions of powerful states are adorned with legitimacy and credibility when they act through formal international organizations than through informal channels or unilaterally. In order to meet their own strategic ends, powerful states have to grant a certain degree of autonomy to IOs as the value of these functions outweighs the cost of parting with a degree of their own dominion. By deploying actions through formal IOs, powerful states are presented with an opportunity to capitalize on the properties of neutrality and independence embodied by the organization. Thus, powerful states represent an interplay between the intention to further their agendas and the caveat of granting autonomy to IOs in doing so.

Khushi Baldota
Author is pursuing her Bachelor's in the Jindal School of International Affairs, O.P. Jindal Global University. She serves as a research assistant at the Centre for Security Studies and is the co-author of an upcoming book Capability-Based Planning in India's Security Strategy. She can be reached at: 19jsia-khushi.mb@jgu.edu.in
Tags:
Share:
Share this...