The Destructive Dance of Israel and Palestine 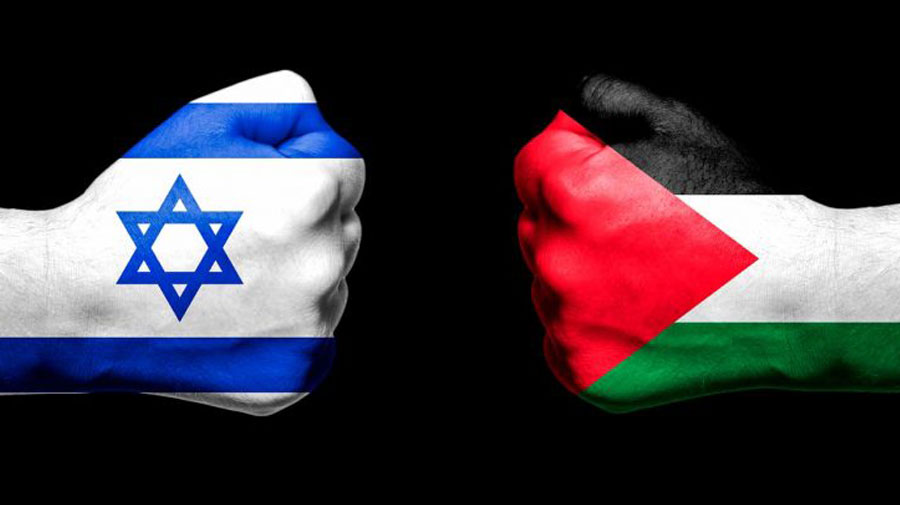 The year is 2021 and the world still has not seen much respite from the rampages of the COVID-19 pandemic. On top of this, we have witnessed and observed some interesting geopolitical developments that have sown the fears of a third world war in the minds of most nations. The latest of these developments involves the newest round of confrontation between Israel and the fundamentalist Palestinian organisation Hamas that seeks to liberate Palestinian people from alleged Israeli occupation. Tel Aviv witnessed thousands of rockets launched by Hamas raining down upon its roof tops; had it not been for their extraordinary and sci-fi-esque Iron Dome defensive missile system, the capital would have been in great peril. Israel responded with their usual “an eye for an eye” approach and launched a brutal and seemingly inexhaustive counterattack on Gaza. The alleged involvement of Syria and the Hezbollah in Lebanon came to light when rockets were fired at Israeli-controlled regions. As of now, the death toll has reached approximately 267 (both sides) and the nature of the conflict has gotten even more appalling. An assortment of governments from Norway, Egypt, France, Jordan, and Tunisia came together to call for a ceasefire resolution in the United Nations Security Council while the rest of the powerful EU nations remained divided over the matter; even the United States which has been an actively staunch supporter of Israel in this decades-old conundrum faced difficulties in getting Tel Aviv to wind down its aggression.

Taking advantage of the lack of a decisive western presence in this matter, the rising dragon China has entered the fray, offering to play the part of a peace-broker in the conflict resolution process. It is obvious that this offer made by the CCP will play right into its grand scheme of asserting more influence over a wider-spread area in the world and eventually realize its full potential as the United States of America’s ultimate rival. If this comes to be, then the consequences will spell out bad news for the large number of countries who have managed to irk the Xi Jinping-led administration and make the US look like a withered away shadow of its former self. In the worst-case scenario—which is saying a lot given the fact that we are currently under the grip of a raging pandemic—this latest round of the sanguinary Israeli-Palestinian faceoff could have very well been the spark that ignites the Third World War. However, at this very moment, the dark clouds of violence have finally dissipated after multiple de-escalation requests were ignored by both sides.

This raises a question—why have most of the EU nations and UK been relatively inactive in this matter of their own creation? The EU foreign affairs ministers have claimed to be searching for solutions to put a stopper to this latest violent Israel-Palestine clash—but their historical track record shows that this claim does not carry a lot of weight. The current foreign policy chief of the EU, Josep Borell, issued watered-down statements asking Hamas to end their rocket warfare on Israel and the latter to “act proportionately” while avoiding civilian casualties. This kind of lacklustre response stems from EU’s long history of being vehemently divided over the issue and as such it would not do justice to Mr Borell to blame him for it; the 27 member states have not displayed any sense of solidarity with him, leaving him to basically just speak for himself. And while the very nations who are responsible for the creation and continuity of this ordeal avoid responsibility, the precariousness of the situation keeps rising. Islamic countries such as Turkey and Malaysia have expressed their support towards Palestine in this conflict and have severely condemned Israel for its allegedly forceful occupation of Gaza. The problem with Muslim countries getting involved in this situation is that the possibility of Islamic agitation returning with greater force also increases. Cases of anti-Semitism and anti-Islamism have already begun to surface in the UK and if the crisis persists any longer (with obvious results) then these sentiments could very well spread to other parts of the world as well, which is exactly what certain extremist organisations are counting on. France has the largest Muslim population in Europe and has surprised the world by not being empathetic enough towards the plight of Palestinian civilians. Germany, which still reels from the traumatic horrors of the holocaust will—not surprisingly—provide high levels of support to Israel even during instances of sharply evident transgressions by the latter, a truly uncanny method of attempting to repay the Jewish community. Germany is also the most powerful nation within the EU and most probably uses its clout to restrict much of the decisive actions. Hamas has already been designated as a terrorist group by the EU officials, in which Palestinians find irony since they have repeatedly accused the Europeans of turning a blind eye to the violations of international law and decades of brutal human rights abuses by Israel. It is safe to say that in the geopolitical context of the Israel-Palestine conflict, the UK and EU are nowhere to be found despite having been largely responsible for its creation with the Balfour Declaration in 1917.

The Question of Accountability

Europe can be rightly accused of hypocrisy in the context of having washed their hands off the decades-old Israel-Palestine conflict. One can go further beyond the Nazi-Germany sanctioned anti-Semitism in Eastern and Central Europe to the mid-late 1800s when Jews were predominantly treated as monstrous outcasts in most of the well-established towns and cities. The Jewish community was driven away, isolated and had been ridiculed for centuries. In the 1890s, the notorious Dreyfus Affair in France, which saw the unjust imprisonment of a Jewish French military officer for acts of treason committed by a Christian officer, was the starting point of the Jews beginning to consider having a separate Jewish nation. Then the Holocaust during the Second World War proved to be the final straw which reinforced the Jews’ decision to flee the European continent and seek refuge in Palestine. In the aftermath of the holocaust, the Jewish survivors faced hostility from the local European population. Some of these survivors were killed violently over dissatisfactory reasons in Poland, Slovakia, and Hungary. The UK too, had adopted discriminatory and restrictive policies towards the returning Jews, which forced the overall Jewish community to further make their exit from the continent and seek a separate place for their continued survival. Over the course of time, the sheer influx of Jewish people led to the rise of protests and indignation amongst the Palestinian population who were afraid that they would lose their own place in their own homes.

The Israeli-Palestinian conflict is truly a complex one in which it is extremely difficult if not impossible to select a side—both parties present compelling narratives which draw upon empathy. Even though the Palestinians have been subjected to multiple cases of injustice at the hands of Israelis and other Arab governments, and Israel is always on its edge due to it being under constant threat from the entire Arab community, both sides can easily claim to be the victims of history. Considering the astonishingly arrogant move by Britain in 1917 when it unilaterally divided the Palestinian territory (under Ottoman rule at the time) land and cut it up into pieces, one might correctly conclude that European anti-Semitism and British diplomatic tactics lie at the root of the current bloodshed going on in the region. However, enlightenment suggests that it is unwise to carry the burdens of the past and instead seek to achieve a calm state-of-affairs in the present. As such, instead of the irresponsible stance taken by the EU and UK on the Israel-Palestine dilemma, it would do better to adopt a more hands-on approach and actively do whatever it takes to not only de-escalate the situation but also find a permanent solution to it. Perhaps the Europeans are now far too rusty to be able to provide any security guarantee to either of the two conflicting parties, but they can at least pool in from their vast financial resources to help the Palestinian economy grow and be protected from further violations of rights while, at the same time, minimizing Israel’s insecurities. The United States of America needs to be questioned publicly for its consistent policy of supporting some of Israel’s questionable activities; supporting the continued existence of Israel can be viewed in a positive light but American support of the Israeli government in its inhumane atrocities is another. The American hypocrisy gets exposed in this matter in the most exhilarating manner as Israel has been accused of secretly harbouring nuclear weaponry, something which Washington has never pointed a finger at. Yet at the same time, it is hell-bent upon regulating Iran’s nuclear stockpile as well condemning any other country that dabbles with nuclear technology. If Europe was the creator of this unholy conflict in the Middle East, then America has been playing the part of the devil’s advocate by fuelling it.

Possible Steps for a Lasting Solution

To solve this crisis and put a permanent end to it, first, we need to realise that years and years of peace process negotiations simply will not suffice. There has been no positive development in the direction of addressing the continued Israeli expansion of settlements on Palestinian territory. This is currently the primary force disrupting any existing solution mechanism backed by the international community. Deploying peace keeping forces in the border area like in the past will also prove to be ineffective since this conflict cannot be solved with a ‘crisis mitigation’ approach; the underlying tensions themselves need to be dealt with. Second, the proposed UNSC reforms must be actively discussed, and a resolution be reached to curb the exorbitantly arbitrary veto powers of the members. Permanent membership of the council must be expanded to create a more balanced and fairer environment, one that can serve as a counterweight to the power-plays of USA and China. Third, the two-state solution must be pushed forward even more vehemently as it is the only way for the conflict to subside in the future. As economic dependencies increase, the other Arab nations are increasingly becoming desirous of conflict avoidance.  Fourth, it must be recognised that the activities of Hamas will further hurt the Palestinian cause due to their extremist approach to an already sensitive Israel. Combined international efforts must be made to ensure the more rational and logical Fatah’s return into the political arena. The driving force behind these four broad measures should be the new emerging powers in the world as well as more compassionate countries in the European Union with the USA taking a break from fanning the flames; the Chinese accusation of American hypocrisy will resonate for a long time to come. These measures will be pivotal in the goal of ensuring a more secure future with one less problem.

Dibakar De
Author is a post graduate student of International Relations from Amity University. He has done his bachelors in Political Science. As an aspiring political analyst, his area of interest predominantly lies in East Asian countries and their administrations.
Tags:
Share:
Share this...