Finessing the Palestine-Israel Conflict: How Peace is Possible 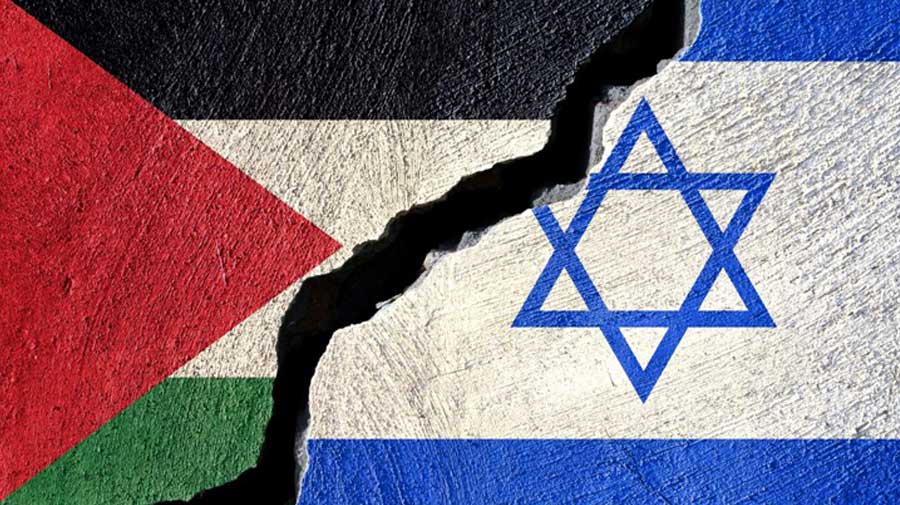 Finessing the old tension between the Palestinians and the Jews is not a cakewalk. It not only requires a grand exercise of mutual trust that has already plummeted to the bottom line. It requires a compromise formula with good sense laced by the strong political will of both sides in the first instance. Of course, there could be negotiation but not from the point of strident intransigence or to repeat historical hostilities. In fact, this Arab-Jews problem has witnessed a significant shift in the post-Cold War era with both sides seeking the intervention of the US which calculates its own interests over and above the urgency to reach a benign solution. Thus peace continues to elude Palestine which suffers the brunt of occasional assault that lays bare not only its own inability but also which raises the question of international voice against injustice and of some supra-national institutional pressure to bind Israel to some terms of compact for the sake of peace and regional stability. Even today when the US is sending its peace envoy the question is how far it will help navigate the situation towards a successful direction because given the US tilt towards Israel any formula that it may suggest would obviously suffer from a legitimacy crisis. America’s doublespeak is therefore clear because its arms lobby is very powerful and they are not going to change the pro-Jews approach. How then its peace proposal and mediation with Palestine could be balanced and acceptable in the eyes of the Arabs? That is why even when US sends its new secretary of state Anthony Blinken for a middle east trip for a ceasefire between two warring sides, it seems too late and too small a step that can hardly match the intensity of the crisis. First of all, it is not trustworthy at all due to US stand of prolonging neglect of the Palestinian crisis. Secondly, more deleterious tendency or hidden agenda of America’s neoconservative plan for remaking the whole of West Asia emanates from its “policy for the region in which the Islamic right wing was to be honed as the main force at the disposal of Euro-American power and the reactionary Gulf monarchies as the great bulwark against secular Arab nationalism.” (Frontline July 25, 2014). This clearly exposes the contradictory American posture of what it advocates and what it pursues. Thirdly, every one of us has witnessed how the former Trump administration accorded recognition to Jerusalem as the capital of Israel in early December 2017. It emboldened the position of Israel vis-à-vis Palestine, hence praised by Netanyahu because Palestine also lays claim to the old city as their capital but its access is controlled by Israel. No doubt the US decision of recognition was divisive but it helped Israel to marshal US support to broaden its regional status and to project its international political profile. According to Aaron David Miller of the Carnegie Endowment for International Peace, now Israel can do business with key Arab states without having to compromise on the Palestinian issue and of course to marshal Arab state support in his campaign against Iran. But it is always risky because pampering is a discredited policy in international politics. So, if the US and new Arab friends of Israel sit idle even in the face of the Israeli assault on Gaza it might in all likelihood encourage Netanyahu to annex the West Bank. Then the situation would be inflamed and go out of hand.  So many questions writ large viz. Where is the United Nations? Is peace a figure of speech of International Conferences only? Dark clouds of premonition hang like a Damocles sword.

The Israel-Palestine issue is one of the world’s most enduring hostilities, with the Israeli occupation of the West Bank and the Gaza Strip (Israel disengaged itself from the Gaza Strip in 2005). It is to be noted that today’s Israel is distinctly different, more ferocious and powerful from the one that it was in 1948. It is not only confident and emerged triumphant from wars but also its base entrenched in Zionist ideology that backs the state as it clashes with the idea of independent Palestine statehood. On the other hand, the victory of Hamas as the Palestinian militant group has complicated the scenario because there is a political struggle within Palestine among groups like PLO and Hamas. Earlier there was embarrassing allegations that PLO was engaged in terrorist activities that hampered the peace process. This was the reason why in the past Arab-Israel negotiation or Israel-Palestinian peace process could not be advanced without taking into account the positions adopted by relatively smaller but nonetheless important regional groups like the Islamic Jihad. These groups are constantly vying and jockeying for power and gradually a ground was created to undermine the moderate elements so that the extremist forces like Hamas could seize control of the ground. Now when Israel is launching an attack and Hamas might prepare to counteract, it seems that violence over a period of time is winning remarkable legitimacy as the situation revolves around a dismal vicious circle of Israeli-inflicted brutality followed by protests, then Israeli counter-action and revenge by Hamas. So, the situation is locked in a state of violence and counter-productive consequences.

We also need to understand that the Israel-Palestine issue is an emotive one and already rumblings of Arab discontent are evident. Of late the Foreign Minister of Jordan warned Israel for such “war crimes” meted out to the Palestinians. So, it does not seem gullible to believe that things would be easier for Israel or its traditional godfather the US to propagate that there exists Israel-Arab detente after the peace deal in August 2020 with the UAE. Rather we want to contend that without resolution of the long-bedeviled Palestine issue, there cannot normalization of relations with Israel. As Hamas cannot be trusted, and Hezbollah’s nexus cannot be ruled out, so under any pretext the innocent Palestinians should be targeted and punished to the utter disregard of human rights and explicitly to sabotage the idea of a two-state solution. In fact, indiscriminate bombardment even when there is no declaration of war is essentially the “politics of showmanship” which is a compulsion for Israel.

On the other hand, we have to be very clear that lasting peace cannot take place until and unless the Palestine authority entrusts Hamas with appropriate authority to negotiate with Israel. Within the Westphalian system of international relations, Israel is not bound to enter into a dialogue with a non-state actor. On the other hand, there is no denying the fact that groups like Hamas has gained both muscle and political space to shape the region in their image. In addition, it also seems that Iran calls the shots from behind the scene and its continuous backing of political Islam might aggravate the situation. Hence, we propose the following steps for steady progress towards a permanent solution:

iii)        Embargoes on Iran is not only encouraging it to go nuclear but also creating a deeply resistant attitude to western hegemony by strengthening the hands of clergy and Islamic hardliners. The situation of Palestine might complicate as it falls within Iran’s regional theatre of activism. So, the US should think of lifting the embargoes on Iran.

iv)        Deeply aggrieved by Washington’s handling of the issue and its failure to broker the Israeli-Palestinian partition deal, the Palestinian President once said, “We count on India, with its status as a great power, its historical role in the non-aligned movement and in international forums…” Therefore, we believe India along with the UN should play a constructive part in solving the Middle East crisis especially the Palestine issue.