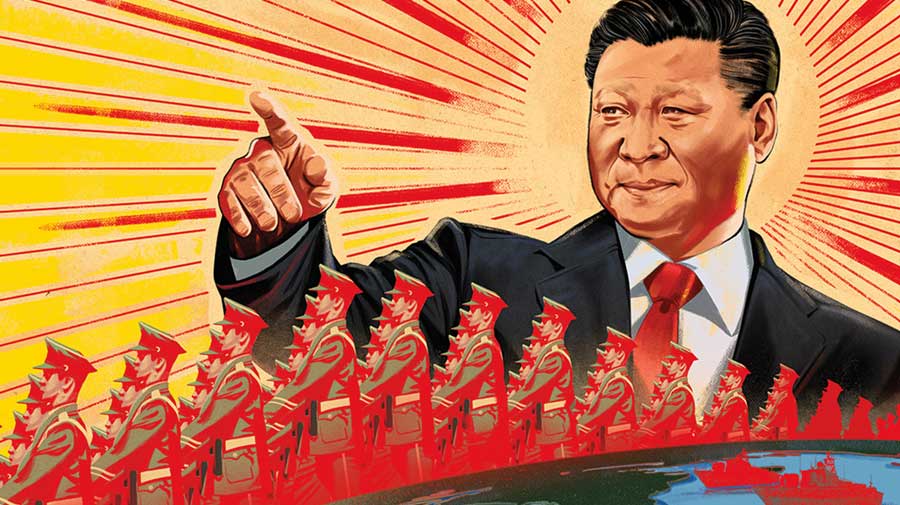 The Chinese Foreign Policy can be understood through different connotations wherein firstly it is imperative to take note of the historical events at the time of Zhou Enlai the tactic adoption as a pacifist one and not being upfront or aggressive in its approach taken up by Xi Jinping. The example of the Bandung conference is a suitable illustration of how China deliberately wanted to maintain a low profile by giving the baton to Nehru to lead forth respectively.[1] In accordance with this strategy is the Cold War event of being casted as a mediator by the opening of border talks between the Soviets and US. Henceforth, the continuance of this legacy by Deng Xiaoping in the 1980s did reward China and was a fruitful time for them with no economic curtailment in form of sanctions despite the awful Tiananmen incident happening. In, addition to all this was the bonus offer of getting assurances from the European Union and US where China would be transited into a market economy altogether. So, shrewd was the Chinese foreign policy by having the potentiality to masquerade the crude face it possessed and showcased on the domestic front as well but eventually didn’t deter its world political relations.

The historical orientation can also be ascertained through the 1962 India- China war in relation to the assured belief by V.K. Krishna Menon as well as Jawaharlal Nehru that China cannot attack as it does not have the willingness to make such an aggressive move. Therefore, the self- assumption of categorizing Pakistan as the only plausible threat proved to be detrimental for the Indian interest. Thus, eventually realised India of being certain despite uncertain attitude reflection and the problem creation can be from both sides.

Military authoritative- In accordance with the recent clash during the pandemic that happened in the Galwan Valley is inclusive of the preconceived notion of the Chinese strategy of five fingers of Tibetan palm falling under the categorization of territorial incursion or expansionism. And, this ideology can be proved through the school textbook depiction of these five fingers which comprise Ladakh, Nepal, Sikkim, Bhutan and the North-East Frontier Agency (Arunachal Pradesh) as a part of China. And, along with this is a propagandist framework of the Chinese press and radio allowing Naga and Mizo dissidents into China for refuge and training.

The regional expansionism in the South China Sea continued unabatedly without any interruptions despite the pandemic situation of whether be it in Paracel Island wherein the encroachment of Vietnamese sovereignty is hampered upon or be it Natuna Sea which is presumed to be a disputed area between Indonesia and China. And, in correlation to this is a research station established by the Chinese military on Kagitingan and Zamora Reef falling under the jurisdiction of the West Philippine Sea also comprises of disputation issue. Thus, in altogether Vietnam’s stance has been amply clear of being supportive of US freedom of navigation operation (FONOPS) but the other countries have a lackluster attitude towards China.

The recent step taken in terms of National Security Law did eventually tarnished China’s stance of toleration and the repercussion of this was the suspension of the extradition treaty with China by most of the countries such as US, Canada, Australia, etc. And, altogether the UK did extend British citizenship to the Hong Kong British National overseas as this law meant to jeopardise the freedom and especially the pro-democracy supporters. Thus, to elaborate on the point is the article specifications were clearly detrimental to the foreigner’s sovereignty as well.

The surveillance network also comes into play in Chinese foreign policy and in order to elaborate on this point is speculation cast out by the US based cybersecurity firm highlighting the recent power outage in Mumbai could be the work of a Chinese state-sponsored group. And, these sorts of claimed attacks have happened in the past as well when the Tibetan government was in exile in India.

In terms of the pandemic taking place, China wasn’t subsiding its dominant attitude by showing the nuclear credibility as speculated and alleged by US of conducting the nuclear test at the Lop Nur test site in violation of the Comprehensive Nuclear Test Ban Treaty (CTBT).

China’s approach towards Africa during the pandemic was at variance to the aggressive posture but rather was a humanitarian gesture of providing medical protective equipment, testing kits, ventilators, medical masks and in some cases in cash as well through Chinese embassies in Africa.[4]The irony of the situation is that despite mistreatment of African nationals in Guangzhou city of China there is apparent economic donation diplomacy which eventually is a latent profit that Chinese encash on a later basis by vote bank politics secured in terms of Chinese candidature as the head of Food and Agriculture Organization (FAO) respectively.

The economic perspective is also the imperative part of Chinese Foreign Policy wherein China has created clone companies or the copycat versions of YouTube as Youku, Amazon as Alibaba, Google as Baidu and Facebook as Weibo. So, in all this case China is leading to Intellectual Property theft which was highlighted by the European Union in the World Trade Organisation of the amount of misuse China is doing of it. The other fact of elaboration is the Indian case where the dumping of goods happens such as USB stick, calculator, nylon cord, kitchenware, etc. So, altogether there is a tactic of expansion of market share and gradually paving the way for monopoly by the elimination of local industry. Henceforth, the Chinese government provides an export subsidy to its companies so that the trade surplus is maintained and also expanded judiciously. The other fact of debt trap creation in terms of Zambia or Kenya through encroaching on their national company or port is the tactic to do regional expansionism by taking advantage of the weaker position or the problematic economic situation that these countries are cobwebbed into respectively. And, the same notion also applies when it comes to Srilanka –Hambantota port at a lease of considerable years is a farsightedness creation of a military warship and in turn providing China an advantageous position when it comes to dealing with India.

The economic association with the National Security Law is turning the financial capital, GDP contributor and employment generator to Singapore respectively. So, this supply chain is drastically now channelized to Singapore as an alternative to Hong Kong which has in the current setting a stubborn policy.

Conclusively, the ascertained fact is that the Chinese stance of approaching things in an aggressive way is now creating trouble in the economic relations that it has developed. And, along with this clarifying on the American centric theory culmination of virus deliberately casted by China as a weapon no more holds that assertiveness as was a zoonotic virus, generally spread through bat but has yet to be proved in a complete sense. And, elaborating on the South China Sea extraction of energy resources, National security law, India’s territorial encroachment, surveillance network in Australia and other countries is now seriously casting a spell on the economic front and leading to the creation of an isolationist viewpoint by the other countries as well.

2.The Indian Express(2020)-Explained: What’s behind diplomatic tensions in the South China Sea?

Ishita Suji
Author is currently pursuing Master's in Diplomacy, Law and Business from O.P. Jindal Global University. She has completed her Post Graduate Diploma in International Law and Diplomacy from The Indian Society of International Law.
Tags:
Share:
Share this...