The Israel Lobby and the U.S. Foreign Policy: A Book Review 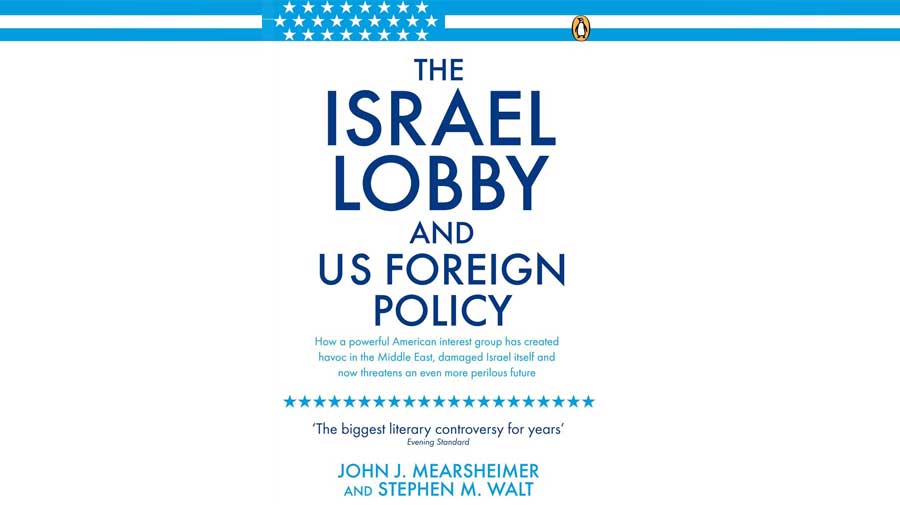 In the recent Israel-Hamas conflict, United States’ unwavering support for Israel demonstrates salient features of the U.S. foreign policy towards it. Many scholars, policy makers and realists have questioned what explains the unconditional US support for Israel since four decades. The Israel Lobby and the U.S. Foreign Policy is authored by John J. Mearsheimer and Stephen M. Walt in the year 2007. The book is an extended version of “Israel Lobby”, an article published in 2006 by the London Reviews of Books. While the article received appreciation by some, it remains the centre of controversy too. The book receives much criticism based on biasness, factual errors and Anti-Semitism approach. The authors aim to answer two questions through this book: does the special relationship between Israel and the U.S. fuel anti-American sentiments in the Middle East? ; If the uncritical U.S. support for Israel is not driven by either national interest or moral compass, what explains the reason behind ‘special relationship’?

The title precisely encapsulates the idea of the book in a simplistic and targeted way. Additionally, the content section of the book divides it into two parts: ‘The United States, Israel and the Lobby’; ‘The Lobby in Action’ comprising of eleven chapters. The essence of each chapter is reflected in the introduction and conclusion respectively. The first part of the book provides empirical and theoretical evidence to support the authors’ claim on the special relationship between Israel and the U.S. It also presents vital historical and contemporary reasons to understand the evolution of Israel-U.S. relationship since the cold war and its Independence in 1948. The authors provide several incidents from Bush Administration and Lebanon disaster, to Iraq war among others as they present the case for unequivocal U.S. support for Israel. The authors argue that Israel is a liability as it jeopardizes U.S. relations with the Arab world and also upsets the U.S. allies. The authors go on to say that U.S. uncritical support for Israel against the Palestinian cause drives terrorism and motivated Al-Qaeda leaders like Osama Bin Laden to spread anti-American sentiments in the Islamic world. The book also claims that the U.S. support for Israel is not based on democratic values. Authors argue that in the past United States has gone against democratic and non-democratic nations alike to pursue its national interest.

The authors emphasize upon the diplomatic, economical and military aid given to Israel by providing several empirical evidences and reports given by the CIA and financial authorities. They also elaborate upon the settlement and construction on the West bank. In addition to that, they also provide information on occasions where U.S. supported Israel in the UNSC and UNGA on several controversial issues that may undermine the interests and democratic values of U.S. globally.

American Realists and the Israel Lobby

The second part of the book establishes the modus operandi of Israel Lobby. The authors explain how the Israel Lobby manipulates the public discourse. They also suggest that all presidential candidates may differ on most issues but speak in the same voice when it comes to the interests of Israel. The same has been depicted in a Netflix series too. In the House of Cards, a Vice-Presidential candidate received heavy criticism because he published an article in the interest of Palestine in college days. The authors also highlight that if anyone tries to speak against the Israeli interests or questions the unconditional U.S. aid the lobby labels the person as a Jew-hater or anti-Semitist. It also captures the strength of Israel lobby and its special treatment as opposed to any other lobby in the country.

The book reflects the realist approach of authors that emphasize upon the national interest of U.S. It very well establishes the fact that the special relationship between two nations cannot align their national interests. The authors have been very convincing throughout as they give substantial evidence to prove why Israel is a liability to the U.S. The authors argue that the Israel lobby dominates and shapes the U.S. foreign policy in the Middle East. One can understand the realist principle of lack of trust between nations when the authors put across examples wherein Israel sold the U.S. military technology to China. To add more, despite the U.S. threats to Israel, the latter continued to develop nuclear weapons and made sure U.S. scientists don’t inspect the weapons and their potentials.

Should you read the book?

The literature is a good work to understand the historical circumstances behind the US-Israel relations. The book helps understand various ways of soft power and diplomacy. It explains how immigrants can become powerful if not checked. One could say that the Jews in U.S are so strong that they eventually dominate the public discourse in interests of Israel, a country so small in size and power as compared to the U.S. The authors have crafted proper theoretical and real examples to establish the strength of Israel lobby and its machinery against the U.S. national interests. However, they don’t emphasize much on collective interests of Israel and U.S. in the Middle East. The book also remains absent on the contribution of Israel lobby to the national interests of U.S.

The authors have successfully challenged the uncritical U.S. support of Israel and given proper reasons to question it too. The book also helps to understand the unprecedented aid Israel has received since its Independence in 1948. Additionally, authors offer an explanation to how foreign aid can backfire in volatile regions like Middle East. To conclude, the book is a well-researched piece of literature for scholars and students of International Relations.