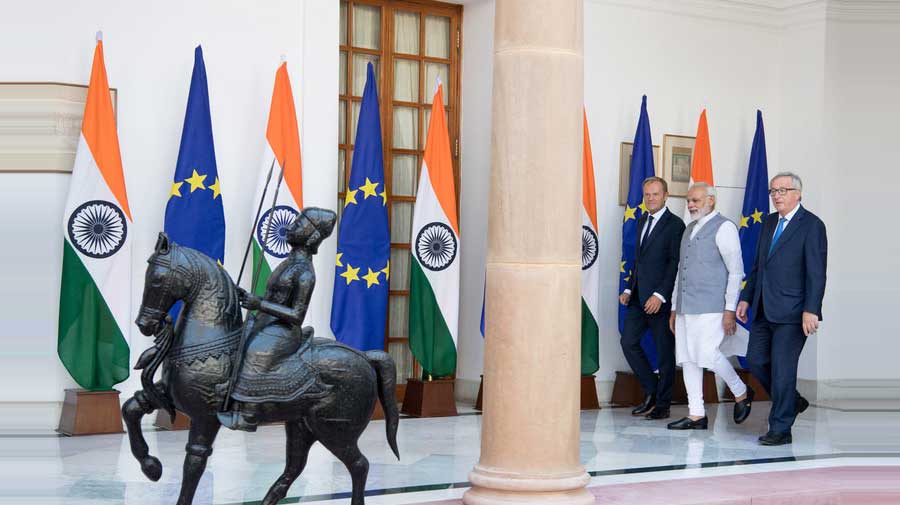 India and the EU have been engaged with each other since the 1960s with India being one of the first countries to establish diplomatic relations with the European Economic Community in 1962. A Cooperation Agreement signed in 1994 took the relationship beyond trade and economic cooperation and the first India-EU summit took place in Lisbon on 28th June 2000. While relations between the EU and India have tended to largely focus on trade and economic issues, both sides realised the need to move beyond trade and economic matters and the Strategic Partnership Agreement was signed in 2004 to enable wide-ranging cooperation including on crucial security-related issues impacting both sides. While there was general convergence on defence and security related issues there was a bit of a lull in the partnership due to new challenges and internal issues faced by both the EU and India and it was only at the 13th India-EU Summit held in March 2016 that both sides endorsed the EU-India Agenda for Action 2020 as a roadmap to guide and strengthen the strategic partnership giving a fillip to the cooperation and the 14th India-EU summit held in October 2017 adopted a joint statement on cooperation in combating Terrorism, the scourge of our times, which knows no borders.

The prospects for, and the imperatives of, close security cooperation between India and the EU are recognised by both sides to safeguard their respective national interests and ensure an equitable and just rules-based world order. To this end regular Foreign office consultations, including the Security dialogue are held along with the Cyber Dialogue, ongoing India-EU military and security cooperation including on Maritime Security, and an

institutional Dialogue on Counter Terrorism. At the virtual India-EU summit in 2020 an EU-India Strategic Partnership: A Roadmap to 2025 was adopted in order to guide and give impetus to the strategic partnership. Maritime Security is important for both India and the EU as both face traditional and non traditional security challenges including piracy, human and drug trafficking and maritime terrorism. Cooperation in the maritime domain has gained greater salience and urgency in the light of an assertive China, increasing its footprint stealthily across the maritime domain encompassing the South China Sea, the Mediterranean, the Indo-Pacific and in the Indian Ocean regions including China’s proposed Maritime Silk Road spanning and encroaching the Eurasian maritime space.

India continues to face terrorist attacks as does Europe. The recent wave of Islamist terrorism and the continuing migrant crisis from the unstable regions of the Middle East and Africa add to the overall growing instability and changing demography in Europe and impact the stability and security of the EU as a whole. It is therefore incumbent on the EU and India to work closely to ensure the security and stability of Asia, the Middle East and Africa, to end the radicalisation of youth and growth of terrorism which is impacting the peace and stability everywhere.

As the world transforms rapidly from unipolar to bipolar to ‘pluri-polar’, as economies sink and recover and grow at differing paces, new threats have surfaced in the post-Covid world. Key challenges that need to be addressed by both India and the EU include traditional security threats like terrorism, human and drug trafficking, and emerging ones arising due to the misuse of artificial intelligence, breaches in cyber security, weakening energy security, the fragile maritime security and health security scenario, including the threats posed by Covid-19 and possible future pandemics. Both the EU and India face some similar challenges, including the above, and there needs to be a convergence of approach to counter these threats posed by various

state and non state actors across the world, which are undermining the rules-based international system. Other serious threats that need to be tackled in a coordinated manner include the worldwide darknet, subversion of artificial intelligence and technology which are posing grave danger and undermining the existing systems and ways of conducting business and international affairs. Covert subversion, bio-warfare and chemical warfare are threatening the security of every country but especially of democratic, inclusive countries like the 27 nation EU and India and it is imperative that security cooperation between the EU and India be scaled up and integrated into existing mechanisms to ensure the safety and security and economic well being of the region. Countering radicalisation and violent extremism online is a common challenge and the misuse of crypto currencies to finance terror activities needs to be targeted and stymied; joint development of appropriate technology and methodology to counter this universal threat that knows no borders and does not require physical proximity is a challenge that needs to be addressed with utmost priority, utilising the technological advances and innovations in the EU and marrying them with Indian experience and knowledge in this domain that could be a game-changer.

It is a sign of the changing global geopolitical landscape that the focus at the India-EU summit held virtually on 8th May 2021 amongst other things was to strengthen the Strategic Partnership based on a shared commitment to democracy, fundamental freedoms, multilateralism and the rule of law. Both sides agreed to collaborate on digital and emerging technologies like Artificial Intelligence(AI), 5G and Quantum and High-Performance computing including through early operationalisation of the Joint Task Force on AI and the Digital Investment Forum. Fresh impetus was given to the India-EU Roadmap 2025 adopted in 2020. The Summit emphasised cooperation on international security, including non proliferation, disarmament and countering radicalism, terrorism and violent extremism and maritime security, cyber threats and cyber security. The India-EU leaders committed to advance global health

security through forging closer cooperation in combating the Covid-19 pandemic and economic recovery, reforming multilateral institutions and tackling climate change. Leaders agreed to cooperate for developing resilient supply chains, vaccines and active pharmaceuticals ingredients(APIs) and high standards of manufacturing of drugs and vaccines to combat the dreaded disease which has taken lives across the world but been particularly vicious in India.

To give concrete shape to the agreed elements at the Summit covering different aspects of the security architecture, India and the EU need to craft a joint strategy to deal with the emerging challenges which are threatening their very existence in the current form as well as the existing world order. Cyber threats and use of artificial intelligence to subvert the systems of adversaries (actual or perceived) are very real and pooling know-how and expertise in the EU and India to counter these and ensure a secure and rules-based world order is the need of the hour and this has been acknowledged by the leaders at the May 8th, 2021 Summit. While leaders have established the roadmap, the corporates and tech startups in India and the EU need to be encouraged to collaborate and share expertise and arrive at innovative cutting-edge solutions to deal with the new and emerging security threats. The urgency and the imperatives for doing so cannot be over-emphasised.

Amb Manju Seth
Author is a career diplomat, retired from the Indian Foreign Service in 2014. A former Ambassador and Consul General of India, her last assignment was as Ambassador of India to Madagascar and Comoros.
Tags:
Share:
Share this...