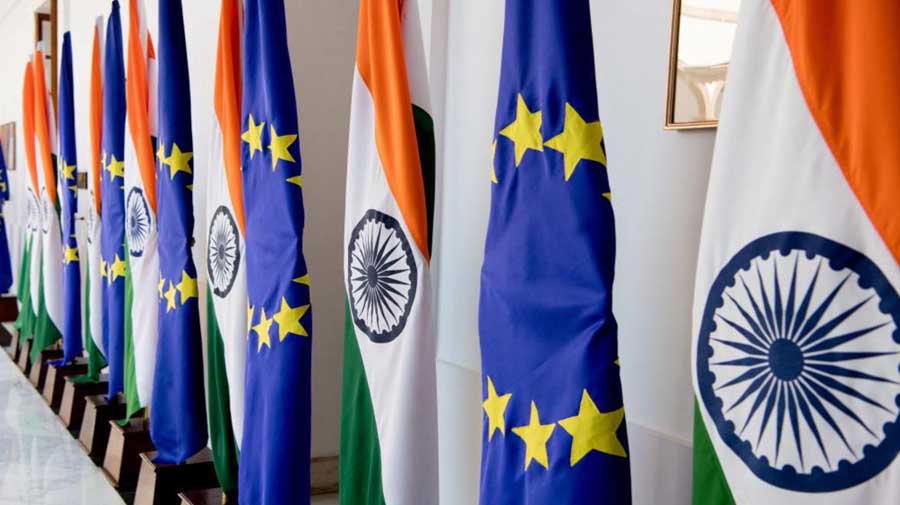 India and the European Union (EU) are keen to encourage a model of growth with equity, which is socially inclusive and broad-based. Trade and investment continue to be the cornerstone of their multidimensional relationship. Both have a shared belief in the rules-based bilateral and multilateral trading systems and convinced that deepening bilateral trade relations should support, rather than undermine, the multilateral route. Even though bilateral trade and investment have risen dramatically, there are reasons to conclude that current levels are still below potential. Against this backdrop, attempts have been made to revive the India-EU Broad-based Trade and Investment Agreement (BTIA), negotiations that began in 2007 but stalled since 2013 due to divergence of views on crucial issues. If successfully concluded, BTIA has the potential to bring real substance to the India-EU Strategic Partnership.

India-EU trade relations are backed by the Cooperation Agreement on Partnership and Development signed in December 1993, and the EU-India Strategic Partnership launched in 2004. Annual Summits further strengthen it. An improved agreement with India is seen as a vital component of the EU’s Global Strategy for enhancing EU companies’ global competitiveness.

In the annual ranking of EU’s major export destinations, India stood at thirteenth in 2003 and subsequently elevated to eighth in 2010. In 2020, India stood at the eleventh position, which was 1.7 percent of the EU’s total exports. Similarly, in the EU’s import ranking, India stood at the sixteenth position in 2003 and elevated to tenth in 2010. In 2020, India was in eleventh position accounting for 1.9 percent of total EU imports. Among the EU member states, Germany is the largest exporter and importer of goods from India. In 2019, total EU exports to India were €38.19 billion, and then declined to €32.16 billion in 2020. Similarly, in 2019 total EU imports from India were €39.57 billion, which also declined to €33 billion in 2020, leading to an €854 million trade deficit for the EU. The bilateral trade in services has also assumed importance touching €16 billion in 2009, which subsequently increased to €22.3 billion in 2015 and €29.6 billion in 2018.

Indian investors are also finding the EU attractive for investment and mostly concentrated in sectors like IT, professional services, manufacturing and automotive companies. In recent times, it has been observed that Indian companies are redirecting their focus to new promising sectors like renewable energy, value-based manufacturing, financial services, and creative industries.

Based on the report of India-EU High-Level Technical Group (HLTG) and commitments made at the 7th India-EU Summit held in Helsinki on 13 October 2006, India and the EU began negotiations on a Broad-based Trade and Investment Agreement (BTIA) in Brussels on 28 June 2007. In 15 rounds, the talks covered trade in goods, trade in services, investment, sanitary and phytosanitary measures, technical barriers to trade, trade remedies, rules of origin, customs and trade facilitation, competition, trade defence, government procurement, dispute settlement, intellectual property rights and geographical indications, and sustainable development. The last meeting was held on 13 May 2013 in New Delhi. After which, the talks stalled due to differences on crucial issues.

Major sticking points were the EU’s demand for market access and higher levels of tariff concessions in automobiles, wines and spirits, as well as government procurement. Apart from these, policies of India and the EU did not converge on issues like intellectual property rights, data security,services, agricultural exports, chemicals, dairy and fishery, registration of electronic products, and certification of telecom network elements. India could have potentially gained in the services sector. But giving work permits and visas were primarily the competence of individual EU member states, so the EU could not commit much. Moreover, the EU had different qualifications and professional standards. Both these factors made the trade deal less attractive for India. The differences that arose during the trade and investment talks were too wide to be overcome without a political push from the higher level.

The arrest and trial of Italian marines in India led to a backlash in the EU. The ban on Indian Alphonso mangoes and four other vegetables due to the finding of pests invited a strong reaction from India. Both these issues with different levels of gravity led to the deterioration of bilateral relations in the last decade and indirectly impacted the revival of trade talks.

For India, the UK was not only an important entry point to the EU but also accounted for 16 percent of India’s $53.7 billion exports to the EU in 2020. With the EU and the UK entering into a post-Brexit trade deal, India also needs to push for separate trade deals to its advantage with each of these powers. India has opted out of RCEP. But other proposed mega-regional trade initiatives like TTIP/TAFTA and TPP have the potential to create global value chains, which will drive down costs and raise product standards of European companies. India-EU BTIA, if concluded successfully, can give India access to such value chains. Moreover, learning from the pandemic, diversification of the global supply chains away from China is as vital for the EU economic resilience as for India. In this context, the India-EU BTIA can be a valuable mechanism because of the combined resources and expertise.

Though there have been efforts to resume BTIA negotiations, progress has been sluggish. After eight years, during the 15th India-EU Summit held in a virtual format on 15 July 2020, two sides agreed to set up a high-level ministerial dialogue on trade and investment. While pushing for the resumption of trade and investment negotiations, India needs to pitch for a quick “early-harvest deal” with the EU, which could be followed by a time-bound and balanced BTIA.Renewed thrust on trade talks amid Covid-19 disruptions indicates India’s commitment towards a rules-based world trading regime and integration with the global value chain.