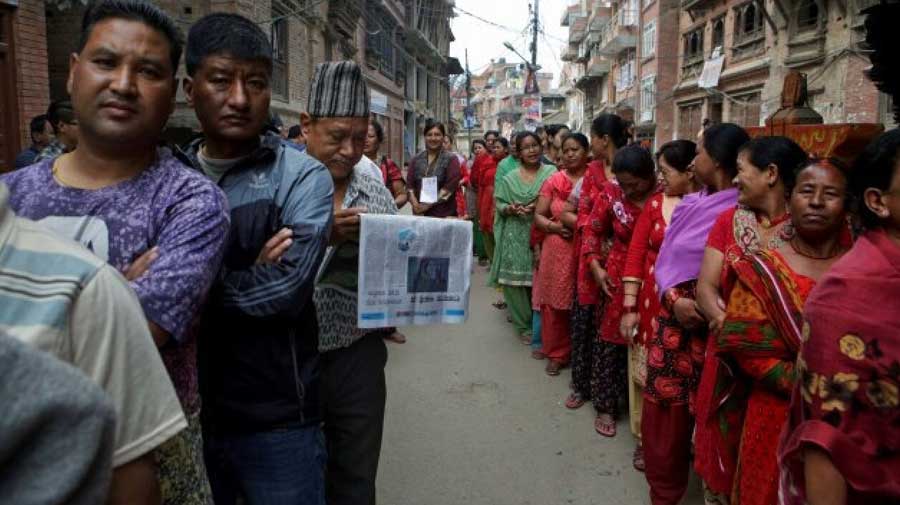 A political enclave in the Himalayas, Nepal is in a democratic transitional period in its current history. In between the North and the South of Asian power – India and China, Nepal’s challenge lies in navigating its identity and independence since its inception as a modern nation-state in 1768. A unification project in Nepal was contemporaneous with the great political initiatives and enterprising spirit of the Western Enlightenment in the Americas and Europe. Democracy is a relatively new design in the Himalayas wherein the monarchical system and its heritage was spanning for millennia in its polity. A country small but confronting a big challenge, Nepal is traversing tumultuous jolts in the domain of political and economic shocks given the nature of development and prosperity by modern standards. The idea of Nepal has seen challenges so often when the country intermingled with powerful neighbors and the international community’s policy influences.

Currently, political questions remind us that a Westminster style of government to dissolve parliament has been unacceptable to experts citing its costly political culture of stability, certainty and predictably. It has been a historical legacy of parliamentary political experiences since 1990 when three parliamentary dissolutions of the Government had been under the scanner of the judicial review with the verdicts to the similar Executive Order of different governments by the Supreme Court of Nepal. A recent verdict of the apex court will reappear in politics for sure even when holding the majority seats of a party in the Parliament. Because parties are beset with atomization interests of political and leadership culture running in their political DNA, ending the political impasse and cleaning the messy state of affairs, an early election is the best political option to get the fresh mandate of voters. As has been argued in my earlier writings, the case of electoral integrity partly ensures the quality of government and governance. Good governance and anti-corruption is a citizen’s inalienable right when the party in power is mired into controversy and omission and commission cum monetary abuses. It is a citizen-oriented and citizen-centric democracy that deepens the conviction and turns political ideas acceptable in everyday political affairs.

A triple matrix of national, regional and international entities challenge Nepal’s reasons for existence that is encapsulated in a strategy of survival and its struggle to maintain its unique political landscape on the map of the world. At these three levels, politics are public policy wise seduced or it becomes a redux and paradox of politics. To see the political-economic turbulences from different perspectives to make a political breakthrough, the elusive political stability has to be ended. Then some kind of checks and balances in the polity is achieved when governing performance is emphasized and universal political principles meet actions. Political ideas and knowledge when conducted in praxis, speedily fructifies democratic power politics and not just power politics. Thus in pursuit of liberty, justice, and truth, the art and science of government and governance accomplish when political time and political tide subsides or lessens reigning over the political chaos that has been the rule and curbs politico-administrative anarchy that is the hereditary norms.

In the arc of democracy in Nepal, the general election would place the parties in the right placement of political order. Furthermore, the political illusion of progressivism overshadows the state of affairs if its reforms, transform and perform better than previous political habits. In the meantime, governmentality is getting discretionary in the CORONA pandemic world that engulfs South Asia whereby underfunded and least developed public health system emboldens polity that becomes erratic, haywire and in constant disarray in ground reality when the sudden state of emergency happens. In minimizing political disorder, championing a political reordering needs fresh election in the country. Otherwise, the heating political conversations have to be beaten only with a political endeavor that delivers and not only keeps promises.

When political justice is delayed, political uncertainty looms in the everyday business of public affairs. Nepal needs to fix the problems of indisciplinary, non-responsiveness, or slow decision-making culture of the state mechanism and rein in legal impunity at any cost. Mainstreaming politics has to streamline the obesity of state apparatus and its rightsizing and downsizing in a rational, methodical manner and managing objective reality is overdue.

In the economic and financial field of activities, the public policy focuses on maintaining fiscal and monetary synchronization. The government if it addresses inter-allied sectors of political economy, Nepal can embark on a journey of liberal democracy that is sane, just, and open for political contestations that avow capitalism to prosper and liberalism to consolidate. It is not utopian thinking but a pragmatic cause to relieve the country from continually beleaguering daily public affairs that is becoming captive of political high sounding. Political talking misses the target to administer and manage policy implementation ecology to completely enforce the rule of law, due process of law, and better governance in emerging Nepal from the lost decades of infighting, quarrelsome and finger-pointing political conduct.

Now the time is ripe for political society to pledge its resolution to alleviate current political crises and take the country to the height of its eternal respect, grace and honor in political rejuvenation. When the media is galore with political frustration and everyday gloom, the political agenda is to discontinue impractical and irresponsible ways of blaming, naming and shaming and restart the political journey wherein the people sail the boat that is destined in their lifetime to a peaceful, happy and prosperous Nepal.