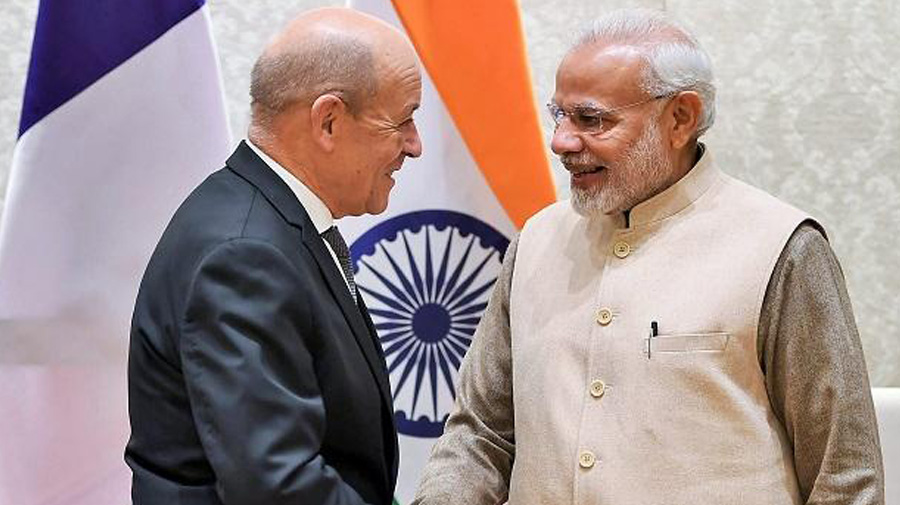 India and France share excellent bilateral relations since diplomatic ties were established soon after India’s independence in 1947, in all spheres including in the strategic arena. A large number of visits over the years including at the highest levels from both sides reflect the special nature of the ties and the importance accorded by both sides to further strengthen these ties. The strategic partnership established in 1998 based on shared values and a common world view has segued into close collaboration on counter-terrorism, defence cooperation, cybersecurity, maritime security regional and global issues and cooperation in the Indo-Pacific region. India-France relations have acquired greater depth in recent years and while the pillars underpinning the ties are defence, space and civil nuclear cooperation, the two sides are increasingly moving into new spheres and are collaborating in the areas of smart cities, railways, tourism, food processing, climate change and renewable energy with a view to diversifying and increasing investment and business avenues between the two countries.

To give impetus and structure to the relationship a large number of agreements and MOUs have been signed covering a wide range of areas including in the economic and commercial sector enabling clarity for companies on both sides to do seamless and smooth business with each other. The Joint Committee for Economic and Technical cooperation set up in January 1976 regularly reviews and monitors bilateral economic and trade cooperation and suggests ways to facilitate and enhance trade and economic ties and investments.

France is the 7th largest economy in the world and a key member of the G-7, OECD and G-20 and is a leader in innovative technology with strengths in aviation, space, food processing, transport, railways, agricultural research, etc. This presents many opportunities for enhancing investments, collaborations and business given India’s technological manpower strengths and at the same time the need for innovation and modernising of existing systems in India. France is the 9th largest foreign investor in India with a cumulative investment of US$ 9.67 b from April 2000 to September 2020.

Most of the big French groups have been present in India for a number of years either through subsidiaries or joint ventures and liaison offices. There are more than 1000 French companies, including SMEs, in India in sectors such as services, aviation, railways, cement, pharmaceuticals, defence, automobile, energy, food processing, etc.

The economic and commercial ties are an important element of the bilateral relationship. Bilateral trade has been increasing over the years but there was some setback due to the pandemic and in 2020 bilateral trade was Euros 9.04 billion. Bilateral trade in Services was Euros 4.467 billion in 2019 and includes areas such as travel, insurance, financial services, etc.

As mentioned before a major pillar of the India France business and economic ties has been defence cooperation, even though many of the main French companies were present in India. But after the pandemic derailed global economies and trade in 2020, along with China’s assertive and belligerent stance towards the US and the West causing concern, the US, France and Japan urged their companies to shift from China to other countries, including to India, for ensuring resilient supply chains. In keeping with India’s recent emphasis on Atmanirbhar Bharat and encouraging local manufacturing by MNCs, French companies have been focusing more on India and begun exploring avenues for diversification and new investment opportunities for setting up, or expanding existing, manufacturing units inIndia to export from India to third countries as well as to cater to the domestic market. India offers facilities for manufacturing with a rich talent pool, skilled labour and favourable market conditions and availability of requisite resources.

India has further simplified investment procedures and given incentives to facilitate the smooth functioning of the supply chain infrastructure in key areas of India’s strengths including the auto and auto parts sector, pharmaceuticals, APIs, garments, etc. and the French companies are looking to take advantage of these for mutually beneficial outcomes.

A number of French companies have indicated their intent to debut in India and existing companies are ramping up production and looking to use their India operations to serve other markets. For instance the luxury French baker Laduree plans to open an outlet in Delhi in 2021; the French dairy major, Lactalis, launched its immunity boosting UHT milk in India in 2020 to be produced at its plants in Telengana and Maharashtra; the French energy group, Total, bought a 20% stake in Adani Green in January 2021; another French firm, Exavision has tied up with RAXA security services Ltd, a GMR group company, to set up control centres for smart cities giving it an edge in implementing long range surveillance solutions by merging mechatronic,

opto-photonic, electronic and software technologies and other techno security solutions; Thales, the French defence and aviation electronics group has a variety of businesses in India ranging from data protection, ground transportation, defence electronics and seeks to double its India business in the next five years especially in the light of the opportunities offered by the Atmanirbhar Bharat initiative to partner with Indian domestic companies; Capgemini too is further expanding its business in India, after the acquisition of Altran, moving into the engineering services segment so both engineering services and R&D are engines of growth, having strengths in cloud, data & AI, connectivity, software and cybersecurity.

In the automobile sector where 100% FDI by the automatic route is allowed, Renault plans to expand itsproduction while Peugeot Citroen plans to set up an R&D centre in Tamil Nadu and assemble and manufacture vehicles with its joint venture partner, the CK Birla group with an investment of around US$ 107 million with a production target of 100,000 cars annually. In the Chemicals sector, allowing 100% FDI and investments through PPP mode, establishing the investment regions and incentives by the state have encouraged a number of French companies like Arkema to set up units in Chennai, Gujarat, Mumbai and Bengaluru, while ATC, Fiabila and Charabot have set up production bases in Chennai. In the Pharmaceutical sector, high production quality, low costs and regulatory conformity have led the French company Sanofi to set up production sites in Goa and Chennai and Boiron (homeopathic medicine manufacturer) and Bioderma too have production sites in India.

A fairly large number of Indian companies are investing in France in different sectors creating employment and this too has contributed to a more positive image of India in France. It is encouraging to see the gradual diversification by the French companies, away from defence and aviation sectors to other areas to boost business ties. As more French companies set up in India and see the advantages of doing business in, and with India, the future scenario can only be one of win-win and mutually beneficial.

Amb. Manju Seth
Author is a career diplomat, retired from the Indian Foreign Service in 2014. A former Ambassador and Consul General of India, her last assignment was as Ambassador of India to Madagascar and Comoros.
Tags:
Share:
Share this...