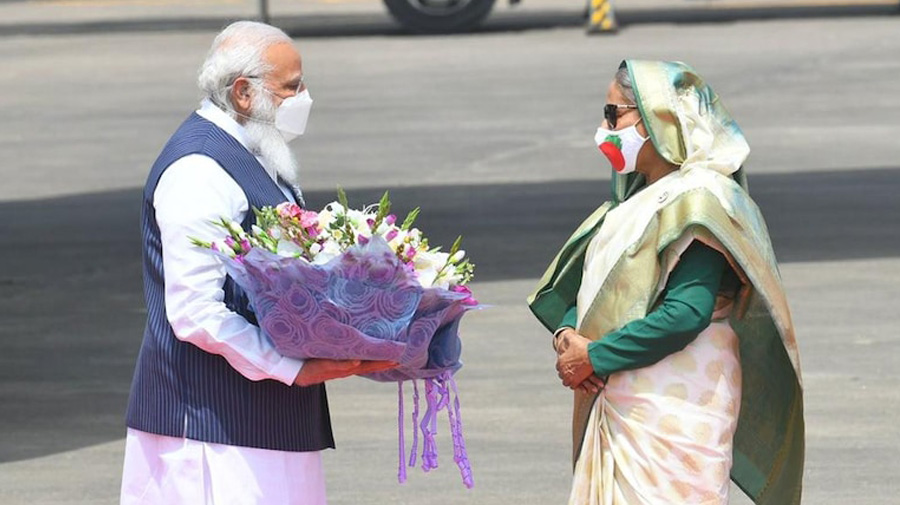 Tremendous excitement marked Prime Minister Narendra Modi’s visit to Bangladesh. While this was not his first trip to Bangladesh, a certain exhilaration marked his visit. As the Bangladeshi people celebrated their‘National Day’ commemorating 50 years of liberation from Pakistan, India joined in rejoicing. Along with the Golden Jubilee of Independence, Bangladesh commemorated the birth centenary of ‘Bangabandhu’ Sheikh Mujibur Rahman. India and Bangladesh also hailed 50 years of formal diplomatic ties, with plans to hold commemorative events in 19 countries identified by the two sides and jointly organise events throughout the year. The three reasons to celebrate were referred to by PM Modi a “triveni” (trijunction).

Preceding the actual visit, a series of developmental initiatives were announced, with both leaders meeting virtually on December 17, 2020 during which Modi described Bangladesh as a “pillar of India’s Neighbourhood First policy.” The ensuing visit on March 26-27, 2021 was PM Modi’s first foreign visit after the onset of the COVID-19 pandemic.To honour Bangladesh’s liberation, he visited the National Martyrs Memorial at Savar and met valiant ‘Mukhtijoddhas’ or liberation war freedom fighters. In profound recognition of India’s role in the Liberation War, PM Sheikh Hasina in her speech at the National Day stated that the “self-sacrifice, support and cooperation of the people of India during the Liberation War will never be forgotten.”

Cultural, linguistic people-to-people ties, economic interdependence and geo-strategic interests make India and Bangladesh politically vital to each other.On the eve of the liberation war in 1971, it was assumed that given the role that India had played in the birth of Bangladesh, both nations would always remain on the closest bilateral terms. But this was not to be,and there have been times that distinct acrimony marked the bilateral ties. The present dispensation on both sides of the border, led by PMs Modi and Hasina heralded a warmer relationship, cooperating on various economic, social, scientific, and technological areas. The affability that both leaders share, also challenges the traditional belief that bilateral relations between Bangladesh and India aren’t the warmest when the Awami League (AL) and the Bharatiya Janata Party (BJP) are in power in the respective countries. Led by a special commitment both leaders have overcome a phase of uneven times, towards close partnership in terms of economic and strategic interests.

The Visit was Preceded by Numerous Initiatives:

As stated earlier, actual the visit was heralded by the launch of significant development projects. On March 9, 2021 PM Modi virtually inaugurated the 1.9-km-long ‘Maitri Setu’ or the India-Bangladesh Friendship Bridge, built over Feni river connecting Sabroom district in south Tripura to Ramgarh in Bangladesh. PM Sheikh Hasina also attended the launch of Maitri Setu via video conference. Describing the occasion as ‘historic,’ she said, “Opening of any bridge is testimony to Bangladesh’s continued commitment to support our neighbour India in strengthening connectivity in the region… the bridge will also help Bangladesh’s trade with Nepal and Bhutan.”

The two leaders virtually inaugurated several projects, including three border “haats” or markets and the extended development of Rabindra Bhawan at Shilaidaha Kuthibari, a country house in Kushtia where Nobel laureate Rabindranath Tagore spent a part of his life. They virtually laid the foundation stone for the development of infrastructure at the Rooppur nuclear power plant being jointly built by Russia and India.The construction of five transmission lines at a cost of $442.11 millionwas green flagged, and Indian companies Larsen and Toubro (L&T) and Transrail Lighting Ltd are among those awarded contracts for the construction of power infrastructure related to the Rooppur nuclear power project in Bangladesh.

In a boost to connectivity, the two sides have also agreed to start a new passenger train service called ‘Mitali Express’ between New Jalpaiguri and Dhaka, as part of a project to restore the old rail links that existed prior to 1965.

Recognizing the significance of golden jubilee independence for Bangladesh and the role of Indian armed forces in the Liberation war, a 122-member strong tri-services contingent from Bangladesh had participated in India’s Republic Day parade on 26th January this year.

Apart from Modi and Hasina holding one-on-one talks, delegation-level talksdiscussed progress in areas such as trade, connectivity, health, energy and developmental cooperation.Modi invited 50 young entrepreneurs from Bangladesh, to visit India and present their ideas to venture capitalists. Five memorandums of understanding (MoUs) covering disaster management and mitigation, the establishment of a framework for cooperation in trade remedial measures, the establishment of sports facilities at Rajshahi College, cooperation between Bangladesh National Cadet Corps and India’s National Cadet Corps, and the supply of ICT equipment, reference books and training for the Bangladesh-Bharat Digital Service and Employment Training Centre were signed. Handing over a symbolic key to Sheikh Hasina, India gifted 109 ambulancesto Bangladesh along with 1.2 million doses of Covid-19 vaccines as a grant.In fact, Bangladeshhad receivedthe first consignment of Covishield vaccinesand is the largest recipient of made in India vaccines. PM Hasina thanked Modi for providing 102 million doses of vaccines of which 32 lakhs have been delivered as gifts under grant in aid and the rest is commercial.

In a gesture of special significance,Modi became the first foreign head of state to visit Tungipara the place of birth of Sheikh Mujibur Rahman, architect of the 1971 Bangladesh War of Independence. Among the various sites that he visited in Bangladesh was the Jeshoreshwari Kali Shaktipeeth in Satkhira, one of the 51 Shaktipeeths of the Puranic tradition. He also paid homage to Shri Shri Harichand Thakur, who founded the Matua sect and worked among the untouchable people of erstwhile Bengal Presidency at the holy place of Orakandi Thakurbari.

As PM Modi’s visit to Bangladesh was underway,supporters of radical fundamentalist Islamistgroups Hefazat-e-Islam (HeI)and Jamaat e Islami (JeI)organized protests in different parts of the country. The protests turned violent after Friday prayers in three cities—Dhaka, Brahamanbaria, which is near the Indian border; and the coastal city of Chattogram. Although Bangladesh is a largely secular democracy, fundamentalist Islamic views pose anti-India and anti-Hindu sentiments as a challenge Ms. Hasina’s party the Awami League. There is evidence to indicate that foreign elements wish to tarnish the image of a secular Bangladesh which has become has become role model for the entire South Asian region and will be soon graduating from LDC status. Several MPs from Bangladesh Parliament or Jatiyo Sangsad have blamed Pakistan and its Inter-Services Intelligence (ISI) for orchestrating protests and encouraging Islamists against India.It is a known fact that in South Asia radical Islam is fully funded and supported by Pakistan.At a time when Indo-Bangladesh bilateral ties are thriving, a ‘deliberate disinformation campaign’ is being run by Pakistan to ‘instigate’ Bangladeshi hardline Muslims against India. Islamic fundamentalists are fed with false propaganda to balk at India’s committed support to Bangladesh’s infrastructural development. India and Bangladesh must be prepared to jointly defeat the challenge posed by radical Islamists who are trying to derail the upward bilateral trajectory.

Reinvigorating our cultural affinity, reflecting on the legacy of 1971, and honoring the sacrifices of the liberation war, on both sides of the border is a break from the detached humdrum that had become the routine in the bilateral relationship. This time not only has the past been revisited, but the commonalities have also been stressed and for the future, a large ambit of the bilateral cooperation that can deliver gains to the common people on both sides has been identified.The present Indian establishmentappears firm that the water issue and dynamics of domestic politics no longer remain impediments in forging closer Indo–Bangladesh relations.At his speech in Orakandi PM Modi’s statement that Bangladesh is India’s ‘Shoho Jatri’(fellow traveler) in its mission of ‘Sabka Saath, Sabka Vikas, Sabka Vishwas'(together with all, for the development of all and with the trust of all) captures the spirit with which Indo-Bangla bilateral relations are poised to proceed.