The Myanmar Coup – The Tatmadaw And China 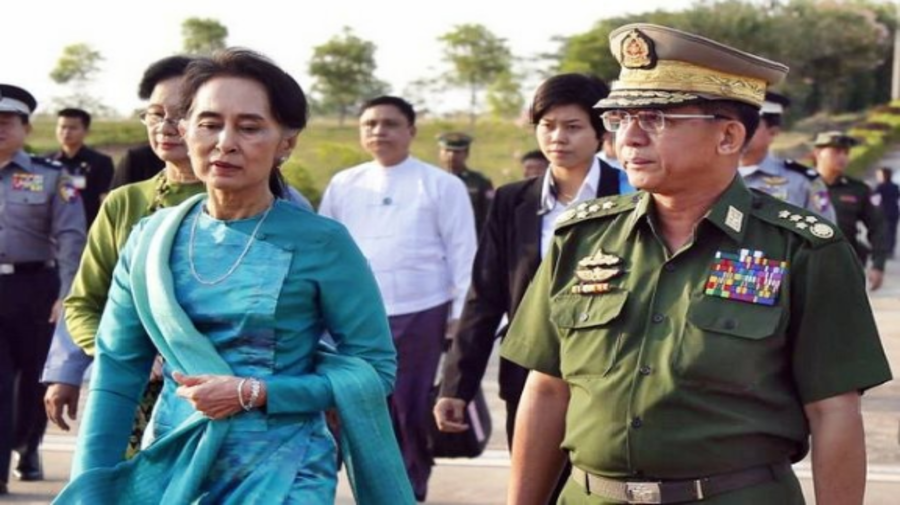 The democracy experiment in Myanmar came to a halt on February 1, 2021 with the military overthrowing the country’s elected government, arresting the civilian leaders and cutting off internet privileges. The coup sees the country returning to full military control after a short span of quasi-democracy that started in 2011. The military, which was in power since 1962, had decided to implement parliamentary elections and various other reforms. The country’s democratic icon and Nobel Peace Prize recipient Aung San Suu Kyi has been arrested and is facing charges in a secret court. Myanmar is seeing several protests and demonstrations across the country which has started following the coup.

The National League for Democracy (NLD) Government and the Coup Suu Kyi’s flagship policy was uniting different ethnic factions and armed groups. This process was however, progressing at a snail’s pace and had stalled over the past few years. The country was witnessing an increase in activities by insurgent groups like the Arakan army which was instrumental in furthering conflicts from the eastern to the western borders. Even though Suu Kyi seemed to tirelessly work towards the goal, her labour was not reaping much progress. Some critics have called this a strategic mistake and have suggested that the economy should have been more of a priority and it is only through economic development that Myanmar can achieve peace. The COVID 19 pandemic has completely exposed the poor public health system Myanmar possesses. Even though vaccines have begun to arrive in Myanmar through a Covidshield programme from India, a proper vaccination effort has not been seen. Not only has the country recorded a higher number of Covid Positive cases in the second wave but has also degraded the economy furthermore; “Only 16% of our respondents were poor in January this year before the COVID crisis hit, but now 62% are poor” said International Food Policy Research Institute (IFPRI) Senior Research Fellow Derek Headey in a study conducted in September 2020. The country’s GDP growth has been projected to remain stagnant at around 2% said the World Bank in a Press release.  The economy is said to have received less attention from NLD leaders with the peace efforts being their primary focus . The Rohingya crisis was expected to cause a sharp fall in tourism in 2019, however, it peaked at 4.4 million visits in 2019, according to the official data from the Ministry of Labour, Immigration and Population. The marginalised communities haven’t seen much growth either with the pandemic causing further damages to their lives. Expecting the hit, Myanmar in its first quarter of 2020 alone relied heavily on foreign aid amounting to 1.25 billion US Dollars low interest loans as of June 16 from international financial institutions and donors; $700 million from the International Monetary Fund, $250 million from World Bank, $30 million from Asian Development Bank, and $270 million from Japan. Even before the pandemic hit, the economy grew at around a meagre 6 percent in 2019 which was not an encouraging outcome for a nation in dire need of investment. Various business leaders are disgruntled with the lack of business growth and have complained about the lack of expertise of the cabinet ministers in handling economic affairs. Most of the civilian political leaders are activists by nature and have proved to be incompetent administrators owing to their inexperience. Suu Kyi has turned out to be more parochial and inflexible than her predecessor, former president Thein Sein.

It may be said that she has failed to defend rule of law over the freedom of speech. Many media houses have been intimidated and a few journalists were incarcerated.  The shock from the case of two local Reuters journalists being jailed for investigating into military atrocities on the minority Rohingyas reverberated across the globe. The NLD government has also actively used the draconian telecom law to its benefit under which the accused can be sent to jail when charged, even before a trial is commenced.  Contrary to popular belief and western standards of expectation from democracy, freedom of the press suffered a mighty blow with the NLD in power. Self-censorship was the norm.  Suu Kyi’s leadership was always seen in comparison to the leadership of Thein Sein who was instrumental in the opening up of Myanmar. Suu Kyi may be a popular icon for her pro-democracy movement leadership and her personal sacrifices, but she has proved to be an incompetent administrator. Some observers have noted that the NLD might have not seen the electoral success they saw in 2020 if they had not invoked the fear of this very military rule. There have been murmurs of an eventual military coup for years considering the administrative failures of the NLD government. Those rumours saw fruition with the Tatmadaw (the Burmese army) seizing control through a coup.The executive, military and judiciary is now controlled by Senior General Min Aung Hlaing. Some experts have been led to believe that Hlaing harbours presidential aspirations and might run in the next elections which the military is due to conduct in a year’s time.

The Chinsese Role in Myanmar

History repeats itself as is seen in China’s comparatively softer response to Military commander-in-chief Min Aung Hlaing taking up the reins in Myanmar. It is in agreement with China’s policy of the “non-interference principle”. China has notoriously maintained good relations with the many military regimes for decades previously even when the western democracies isolated and opposed Myanmar, imposing harsh sanctions on it, having faced similar opposition post Tiananmen Square. With the opening up of the economy, western countries revived their diplomatic ties and many foreign companies started investing in the developing country. This had effectively put an end to the Chinese monopoly over Myanmar. Thus, many experts believe that Tatmadaw’s return to power might be welcomed with open arms by China as it would gain the monopoly it previously held with the looming threat of sanctions by the western powers on Myanmar. However, the situation is far more complex. An example of China’s indirect tacit support for this coup can be noted in its decision to block a UN Security Council joint statement condemning the military coup in Myanmar in February using its veto powers.

China seems to lose a lot from this coup as it had put in a lot of effort to improve its image over the past few years working closely with Suu Kyi and her NLD government. China has been a dependable and dedicated ally of the Tatmadaw throughout all of its repressive measures. The generals had realised that they were too dependent on the Chinese and it was a major reason behind the reforms.  China was wary of this change in attitude and began to adapt to the new political realities. China had extended its hand to Suu Kyi and nurtured a great relationship with her. The military was not particularly happy with this development though and this suspicion might induce complexities in bilateral ties. The Tatmadaw suspects Beijing being involved in promoting several internal conflicts in Myanmar, with  General Hlaing having some harsh words for China. China is accused of sheltering anti-Myanmar elements and financing internal strives. China however continues to deny such charges. One must note that China is Myanmar’s largest arms supplier while assessing the future of bilateral ties between the two.

Both the civilian government and the military had seen growth in the past four years following the international condemnation received by Myanmar because of the Rohingya crisis. China continues to defend Myanmar’s Rohingya atrocities in the United Nations Security Council alongside Russia.  This has benefited Myanmar’s cause as there were reports that the US was reportedly reluctant on declaring the Rohingya crisis a “genocide” fearing that it will drive Myanmar closer to China. Myanmar has continued to support China on issues regarding Tibet, Xianjiang, Hong Kong and Taiwan.

China does not wish to see any sort of political instability and chaos at its border. China has many projects lined up under its Belt and Road Initiative and Myanmar plays an important role in those plans.  Myanmar is also vital to China’s strategic interests in the Indo-Pacific region. Peace and political stability in Myanmar is extremely important for the future development of the Yunan province and the energy supply from the Bay of Bengal. Myanmar might have to face sanctions from the US government making it more dependent on China.

While weeks had passed of relatively peaceful protests up until February 20, things took a violent turn when two unarmed protesters fell prey to the security forces in Mandalay causing widespread outrage. A general strike was held on February 22nd where millions of people across the country gathered and took to the streets. The military has erected barricades, deployed soldiers and stationed snipers along protest routes to the crackdown on demonstrators. The deaths of approximately  60 have been claimed by the first week of March while at least 38 succumbed on March 3rd alone. Authorities have detained approximately 1700 government officials, activists, journalists and others, said the local NGO Assistance for Political Prisoners Burma (AAPP). Additionally, an official belonging to Suu Kyi’s party has been reported dead in custody, his body showing marks of abuse. The military junta imposed martial law in the second week of March 2021 following the bloodiest repression of protesters. The military coup might be yet another turning point in Myanmar’s relationship with the world. Suu Kyi’s outspoken defence of the Rohingya genocide in the trial at International Court of Justice (ICJ) in support of the very same Myanmar military has made her vastly unpopular among western leaders.  The end of democracy and the return of the military in power will disappoint many international leaders. The military is expected to make economic recovery its primary goal. There’s also speculation over prospects of the military reaching out to the US to help them evade sanctions. However, the Rohingya crisis will also be a recurrent issue in such possible discussions.