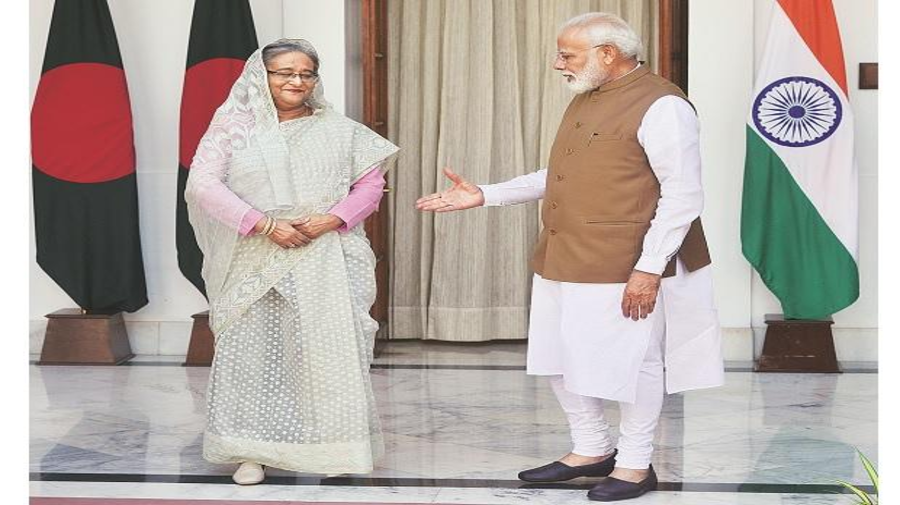 Domestic issues or compulsions often play a defining role in shaping a country’s foreign policy. This is evident in India’s relations with Bangladesh where although the latter’s strategic importance for India has risen in recent years; India’s domestic issues still hold considerable clout in its engagements with Bangladesh.

This visit is important from multiple points of view. This will be Modi’s first foreign visit since the outbreak of the COVID-19 pandemic in early 2020. Modi’s visit comes on the heels of External Affairs Minister Dr. S. Jaishankar’s visit to Dhaka at the beginning of this month.

The celebrations in Dhaka would also assume the form of a sub-regional conglomeration since, apart from Modi, leaders from Bhutan, Maldives, Nepal and Sri Lanka are scheduled to participate in this function.

Bangladesh is strategically important for India

India-Bangladesh relations have grown in past one decade and Bangladesh has come to assume a strategically important position for India in more ways than one. India has been engaging with Bangladesh on several fronts. On March 9, just days before his visit to Dhaka, Modi virtually inaugurated the 1.9 km long Maitri Setu or the India-Bangladesh Friendship Bridge built over Feni river connecting Sabroom district in Tripura to Ramgarh in Bangladesh.

During his visit to Dhaka, Dr. Jaishankar stated that connectivity between India and Bangladesh can change the face of the region. He said, “Fifty years (of Indian-Bangladesh ties) are over. Let’s think for the next 20 years. I would say most of all is to look at connectivity. I would pick connectivity as a big goal (for our relationship)”. Dr Jaishankar also said that for India, Bangladesh is a key part of neighbourhood first as well as Act East Policy.

Earlier, in December 2020, at the virtual summit between Modi and Sheikh Hasina, Bangladesh expressed its interest to join the India-Myanmar-Thailand Trilateral Highway. Through greater connectivity between both countries, Bangladesh could act as a catalyst for the economic development of the northeast Indian states.

Along with lack of connectivity, the insurgency has been a major factor restricting the development of the northeast Indian states. However, in recent years, there has been a drop in insurgency-related incidents. As per a report of India’s Ministry of Home Affairs, insurgency-related incidents dipped by 80% last year. This has been the result of combined efforts of Indian armed forces as well as cooperation from India’s neighbouring countries of which Bangladesh is one, the others being Myanmar and Bhutan.

Modi’s visit comes at the time when elections are scheduled to be held in West Bengal and Assam (that share border with Bangladesh) in April 2021. For India, Bangladesh remains important even beyond the poll cycle, but this time stakes are high since the BJP, India’s ruling party has put in a lot of efforts in these elections and is betting high on performing well in West Bengal, a state where it had almost negligible presence until now. The major issues for the BJP are:

While in Bangladesh, Modi is set to visit the Matua temple at Orakandi. Orakandi is the birthplace of Harichand Thakur, a guru of the Matua community. The Matuas are a Hindu community that came to India during partition in 1947. The community has a sizeable presence in the North 24 Parganas and Nadia districts which comes to at least seven assembly constituencies. In the 2019 general elections the Matua community had played an important role by supporting the BJP which won 18 seats, its best performance in a general election in West Bengal. This time also the BJP is hoping for support from this community which is why Modi is visiting Orakandi.

By passing the Citizenship Amendment Act in December 2019 India highlighted the situation of non-Muslims in the Muslim-majority countries of Pakistan, Afghanistan and Bangladesh.

Particularly, the declining Hindu population in these countries is a major issue and Bangladesh presents a no different picture in this case. The population of Hindus in Bangladesh was 13.5% in 1974 which declined to 8.96% in 2011.

In the past two decades, Hindus have been targeted in Bangladesh time and again. Post-elections riots of 2001, the anti-Hindu violence of 2013 and a recent attack by an Islamist group on 70-80 Hindu houses are some examples that highlight the situation of Hindus in Bangladesh.

The National Register of Citizens (NRC)

The presence of illegal Bangladeshi immigrants in India is another contentious issue between the two countries, particularly in Assam and West Bengal that share a border with Bangladesh. The BJP has been voicing concerns about this issue and has been accusing the opposition parties of including these immigrants in the voters’ list to gain an advantage in the elections. The BJP has promised a National Register of Citizens which will help identify the illegal immigrants. Defence Minister Rajnath Singh has also promised to block major border areas in Assam and West Bengal should the BJP come to power. Meanwhile, Bangladesh has been maintaining that there are no illegal Bangladeshi immigrants in India.

Rohingyas are a common problem for India and Bangladesh. A large number of Rohingyas are living in India and Bangladesh after fleeing Myanmar following a crackdown by Myanmar’s military. However, recently this community has become the reason to create an irritant in India-Bangladesh relations. A group of more than 80 Rohingyas, escaping from Bangladesh for Malaysia was forced to land on one of the islands of Andaman and Nicobar Islands on February 11. Despite repeated requests from India, Bangladesh has refused to take back these people.

Even after taking into account Bangladesh’s growing stature in India’s approach towards South and Southeast Asia, it is certain that at least during this visit of Modi, India’s domestic issues are likely to weigh heavy in its ties with Bangladesh. India and Bangladesh have had unaddressed undercurrents to their ties. Although these are surfacing now, both sides seem to be keen on putting a lid on it and focusing on the strengths that the strategic area offers. However, sooner or later, both India and Bangladesh must address these issues to be able to seamlessly play a greater role together at the regional level.