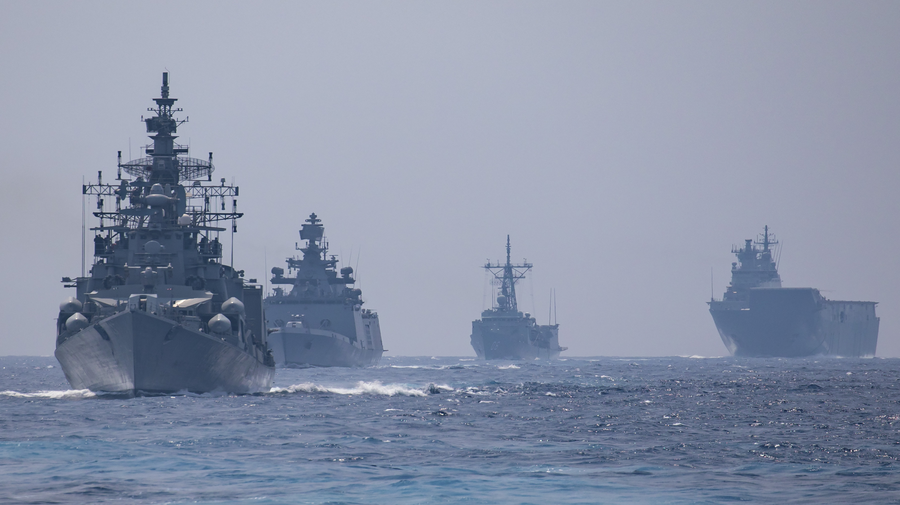 In the contemporary age, the term ‘Indo-Pacific’ has been seen as a new construct. The Indo-Pacific is a brand-new area in “India’s foreign policy” engagements, describing a transformation in India’s strategic setting increasing its perils solely from its continental frontiers to its maritime area. Indo-Pacific has structurally remodeled India’s foreign policy engagements and preferences, which will also set the foundation for its role in the new global security architecture. The rise of the Indo-Pacific as a new geographic area bringing collectively the Indian and the Pacific oceans outlines the new strategic substance of the 21st century. India has always been a nation with great national aspirations and is one of the most prominent advocates of the idea of the “Indo-Pacific Strategy”. Presently, the Indo-Pacific places vital emphasis on India by highlighting the nation as a pivotal performer being a multipolar region, contributing more than half of the global Gross Domestic Product (GDP) and population.

India’s position in the Indo-Pacific is held crucial by nations such as Australia, Japan, and the U.S. India has come to find a pivotal role as part of the respective policies of Australia, Japan, and the U.S as they began to set the Indo-Pacific as the new theatre for strategic competition. Maritime threats and Globalization has dimmed physical borders and increased awareness of the importance of ensuring secure seas for the unhindered mobility of energy and trade. In this way, the Indo-Pacific construct has presented an opening for India to enhance its strategic interests while acknowledging shifts in the security setting. Also, the emergence of China in the Indo-pacific challenges the security umbrella placed at the end of World War II and reinforced post- Cold War. Geopolitical competition in the Indo-Pacific has been blazing up and China is testing India’s historical dominance in the Indian Ocean Region (IOR). India does not want the hegemony of any player in the region and has wished to place itself as the front player in preserving an antagonistic climate through participation and innovative answers in a time of new great power conflict. The economic growth of China, coupled with its military modernization, continues to augment the capacity and the imperative perforation with India. Likewise, the 2020 Galwan valley clashes has made India recalibrate its China strategy and envision a more responsible position for itself in the Indo-Pacific. China’s expanding presence in the region shows a common strategic challenge for Australia, India, Japan, and the United States, though the priorities and capacities persist differently.

India has been an enthusiastic participator in mechanisms like the East Asia Summit (EAS), Indian Ocean Rim Association (IORA), Association of Southeast Asian Nations (ASEAN) Defence Ministers Meeting Plus that signify India’s growing responsibility in the Indo-Pacific. India has also been upholding the Free and Open Indo-Pacific (FOIP) approach and the Indo-Pacific Oceans Initiative (IPOI) apart from hosting multilateral naval exercise near the Andaman and Nicobar Islands, Exercise “Milan”, Exercise “Malabar” and “Tiger Triumph” military exercise. Through the Ministry of External Affairs (MEA) India also set up the Indo-Pacific wing and the Oceania division. India is also enhancing its Coastal Surveillance Network which is a string of radars that present extensive live monitoring of ship movements in the IOR and connect Indian radars to related systems in Mauritius, Sri Lanka, Maldives and Seychelles. India has likewise put forth the idea of SAGAR (Security And Growth for All in the Region), holds that the Indo-Pacific is open, free and inclusive, and one that is established upon a collaborative and collective rules-based system.

With the recent Quad alliance meeting, India, Australia, the US and Japan have focused on the commitment to upholding a rules-based global order, underpinned by respect for territorial integrity and sovereignty, rule of law, transparency, freedom of navigation in the international seas and peaceful resolution of disputes. Through this collective alliance, port infrastructure can also be improved for greater connectivity with the Indian Ocean littorals through infrastructure development drives like the Asia-Africa Growth Corridor (AAGC), Sagarmala and Blue Dot Network (BDN). Also, collaboration with the African littorals in the Western Indian Ocean Region (WIOR) will be indispensable to ensure that the Indo-Pacific region continues to be free and open for comprehensive partnerships, equality, and a rules-based system within the framework of sovereignty.

Indian Prime Minister’s 2018 Shangri-La address presented a structure for India’s Indo-Pacific priorities, as well as its concerns and hurdles. The logistical hurdles of India in the southern and western Indian Ocean should be addressed through access to military facilities held by India’s allies and partners. The country should also develop a Defence Diplomacy Fund, conduct Track-II seminars focused on maritime safety, capacity-building, and protection for Indo-Pacific coast guards, increase joint research programmes through India’s National Disaster Management Authority (NDMA) and conduct more naval exercises with other countries in the Indo-Pacific region. The Indian Maritime Doctrine in 2004 alluded to “the transformation in global maritime focus from the Atlantic-Pacific combine to the Pacific-Indian”. There is a re-emergence of the maritime space as the theatre for geopolitical conflict. India’s “Island diplomacy” also necessitates a more solid understanding and modernized efforts going past diplomatic outreach and cultural links.

Earlier in 2020, Modi had announced that Andaman and Nicobar islands would be developed as a “maritime and startup hub.” In this context, India needs to improve the infrastructure to deploy warships and planes in the strategically important Andaman and the Nicobar Islands. India should also review its foreign policy concerning smaller littoral states and island nations that can play a critical role in shaping India’s new security climate even though India’s connections with the west help in addressing its capacity clefts and is an essential aspect of its Indo-Pacific strategy. India’s increased engagement at the Forum for India Pacific Islands Cooperation (FIPIC) can also be a step forward. The government should also consider holding a bilateral “2+2” mechanism with the defence and foreign ministers of Australia, Japan and the U.S on regular basis along with track 1.5 dialogues on security challenges and sustainability issues.

While India will continue to increase its global engagements, it will likewise invest its capital and resources principally to advance its strategic interests in South Asia and the Indian Ocean. Southeast Asia being at the heart of the Indo-Pacififi c and ASEAN is also essential for India’s strategic interests, particularly for India’s “Act East Policy”. Adequate coordination based on converging strategic interests and policies is the most desirable way ahead in operationalizing Indo-Pacific cooperation. Due to COVID-19, the world is facing a time of ambiguity and geopolitics in this way will be played out in the maritime continuum of the Indian and Pacific oceans. As a leading global power and also considering its economic interests, diplomatic ties and long-term strategy, India should carefully craft an Indo-Pacific policy in the 21st century. Post-COVID India’s role has enhanced in the global platform with Vaccine diplomacy, Medical diplomacy and so on. Through its enhancing role, India should work with like-minded countries of the Indo-Pacific and also with other middle powers at various bilateral and multilateral platforms to uphold an amicable global order. The nations in the region should have equal entree as a right under “International law” to the use of common spaces on sea and in the air. Multilateral diplomacy, Strong naval capabilities and economic integration with nations are crucial for India to meet the hurdles within the Indo-Pacific region.