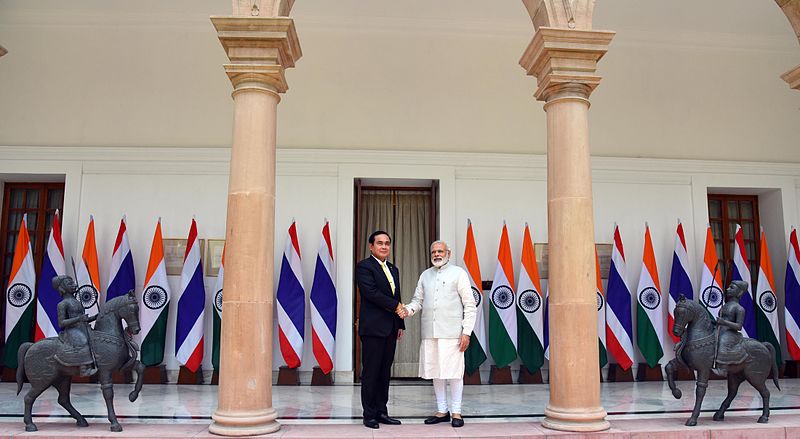 The relation between Thailand and India is bound by the values of peace, humanism and fraternity. Close ties of both nations existed for thousands of years sharing enduring and cultural values. India’s influence lives on in contemporary Thailand. The Indian languages Sanskrit and Pali have influenced Thai languages. Geographically Thailand and India lie at the heart of the Indo-Asia Pacific sharing an inland border with Andaman Island. Thailand is marked by rapid and sustainable development that makes an ever-greater contribution to peace, stability and prosperity in the region, playing an expanding role with India. India’s ‘Act East Policy’ is well complemented with Thailand’s Act ‘West Policy’ which provides a solid foundation to strengthen further and foster friendship and cooperation between the two nations.

Here lie the common interest and shared vision of both Thailand and India in the path of development in the international arena. Thailand and India’s relation are evolving at an ever-greater scope, frequency and level being the member of the Association of Southeast Asian Nations (ASEAN) comprising of ten members: Brunei, Cambodia, Indonesia, Laos, Malaysia, Myanmar, the Philippines, Singapore, Thailand, and Vietnam, to promote economic, political, and security cooperation. Thailand and India are making efforts to forge substantive links, engage in deeper economic and political integration and foster people-to-people ties among them.

Thailand-India is connecting resources and harmonising interests for continuous, more dynamic and more sustainable development being the regional partners linking with South and Southeast Asia. The two countries regional cooperation like the ASEAN, East Asia Summit (EAS) and BIMSTEC groupings as also Mekong Ganga Cooperation (MGC), Asia Cooperation Dialogue (ACD) and Indian Ocean Rim Association (IORA) amplify their strength, building together upon their roles and status as to build a common development space for peace, stability, cooperation and development that can more effectively respond to the challenges and establish a comprehensive strategic partnership.

Economic and trade cooperation is growing dramatically well with bilateral trade increased from USD 8.65 billion in 2014 to USD 12.12 billion in 2019. In ASEAN, Thailand is India’s fifth-largest trading partner after Singapore, Vietnam, Indonesia and Malaysia. Seventy-three years of flourishing diplomatic ties between Thailand and India spells the strong effort and determination of the two countries which will become the pillar of regional integration and development for significant contributions to peace, stability, cooperation and development in the region and the world.

Thailand-India Relation under the Ambit of ASEAN

The framework of ASEAN has expanded Thailand’s engagement with India augmenting its partnership for peace, progress and shared prosperity. To transcend the realm of ASEAN’s cooperation work in political, economic, security and people-to-people contacts the initiatives remain fructifying for Thailand and India expanding to other countries also. ASEAN Action Plan, covering various sectors such as land transport, maritime transport, border management, customs, immigration, logistics and safety and Public-Private Partnership (PPP). The India–Myanmar–Thailand Trilateral Highway Project and its extension to Laos and Cambodia were one of the ongoing projects to promote greater ASEAN-India physical connectivity and is aimed to connect the ASEAN Highway Network with the highway system in eastern India.

Connectivity plays an important role in building a strong foundation between the countries of the world that effectively transcends geographical and physical realms and opens prospective avenues for invigorating civilizational and people-to-people contacts. With shared values and common interest of India-Myanmar-Thailand Trilateral Highway project aims to promote greater connectivity in the ASEAN region. The Indian Ocean connects with several ASEAN countries, namely, Myanmar, Thailand, Malaysia, Singapore and Indonesia. They belong to the Indian Ocean Rim Association (IORA). IORA aim’s to promote peace, cooperation, sustainability and the blue economy.

ASEAN is the world’s seventh-largest economy and could become the fourth-largest by 2050. The volume of trade and investment flows under the framework of ASEAN has subsequently accelerated as compared to earlier figures. In 2019 bilateral trade increased at an annual rate of 11.2 per cent, from US$ 2.9 billion in 1993 to US$ 12.1 billion in 2003.

The total two-way trade increased by 8.4 per cent from US$73.63 billion in 2017 to US$79.83 billion in 2018. The ASEAN-India Framework Agreement on Comprehensive Economic Cooperation strengthens a strong foundation in establishing the ASEAN-India Free Trade Area (FTA). Thailand-India relations should strengthen in realizing the Sustainable Development Goals -2030 which also include the Mekong Ganga Cooperation. In the context of maritime security and maritime connectivity, Thailand and India cooperate for peace and prosperity in the region.

The future direction of Thailand-India relations under the framework of ASEAN sets a benchmark for significant contributions for an ever-flourishing comprehensive strategic partnership in the world. By implementing all the elements of comprehensive strategic partnership, Thailand-India relations will leap to greater height. Thailand and India should actively engage in building and shaping cooperation frameworks for peace, cooperation and development in the ASEAN region and the world.