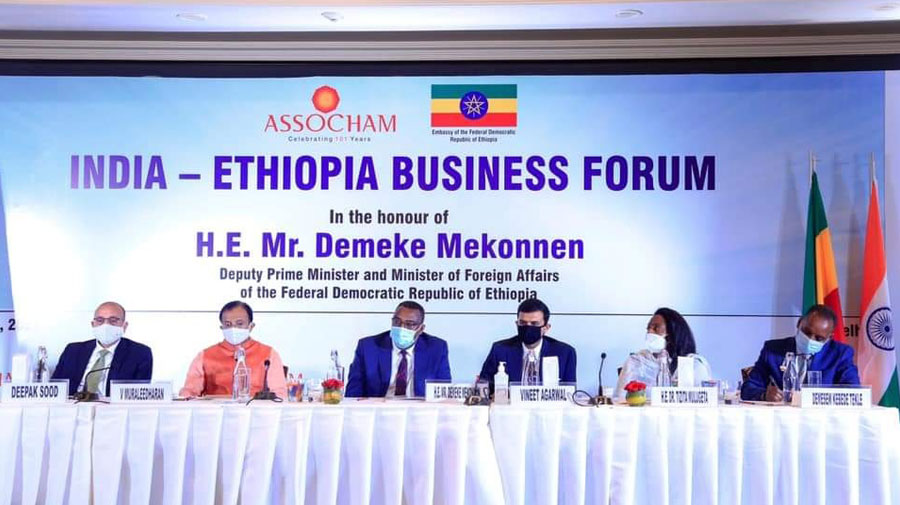 Even as trade and economic relations between India and Ethiopia are booming, there is still huge scope to expand and diversify trade between the two countries, said Mr V. Muraleedharan, Minister of State for External Affairs said at an ASSOCHAM event held in New Delhi on 17th February 2021.

“I invite Indian entrepreneurs to consider establishing high-quality educational institutions, of both technical and non-technical nature, in Ethiopia,” said Mr Muraleedharan addressing an India-Ethiopia Business Forum organised by The Associated Chambers of Commerce and Industry of India (ASSOCHAM).

The prestigious event organised in honour of Mr DemekeMekonnen, Deputy Prime Minister (PM) and Minister of Foreign Affairs of the Federal Democratic Republic of Ethiopia was the first physical high-level interaction organised by ASSOCHAM after the outbreak of the COVID-19 pandemic.

He said that the economy of Ethiopia, the second-most populous African country which has been posting a double-digit growth rate for over 15 years together with its highly-educated, skilled populace and sound economic policies makes it an attractive investment destination for Indian entrepreneurs.

Highlighting the expansion in economic collaboration between India and Ethiopia, the Minister highlighted that despite the Covid-19 global pandemic, Indian businessmen continued to explore investment opportunities in the African country. “During the last one year, we have had 35 new Indian investments in Ethiopia.”

The Minister also expressed appreciation for the Ethiopian government’s effort in creating a congenial environment for foreign investments and in particular for facilitating Indian companies to invest in Ethiopia and carry on their business.

Today there are over 607 Indian companies in Ethiopia with a licensed investment of over $5 billion (bn) employing about 75,000 Ethiopian nationals. About 61 percent of Indian investments are in the manufacturing sector followed by agriculture (14 percent).

He also said that Ethiopia is one of the largest recipients of India’s concessional loans or lines of credit in Africa. “I am glad that our development partnership covers sectors such as rural electrification and the sugar industry and consists of a total of six lines of credit amounting to $705 million extended to Ethiopia.”

The Minister added that the state visit of Ethiopian deputy PM will deepen ties thereby leading to a robust and long-lasting relationship and India would continue to partner in country’s growth story.

Sharing his perspective, Ethiopian deputy PM, Mr Mekonnen said that while bilateral trade ties between India and Ethiopia have reached $1.23 bn and over the years, although Indian exportable goods to Ethiopia has shown exponential growth, he rued that Ethiopia’s export to India remains as low as before.

Inviting Indian businesses, the Ethiopian deputy PM informed about a ten-year economic development plan unveiled by his government with a vision of ‘Ethiopia: An African Beacon of Prosperity.’

“We have also defined new frontiers of growth including digital economy, tourism, science and technology, human resource development and increase in productivity in agriculture and industry,” said Mr Mekonnen.

He also assured facilitation from his government for prospective Indian investments.

In his welcome remarks, Mr Vineet Agarwal, president, ASSOCHAM said that India is looking to work more closely with the context of the recently ratified African Continental Free Trade Area (AfCFTA). “The FTA should enhance trade with Ethiopia and other African Countries.”

The ASSOCHAM chief added, “We request the respective authorities and key stakeholders on both sides to expedite resolution of non-tariff barriers to provide greater ease of doing business for industry members. This will help boost the trade potential between India and Ethiopia in the short term, even as newer areas for a more broad-based commercial engagement emerge in the post-COVID world order.”

Sharing his perspective, ASSOCHAM’s Secretary General, Mr Deepak Sood said, “Ethiopia offers vast and diverse untapped scope for a range of business opportunities. This untapped potential is a call to India to forge stronger trade ties with Ethiopia and within the region.”