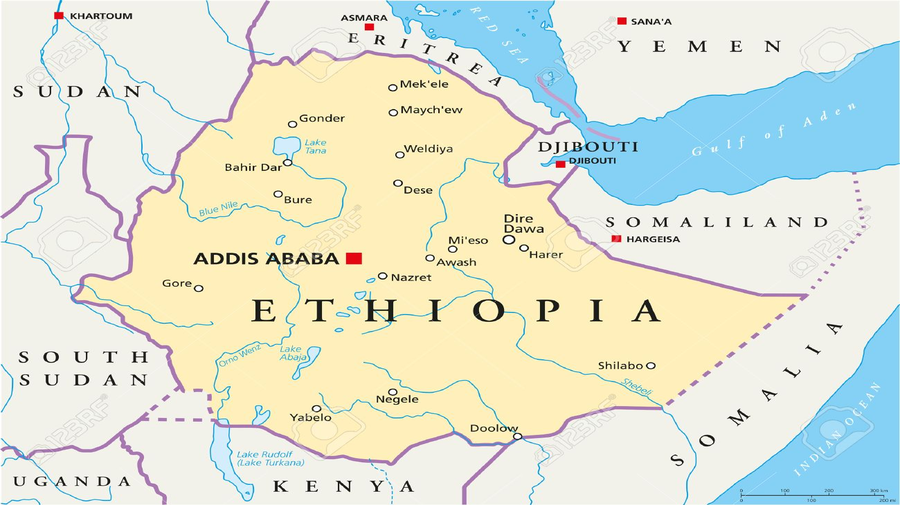 On 31 December 2019, Chinese media reported for the first time on an outbreak of viral pneumonia in the city of Wuhan. Months later, in early March 2020, coronavirus disease (COVID-19) was declared a pandemic by the World Health Organization. The pandemic has been one of the greatest global crises in decades, leading to unprecedented consequences that have been felt around the world. Since the emergence of COVID-19, over 100 million cases have been confirmed in countries across the globe, more than two million people have died, massive economic and social disruptions have occurred, and the livelihoods of billions have been greatly affected.

Although COVID-19 has been a truly global problem, respecting no boundaries, infection and death rates in many African countries have been much lower than initially feared. Many countries in Africa experienced exponential growth in cases much later than countries in other regions and have consistently confirmed fewer cases per capita.

Ethiopia, Africa’s second-most populous nation with about 111 million people, announced its first positive case of COVID-19 on 13 March 2020. By late-January 2021, it had recorded a cumulative total of 136,365 positive cases and 2087 deaths, the highest number of cases and deaths within the east African region and the fifth-most on the continent. To date, Ethiopia has carried out about two million COVID-19 tests, and while positive cases have been reported in all parts of the country, unsurprisingly the highest number of cases has been reported in Addis Ababa, the nation’s capital and largest city.

Then in March 2020, one week after announcing the country’s first COVID-19 case, the government implemented a further series of measures, including closing schools, limiting religious gatherings, introducing passenger limits on public transportation, postponing sporting events, sanitizing public spaces, and punishing unnecessary price hikes on consumer goods. This was followed up with the quick scaling up of diagnostic testing and a strict program of rigorous contact tracing, quarantine, and treatment. In addition, several universities repurposed dormitories into isolation centers, thus massively increasing national capacity, while dozens of quarantine facilities were established for returnee migrants. Although many countries around the world implemented long, strict lockdowns, Ethiopia instead encouraged the continuation of production and other economic activities during the crisis, helping to considerably ease the pressure on vulnerable socio-economic groups and those engaged in the informal sector.

Community awareness and education initiatives have been central to Ethiopia’s response. Political leaders and health officials have made regular public announcements and delivered daily briefings, while state-owned media and telecommunication service providers have delivered information to the population about safety guidelines and precautionary measures.

Notably, Ethiopia’s Prime Minister, Abiy Ahmed, who assumed office in 2018 and received the Nobel Peace Prize in 2019, reached out to the international community, calling for greater global assistance to Africa to manage the pandemic, relief for heavily-indebted African countries, and more cooperation from multilateral organizations.

Ethiopia’s multifaceted response to COVID-19 has been complicated by several factors. Despite years of considerable economic growth, the country maintains limited financial and human resources, as well as a relatively weak health system, underequipped facilities, poor infrastructure, and a chronic shortage of health workers. Furthermore, Ethiopia has been hit by the worst locust invasion in decades, placing strain on scarce national resources. The destruction of tonnes of cereals and several million hectares of pasture has threatened development gains, increased food insecurity, and endangered the livelihoods of millions.

Compounding these challenges, political instability has continued to plague the country. Violence and interethnic conflicts have flared within different regions, while in parts of Western Oromia the government has been battling a violent insurgency. Then in early November 2020, conflict broke out in the country’s northern Tigray region, with the PM’s federal forces fighting regional forces and their allied militias. The conflict has led to widespread chaos, thousands of deaths and refugees, and placed millions in need of urgent humanitarian support.

Notwithstanding Ethiopia’s commendable efforts to mitigate its effects, the pandemic has had a substantial impact on the country. In terms of the economy, there has been an increase in the price of basic foods, rising unemployment, reduced wages and household incomes, a slowdown in growth, and an increase in poverty. Many firms have been forced to cease operations, primarily due to significant reductions in demand and exceptionally low revenues. These developments threaten to derail the country’s progress on inclusive development and poverty reduction.

Furthermore, interruptions in schooling have led to lost learning opportunities and could have severe long-term repercussions, while disruptions in national health programs could set back the fight against various diseases, such as malaria and tuberculosis. Unfortunately, there has also been an increase in domestic violence and labor exploitation, as well as a resurgence of early and child marriage. Many women and girls who were laid off after COVID-19 struck have also been forced into the sex trade, exposing them to exploitation.

Finally, as some parts of the world begin to roll out vaccination programs, Ethiopia, as with many other low-income countries, is in danger of being left behind due to rising prices, strained supply lines, and lack of access.