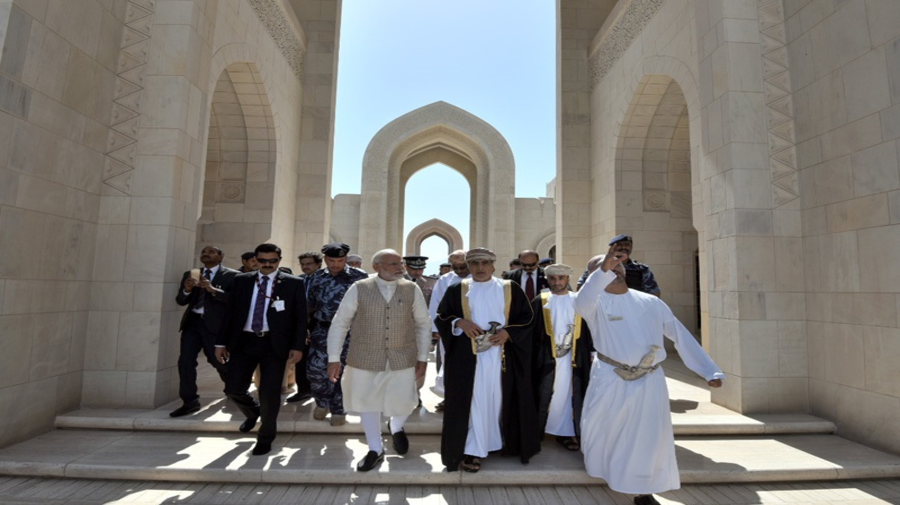 The Gulf States are at the centre of India’s ‘Look West Policy’ and form the core of the ‘Extended Neighbourhood Policy’ vision of Prime Minister Narendra Modi. The Gulf region sits at the strategic junction of India’s continental security and maritime security. The focused diplomatic outreach and exchange of high-level visits in recent years have spurred India’s stature as a power in the region. With increasing policy priority and sustained multilayered engagement, India has gained significant influence in the Gulf States and the syndrome is at a fast-paced trajectory.

The policy pursuit in the region was deepened with the dense visits of the Prime Minister. The growing pattern in these states to look up to India to further their own national interests have been manifested by their warm responses and return visit to India. All the visits have been used to express their shared concern and common interests and future visions. Our Prime Minister has been honoured by the highest civilian awards – ‘King Abdulaziz Sash Award in Saudi Arabia (April, 2016), King Hamad Order of the Renaissance, Bahrain (August 2019) and Order of Zayed, UAE’s highest civilian Award. Numerous developments like PM Modi’s visit to Motishwar Shiva Temple and Sultan Qaboos Grand Mosque in Oman and unveiling replica of first Hindu temple in UAE and participation in foundation stone-laying ceremonyare a powerful manifestation of India’s growing stature in the region.

The frequency of outreach and the high-level visits from the Gulf States followed by ‘Joint Declarations’, Strategic Partnership Agreement, Joint Commissions and Working Groups in different sectors are deepening economic engagement and facilitate India to be a paramount force of prosperity and stability in the region. The GCC has already been the largest trading partner of India and the economic mutuality is on the ascending mode. Major oil companies of the region, ARAMCO (Saudi Arabia) and ANDOC (UAE) are developing a strategic partnership with the Indian companies both in the public and private sector. The pattern of economic interdependence has gained a substantial boost with the presence of Prime Minister Modi in the ‘Davos in the Desert’ event. The economic diversification drive in the Gulf States is in sync with India’s vision of a five trillion economy and mutually beneficial and reinforcing. Saudi Arabia is set to invest $100 billion in India in the areas of energy, refining, petrochemicals, infrastructure, agriculture, minerals and mining, etc. Saudi Arabia’s sovereign fund has decided recently to invest $1.5 billion in the Jio platform of Reliance Industries. The UAE-India trade volume has almost doubled in five years. There is an atmosphere of trust and synergy in the multiple areas of cooperation between India and the region. The nine million strong Indian diaspora is the robust economic bridge between India and the Gulf States.

Support of Gulf States for India in OIC

The most perceptible manifestation of India’s influence in the Gulf States is their changing approach and support for India in Organization of Islamic Conference (OIC). The invitation to India in the Golden Jubilee year of the OIC and participation of the then External Affairs Minister of India, Smt. Sushma Swaraj as “Guest of Honour” in Abu Dhabi to address the inaugural plenary session of the organization is the telling testimony of India’s rising influence in the region despite fierce opposition of Pakistan. This marks the recognition of India’s significance in the emerging geopolitical realignment in the region and the enhanced standing of India at the global stage. Now the Gulf States view India as a large economy, energy market and reliable power in the neighbourhood in the wake of changing geopolitical landscape. The growing convergences between India and the Gulf States have been outplaying Pakistani bid to make OIC condemn India on the issue of Jammu and Kashmir.

The pandemic outreach and diplomacy and ‘Vade Bharat Mission’, the largest repatriation exercise of the world has proved the Indian commitment and leadership capabilities as a pandemic responder in the world and the Gulf region in particular with the largest concentration of Indians. India displayed its credibility as a partner by providing necessary humanitarian assistance and deployment of medical teams so as to ensure the early capability to stand to the challenge. India has received very favourable attention from the leaders in the Gulf. PM Narendra Modi has taken steps in this regard and talked to every head of state in the region and give assurance of cooperative regional response to face the crisis. The creation of ‘Joint Operation Room’ on the pattern of Indian initiative in SAARC for regional response is a sign of the recognition of Indian leadership vision.

The appointment of the Indian Liaison Officer in the US Naval Forces Central Command (VAVCENT) in Bahrain has spurred the Indian position in the security perceptions of the Gulf States. India’s Security and Growth for All in the Region (SAGAR) Doctrine and the Indo-Pacific Ocean Initiative (IPOI) are multilateral platforms towards its vision and policy of Free and Open Indo-Pacific(FOIP), blue economy, maritime connectivity, maritime security and shared capacity building. The Gulf and its security is an important component of India’s Indo-pacific security vision and pursuits.

Joint Exercises between India and the Gulf States have made the increasing Indian presence in the region as pillar and pivot of security in the region. India has been consistent in joint exercises of all the three services with Oman-Al Nagah (Army), Naseem Bahr (Navy), Exercise Eastern Bridge (Air) and with UAE, Gulf Star1(Navy) and Desert Eagle ( IAF & UAE AF) and Mission based Deployment for Operation GULFDEP. These are the incremental syndrome of Indian influence in the region.

The recent months have been marked by high level outreach and engagements. External Affairs Ministers (EAM), S Jaishankar visited Bahrain and UAE on 24th-26th November, 2020 that has surely boosted the vision of ‘Look West’ where he discussed with the leaders of Bahrain and UAE about issues of mutual interests, strategy to manage the pandemic and post-pandemic return of Indians. The minister remarked in an interview that the Abraham Accord will help grow the UAE’s position as a logistic hub for the rest of Asian economies, benefiting India as well. Indian Army Chief Gen. Naravane also made a visit to UAE and Saudi Arabia in December 2020 and held talks on enhancement and strengthening of our strategic partnership in regional issues, security and a shared vision for the future. The visit reflects the growing ties and cooperation in the arena of defence and security.

During EAM S Jaishankar’s visit to Qatar on 27th-28th December, he met all the top leaders in the country and discussed ways with his Qatari counterpart, H.E. Sheikh Mohammad bin Abdulrahman bin Jassim Al Thani to strengthen our multifaceted bilateral cooperation in the areas of energy, trade, investment, education, health care, defence and security. The upcoming first ‘Joint Commission’ meeting is due in 2021 is sure to boost our mutual regional interests and multilateral vision reinforcing India’s importance for the region. In brief, India’s influence in the Gulf States are in the desired ascending mode in consonance with India’s national interests and changing geopolitical landscape in the region and emerging world order.