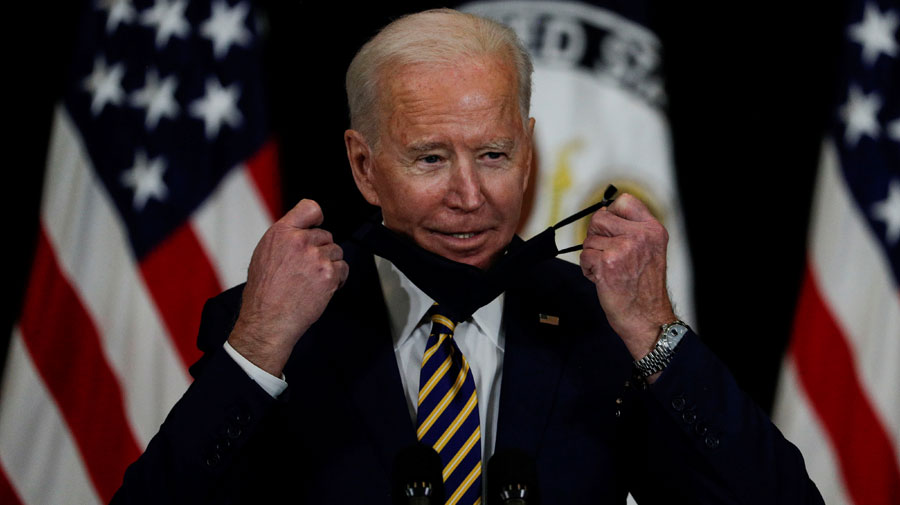 At the very outset, he spoke of repairing alliances and engaging with the world once again. He pointedly stated that American leadership is faced with advancing authoritarianism especially the “growing ambitions of China to rival the United States and the determination of Russia to damage and disrupt our democracy.”

There was little that was surprising in his speech. As expected from the Democratic President, terms like ‘democracy’ ‘American Values’ ‘freedom’ figured heavily in his address. The desire to restore America’s moral authority was clearly reflected in the tenor of the speech which reiterated themes of ‘democratic values,’ ‘upholding universal rights,’ and‘respecting the rule of law.’

In terms of global issues, at the outset, he addressed the military coup in Burma. Yes, he pointedly called the country Burma, because U.S. has never recognized the name Myanmar arguing that it was made without the consent of the people and was thus illegitimate. Interestingly, in 2016 soon after her party took office Aung San Suu Kyi had stated her preference for the colonial-era term Burma. Biden said that the Burmese military should relinquish the power they have seized.

After affirming America’s need for “engaging our adversaries and our competitors diplomatically” he made several references to Russia and directly stated that the“politically motivated jailing of Alexei Navalny and the Russian efforts to suppress freedom of expression” are a matter of deep concern to the United States, demanding his unconditional release. He also called out Russia for interfering with American elections.Nonetheless, in a clear sign of progress, acting fast, Biden has agreed to extend the 2010 New START (Strategic Arms Reduction Treaty) which expires on Feb 5, for five years, something that the Trump administration had been vacillating over. Talks between the Trump administration and Moscow had stalled since October 2020. The treaty’s lapse which would have ended all restraints on deployments of U.S. and Russian strategic nuclear warheads and the missiles, bombers and submarines that carry them, could have fueled a new nuclear arms race.

On China, which was probably most-awaited, he began by referring to it as America’s most serious competitor. In what was the most capricious policy stance he made two statements that were at complete deviance with each other – “We’ll confront China’s economic abuses; counter its aggressive, coercive action; to push back on China’s attack on human rights, intellectual property, and global governance” immediately followed by,“but we are ready to work with Beijing when it’s in America’s interest to do so.”

As Vice President, in the Obama administration Biden has witnessed China make promises and just as easily backtrack from them. Former President Trump had made posturing and challenging Chinaa cornerstone of his “America First” foreign policy. Biden’s team has promised a complex recipe of cooperation, competition and confrontation. How that will be served of course remains to be seen. However, Biden’s statement has in fact confirmed what was being speculated throughout the U.S. electioneering process – that the Democratic team’s China policy was likely to be one of appeasement without any direct challenge to increasing Chinese authoritarianism.

Biden’s speech also made clear that alliances with Europe are back at the heart of American foreign policy. He repeatedly stressed more cooperation with American alliance partners.

There were no references to Afghanistan or of troop withdrawals from there. On the other hand, he announced that there would be no troop withdrawals from Germany which hosts the largest portion of US troops in Europe — roughly 38,600, though the numbers vary as troops are regularly rotated to other countries.This is a clearrebuff to the Trump administration’s decision ofreducing American troops stationed in Germany, which he faulted for failing to meet its NATO spending obligations and accused it of treating the US “unfairly” on trade.With several references to the Middle East, Biden made clear that ending the war in Yemen would be a key diplomatic priority for his administration.

In what were predictable moves the Biden administration has already rejoined the Paris Agreement on climate, from which the Trump administration had withdrawn. Biden has also announced the intention to reengage with the World Health Organization (WHO) after Trump initiated the process to withdraw.In a clear endorsement of the importance of cybersecurityin today’s inter-connected world, the President has appointed the first national — Deputy National Security Advisor for Cyber and Emerging Technology, elevating status of cyber issues.

In a recent survey of American adults less than half of the respondents held an unfavorable opinion of Democratic President Joe Biden, with 11 percent having a somewhat unfavorable and 33 percent a very unfavorable opinion. This is compared to 49 percent of respondents who had either a very favorable or somewhat favorable opinion of the President.He,therefore, oversees a deeply divided nation. A large section of the American people are bitterly unhappy over the failures of the political and economic processes at home, and pessimistic about the future. For the new President, the challenge of restoring the national consensus will commence with implementing a more moralistic foreign policy before more contentious domestic issues are tackled. The fact that one of his initial speech has addressed foreign policy, indicates in his words that, “There’s no longer a bright line between foreign and domestic policy.”

Tenors of the Speech:

Biden has spoken about reclaiming America’s moral authority. This is not very reassuring for India. It implies that despite the strategic bonding that India enjoys with the U.S. at the present, the Modi government should expect to be called out on contentious issues, or regressive policy decisions. A new liberal internationalism with interjections in matters of human rights, actions in Kashmir, the National Register of Citizens (NRC) and the Citizenship Amendment Act (CAA), might become the norm, and the Indian governmentwill have to respond without letting them constrain the bilateral relations. On the bright side, this implies that Chinatoo may be called out on its human rights record not just in Xingjiang but in Tibet as well. During the Trump era, India became a vital factor for the U.S., in its confrontation with China. But this may change in the Biden era with the likelihood of compromise with China on some issues which may limit India’s gambit. Biden has placed climate change on the national agenda and sounded his intention to “up the ante” on major emitters. This may not bode well for India as any violation of climate change protocols will be considered a national security issue.

Joe Biden’s speech while being predictable on several counts especially on China and Russia, reticent on others such as Iran and Afghanistan, sounded the right tenor on rights of women and girls, LGBTQ individuals, the people of every ethnic background and religion, with promises of investing in the economic development of other countries. He has not sounded a positive alternative vision for American foreign relations, merely a relatively moralistic one, compared to that of the previous administration.Biden’s speech is a tacit accession of Henry Kissinger’s 1993 assertion that ‘America now finds herself in a world which she cannot dominate, but from which she also cannot simply withdraw.’