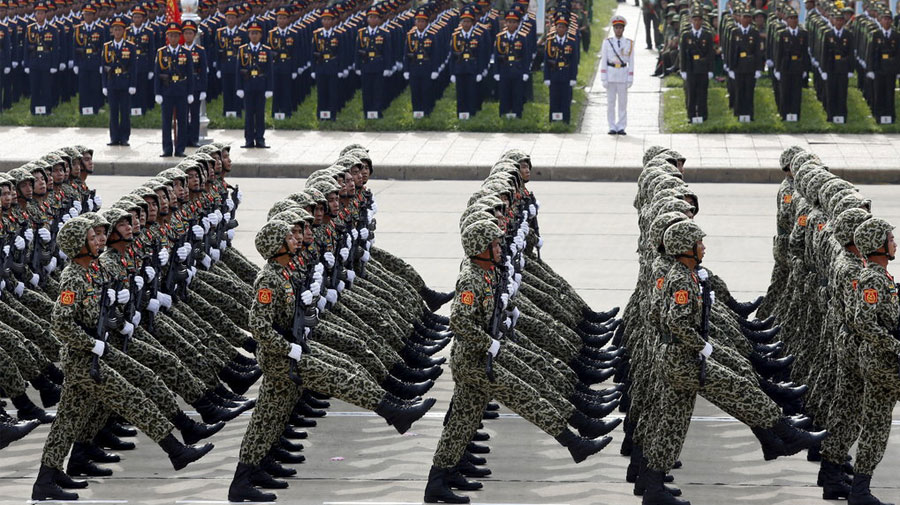 India and Vietnam are steadfastly dedicated to nurturing a warranted friendship in the realm of bilateral Asian military affairs. The two countries have strongly enhanced bilateral ties in recent years and are on the road to creating one of Asia’s most underrated and crucial friendship-partnerships from having been consistently underutilised.

Military diplomacy between India and Vietnam has assumed primacy in the strategic arena.It is increasingly becomingameansfor countries on the hunt for defence partnerships in Asia – a facet of the evolving ‘great game’ in the strategic confines of South and Southeast Asia and within the overarching geography of the Indo-Pacific region. Military diplomacy also helps firm up relations in the generic context of long-term international relations between India and Vietnam.

The escalating hegemony of the Peoples’ Republic of China is a common thread that binds Indian and Vietnamese strategic interests in their respective neighbourhoods. This article delves into some of the key considerations afforded by India to its military diplomacy with Vietnam and charts a course for further interaction in the domain.

The headline sortie between India and Vietnam is the elevated Comprehensive Strategic Partnership between the two rising powers with considerable influence in the Asian security edifice.India has envisaged and established such a partnership with only one other nation in the Southeast of Asia i.e. Indonesia. The factors that highlight the India-Vietnam bonhomie are largely centred around the geopolitical and security challenges posed by China.These include sustained cooperation at the Track-I level and the drawing up of sustainable paradigms in cooperation, broad military exchanges that upscale defence diplomacy, and a focus on the high seas to improve and improvise upon ongoing defence activities and undertake newer ones.

Notably, India assisted Vietnam with the restoration and revampof its Peoples’ Air Force fleet of MiG-21 fighter aircraft– a fleet that Vietnam abandoned in 2010. In May of this year, India announced that it plans to make the country a hub for maintenance, repair, and overhaul (MRO), with Vietnam considered to be a potential client for the long term.  Training agreements have also been signed to encourage the exchange of know-how on matters military with Vietnam.Moreover, cooperation in defence may also extend to the joint oil and gas exploration programs in the South China Sea which may be at the centre of potential conflicts and escalations.

As far as trade of defence equipment is concerned, India has reportedly offered Vietnam the indigenous surface-to-air Akash missiles and the Russo-Indian BRAHMOScruise missile as part of the 2.0 strategic partnership, while such reports have also been denied. That being said, military trade between India and Vietnam remains on the anvil owing to the convergent security imperatives leading to results-oriented diplomacy.

While India and Vietnam continue to forge strong military ties, it is worth suggesting that they are presently betraying the impression of a capable duo that may yet swing the stakes decisively against China in the Southeast Asian military milieu. A middle-ground for India and Vietnam in the South China Sea disputes is yet to be ascertained as the former is committed to non-interference in the age-old territorial disputes, while the latter remains a central, uncompromising party to the disputes.

To improve its military diplomacy with Vietnam, India must consider the evolution of preliminary military diplomacy in the form of financial creditpackages and annually-organised meetings into a formal, well-defined,military-focussed arrangement that accords extraordinary priority to China. This could be ingrained in the Comprehensive Strategic Partnership or be a stand-alone one owing to the failures of India-Vietnam defence cooperation. The Comprehensive Strategic Partnership with Vietnam must also emphasize India’s improved indigenousprowess vis-à-vis other Vietnamese partners in Asia such as Russia.

Military modernisation encompasses wide-ranging facets such as the shrewd and timely acquisition and induction of state-of-the-art security equipment, military indigenisation and technologization over distinct phases, friendly exchanges and military training of personnel, and the gradual reform in military structures to dismantle archaisms. It must be given a major fillip when concerning India and Vietnam, especially going into the decade of 2021-2030.

In 2011, India affirmed its commitment to assist Vietnam with military modernization.2014 set the agenda for military trade with a $100 million credit line having been extended to Vietnam. 2016 witnessed India’s extension of amulti-million-dollar credit routeto Vietnam.In 2018, India extended a second$500 million credit handout to Vietnam (which didn’t materialise) primarily to enhance its military diplomacy with the present ASEAN Chair, taking the extensions of financial support to Vietnam to over a billion dollars. Previously, extensions of lines of credit to Vietnam by India have involved other areas such as developmental projects. With the above in place, India asserted that it is all but Acting East as regards its sacrosanct Asian partners like Vietnam.

Just recently in November, India re-affirmed this longstanding commitment by assuring Vietnam of guaranteed access to high-end Indian military equipment should Vietnam desire so and that that is borne out of India’s indigenisation initiatives back home, a worthwhile history of India-Vietnam defence cooperation, and accessibility to joint hydrography missions.An implementation agreement for the latter was signed recently, too. India is largely beginning to view Vietnam as one of the foremost and lucrative destinations for its arms exports.

In the multilateral domain, which forms a core aspect of military diplomacy as it ascertains the utility of cooperative platforms that ensure intensive discussions and detailed ponderings, India and Vietnam are engaged in annual meetings at the Track-I level. The 17th Joint Commission between India and Vietnam – a form of bilateral diplomacy –was concluded recently in end-August, during the ongoing COVID19 epidemic, and agreed to amplify the provisions for defence cooperation.

Vietnam professes to critical stakes in the South China Sea’s maritime environment, with several historical claims to islands such as the Spratly’s archipelago and theParacels.With the present government of India all but dedicated to wooing countries sited against China in the sphere of ever more volatile international affairs, Vietnam offers an attractive proposition both because of itsfavourablegeographical location and anincreasingly assertive standing of its own against the Chinese.

In summary, it can only be ascertained that India and Vietnam are headed in a presumablyreasonable direction with a pragmaticand relentless approach tomilitary diplomacy at the core of an enduring affiliation garnering a diverse set of priorities. However, judicious parlays and short-sighted policies are often characterised by negligible results, and this is fairly evident in the present state of India-Vietnam defence cooperation. The South China Sea and Indian Ocean regions can effectively only be secure with healthy India-Vietnam defence diplomacy and ensuing mutual proclivities.

Jay Maniyar
The author is a Research Associate at the National Maritime Foundation in New Delhi, India. The views expressed above are in a personal capacity, and do not reflect the views of his employers. He can be reached via email at jaymaniyar@gmail.com, and can be contacted on the professional networking platform, LinkedIn.
Tags:
India Vietnam South China Sea Southeast Asia South Asia Indian Ocean Region Economic Cooperation Military Diplomacy Military Trade Strategic Partnership
Share:
Share this...