America Faces the Worst Crisis at Home: Democracy Invasion by the Republican Trump 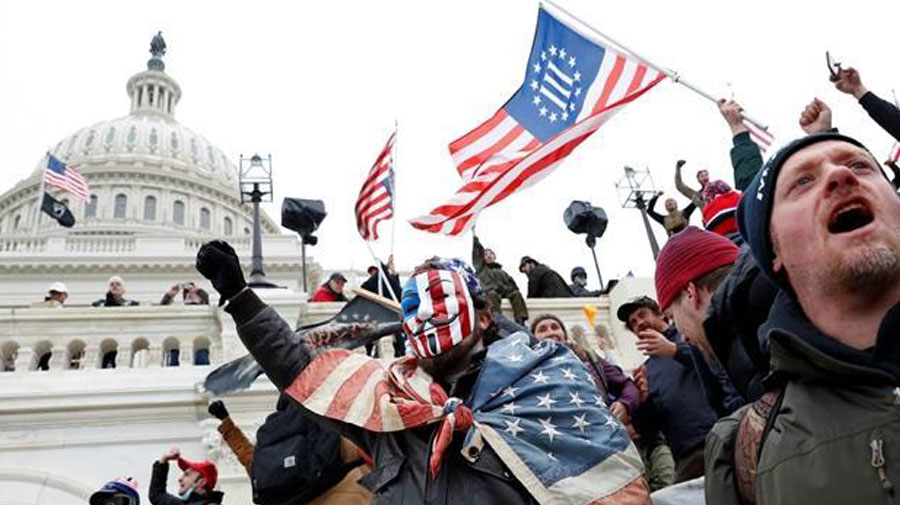 Today’s America, as it seems from the furious attack on Capitol Building when the US Congress was in session to certify the outcome of the recent Presidential election, is not the alter ego of the radical republican spirit that gave birth to the strongest democracy of the world way back in 1776. The New Year Wednesday, 2021, will therefore be marked as a black day in a highly developed, largest democratic country like the United States. In today’s world, standing in a liberal-democratic and progressive country like America, no one could have imagined that such a scandalous event of attack could happen in a Legislative Body. The need for an analysis of the eventuality of such a final body-force was never imagined in a democratic ambience of the said country. With this incident of attack, the security system of advanced countries like the USA is also being questioned. The country is considered as the biggest model by the world as the cradle of democracy and simultaneously the world follows in its footsteps America as a model; but under the present situation, did that country give a thundering signal today? Therefore, we have a special need to investigate this in-depth. In the opinion of Joe Biden himself, ‘this is an axe to the fortress of democracy. Such an event has never happened in the history of America.’ Although the Administrative Building has been attacked before, such attacks are unprecedented in the President’s (who is legally vanquished) persuasion.

“The chief significance of revolutionary constitutionalism”, writes Kelly, Harbison and Belz, “was to create limited governments that would safeguard individual liberty, and property as well as promote the common good.” But today we are witnessing a reversal of the spirit of an enlightened republican nation that America stood for and its revolutionary leaders had committed. The way the demonstrators tried to trample the legacy is a matter of far deep significance and soul-searching not only for America but for all liberal democracies in the West and in Asia for it actually puts a question to the legitimacy of the constitutional principles to seek peaceful changes based on reason and natural rights of people that inter alia includes the fair procedure, representation of people, the right of resistance to arbitrary rule and oppression.

It seems to signify that the current rumblings are of far potent nature, indicating a shift of the system that has derogated and diverted much from its original position. Here two points come to mind. One is obviously that in course of time the executive branch has become so supercilious that practically the foundational tenets to defend liberty and people’s mandate are the greatest casualty at the altar of the executive power. This point is very important because whenever we talk about American constitutionalism we talk about separation of power and checks and balance so that the system could smoothly run on the basis of co-ordination and authority derived from and restrained by the supreme concepts of peoples’ rights and sovereignty. That it has not fully materialised is, of course, a painful inadequacy diminishing the democratic credential of the system. Yet American constitutionalism is such a fine product of intellectual moderation and historical experience, despite orthodoxy, that even within the framework of separation of power, legislative supremacy of Congress cannot overshadow the governmental functioning.

So, is it this aspect of a “Leviathan in chains” that paves the way for somewhat dominant Presidency or out of extra-constitutional forces in vogue that makes it authoritarian and peremptory, needs to be considered. It is because disagreement on public policy based on the reasoned debate on merits and demerits of such policies is one thing. But inciting division in a society which is open, plural in nature, accommodating different interest groups who contend for a share of power, is a different thing altogether. It is risky because it can spread a political conflagration in a society which is no doubt materially rich but at the same time, there is no denying the fact that a large section of people including black Americans bearing the brunt of the odious practice of racial discrimination and indigenous people do not endorse the new political order that was crafted and remains highly polarised. So even today the factional nature of American politics lingers, adding the risk of discontent and election manipulation that unless the fault lines of democracy are not mended, it might widen the internal fissures to foment instability to overwhelm the system.

This point is particularly important given rampant allegations by the critics that for a variety of reasons, the outgoing Trump administration has not had much success at home and abroad. On the contrary, it has been criticized on various counts despite its popularity owing to some controversial decisions. In addition to being in executive power for a term, some anti-incumbency factors have worked out. All in all, Donald Trump virtually lost the Presidential election to the newcomer Biden who promised to work for the national interest with a universal vision. This is the root cause of all these attacks on prevalent democratic values in the US. Trump along with his supporters could not accept this defeat at all. He made various fabricated allegations at various times that he did not want to accept the results of this election. This time, finding no alternative and seeing no further change in the declared election result, he angered his supporters to make this illegal, undemocratic, reckless and arrogant movement. President Trump himself shouted from his residence that ‘We cannot lose the election.  I have calculated in various ways that the result of this vote is a big deception. Together we will go to the Capitol. I will not give up.’ Even he did not stop here to provoke his supporters. ‘If we want to get our country back, we have to go to the Capitol and behave strongly. If it is weak, it will not work.’ But after all these accidents, finally, Donald Trump has to say goodbye. Joe Biden was given a certificate of victory by the two Houses of America (Senate and House of Representatives).

Secondly, the recent attack on the Capitol building, it seems, is not even the question of any individual, say Trump throwing gauntlets to the system although such premonition cannot obviously be set aside. Rather what is more important is to see how the partisan interests in the American political system, linked to its two dominant parties, wreak havoc by putting question blatantly to the mandate of the people, the very justification on which it prides itself, thrived much and has not even dithered to invade the far-flung non-Western world from Afghanistan to Libya. In fact, the point to be noted is that the root cause of the trouble lies in the contestation for the highest seat which symbolizes the American state which requires overwhelming consensus among the electorate to back such a stalwart demagogue over and above any political ideology. But it is doubtful how many Americans voted in the Presidential election purely from that dispassionate standpoint. Rather, the attack under review raises the doubt that takes us back to the Hamiltonian predicament that popular vote might not be the most preferred or the wisest way for choosing representatives. But such an argument can be countered with the critique that if you don’t believe in democracy because it is imperfect then why you are so desperate and dissatisfied as to obstruct the opposition candidate and want to put yourself in power. This shows that popular elections are a proven means to establish legitimate government and “to choose or peacefully dismiss representatives”. That is why disrespect to election results is tantamount to a coup which is self-defeating because one’s defeat does not signify that the election was fraudulent especially in high-voltage media covered election and monitoring during counting. Rather, it is understood that even today in the 21st century the greed for political power makes people (maybe a common man or highest executive like the President) do irrational, undemocratic, illegal, immoral, and dictatorial things. President Trump’s acts amply signal such hidden danger to be taken guard of.

So what is happening in America is not only shocking but also a mockery of revolutionary principles with the effect of encouraging anti-democratic propensities in its clash with the democratic legacy creating a deceptive picture that the protesters are upholding the genuine voice while in effect trying to monopolise power and justifying their act of disapproval and subversion. However, it might be too early to speculate any radical turnaround in the system. But the mood of rejection of popular mandate in a fiercely contested Presidential election is definitely a step short of a political groundswell to disrupt the struggle to achieve the constitutional ideals. If it can happen or the stage of conspiracy can be masterminded by some political leaders even after 245 years of American independence, must we introspect about the laxity of the system having taken for granted or about its health and sustenance that something goes wrong, yet remains unaddressed. Such a line of thought exercise impels us to appreciate that reason and liberty, not the mobocracy that was the bedrock of the American constitution.

We know that in America political participation and suffrage are the hallmarks of individual liberty but the idea that runs deep even within republicanism is the common good. As “the Declaration of independence meant public happiness in which individuals devoted themselves to the commonwealth rather than narrow personal ends.” Seen from this perspective Lockean liberalism serves as the lifeblood of American politics and society and that sublimates itself in the broader expression of civic virtue and a level playing field to enable the system to reflect the “will of the people”, a temperament that gets severely jolted with the attack on Congress in session. Nevertheless, it’s our benign hope that a more resilient America would soon emerge out of such unprecedented chaos because it is an acid test to prove its mettle over and above any provocation particularly when the turmoil unleashed by the pro-Trump mob has provided succour to authoritarian regimes in Russia and China.