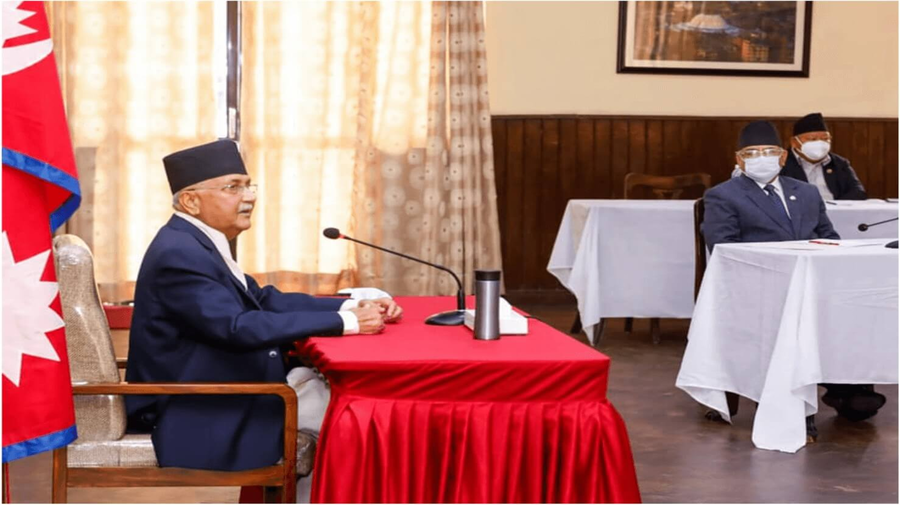 Politicians and practitioners know better about ground reality than citizens or the people about Nepal’s politico-systemic constraints, deficiencies, and defaults. Can then our eternal spirit of Nepal survive, thrive and strive for the better, not the worst. Politics of progress, just society and our Nepali “soft power” virtues would uplift indubitably from the current morass. Admitting it would be hypocrisy if my critical appraisal does not change me to make a difference. It applies to a plethora of criticisms percolating in our political habitat. Our political journey as a citizen and leader is continuing to find our right destination, even if we are lost somewhere in the meantime.

We witness a constitutional predicament in this current political spat in Nepal. Whether the justice – political is delivered keeping in the evidence of the Chief Executive in dissolving the Parliament. There are confusions when the dissolution of the Parliament means either the Bicameral House or the Lower House (House of Representatives). I think our political mnemonic is poor in the terms and conditions of constitutional provisions, constitutionalism, and norms and values of the rule of law. Since there are relatively few political scientists groomed in the country in the new generation when the discipline has no appeal or less charm compared to other profiteering subjects and lucrative careers.

But the interests and indulgence in politics are so qui vive and always the talk of the town, that the art and science of politics is hardly mastered or well versed in. It is a garrulous culture habituating that is not based on the faculty of valid reasoning or in a higher plane of cerebral exercise to transcend the state of being and the current state of affairs. Thus, we are being nurtured in this manner that is under-developing the local schooling of government, public policy, and political science.

I just want to mention again, economics influences politics in the contemporary world. When economic prosperity is not within our reach, then the ramifications are seen in everyday politics. Democracy survives when there is a modicum of economic amenities so that citizens are entitled to freedom from fear and freedom from want. As a bonafide citizen and denizens find conducive economic potentials, opportunities and prospects than can a healthy, sound, and robust human capital so that it ensures social capital, a civil contract, and political contract of and in a democracy.

First, let me delve briefly into the political economy that determines unfolding politics. Conservatism’s political perspective has to arrest the changing contours of the economics of international relations. There is a development edict that also provides a ballast to liberal democracy and its durability. To the point of the point on political economy and development praxis, practitioners in Nepal know the verbosity about development pomposity. Nepal’s Economic Development Paradigm is less explored and discussed.

Either Mixed Economy or Socialist Pattern of Policies or Liberal Policy, Nepal needs seriously to begin its own local indigenous economic development approaches. Or we pry over India because of the proximity to the Indian State and Society from multiple dimensions. India has a particular model now very much in discourse – the West Bengal (cultural evangelism and knowledge capital), the Kerala (Human Development), and the Gujarat (Commercial and Trade Development) Model of Development.

Likewise, there is a Chinese model or some other model which Nepal’s Communist government could have some inclinations on or penchant upon. They could be thinking of the Dengist Model while liberal democrats think of the Singapore story or the East Asian modeling.

Nepal can learn lessons from our planned development and economic prosperity approaches. While we were adopting some of those approaches to tackle the pressures of the Western paradigms given, our social contexts are like India than Tibet, China. Nepal can mull over a combination of Kerala, West Bengal, and Gujarat Model of Development as a layperson’s surface information. So that MDGs and SDGs would be easier to achieve.

There are political debates every day but less so on a genuine or indigenous economic paradigm or economic modeling. But it is not unworthy to rethink India’s model of development as similar to a similar state of affairs—political, social, economic, cultural, etc. on the economic framework to act upon. A serious discourse on Nepal’s economy is urgent now more than ever because of the influences of globalization, liberalization and privatization, and the capitalizing society of Nepal. Development discourse is unending, but the politics of prosperity depends on delivery, not diction.

How do we diagnose the specific economic system of Nepal? It provides political-economic prescriptions by every government of the day that is their raj dharma either of the Left, the Center, or the Right in the arc of democracy. In a plural and diverse society of the state of Nepal, one can talk of the multi-structural economy of Nepal. A heterogeneous discipline of classical economics seeks multiple and intersectional approaches to the political economy, and Nepal cannot be immune from this phenomenon.

We can appreciate the unbiased and objective assessment of economists whose praxis is vis-à-vis global economic thinking applications. Household economics determines public economics and vice versa. Political economic isms have ideas. But how viable or pragmatic depends on its internalization. One size fits all solutions are uneasy to find consolidation given deliberative democracy, promises and pitfalls of electioneering aspirations, and constraints of political-economic heritage or terrible legacy of public policies. Features or nomenclatures remain different in the polity, but the essence remains unchanged.

Nepal has its peculiarity, specifics and relativism, and there is no universal blueprint of economic development. Despite structural constraints and trying circumstances, we can achieve higher and excel further by focusing and refocusing on our strength in existing public policy on political economy. Complacency is bad, and it is important to normalize the routine state of affairs and deliver all those promises kept and a tall noble mission of the government and governance.

Right pitching in the political battlefield has good punches of a synergy of inclusive nationalism, pluralist democracy, and welfare liberalism that refines unfolding current political history. There is an impetus in political education, political communication, and political mobilization when the Thermidor under heaven is building pressures like a tipping or boiling point. It would be politically creative to out win the future electoral contests when the political socialization understands the past, interprets and acts in the present, and imagines and builds the future. An important component of political society is to groom leaders in new generations and seriously rethink to save the party politics and its existential importance as action-oriented liberal democrats and patriots.

Conservatism can survive if it gives the historical mode a changing tone and dynamic overtones in performance and delivery to avoid ruptures, disruptions, and eruptions in the political trajectory. Strategic intent and delivery can ensure the syncretism of liberal realism—liberal democracy and liberal nationalism. Otherwise, grappling political tumult and turbulences are jolting both commoners and leaders too. No one is immune from the political vices if not corrected from now onwards that has fallouts in every sphere of national life-threatening even the neighborly bilateral relations and inviting challenges and threats to our foreign policy contemplation and contemporary ideology.

On the one hand, Nepal’s teeming Foreign Policy analysts calculate the case of geopolitical fallouts on domestic politics. Any statesman would navigate the internal politics and deftly manage external affairs. The utmost choice is pragmatism, which evinces neither posture of disinterest nor overture of neutrality. If we just knock on heaven’s door, the real Himalayan state of Nepal, the mandate is to mediate it with worldly affairs.

(This is the second sequel to the article “Pathways in Nepal Politics”. The first part was published on 4th January 2021)