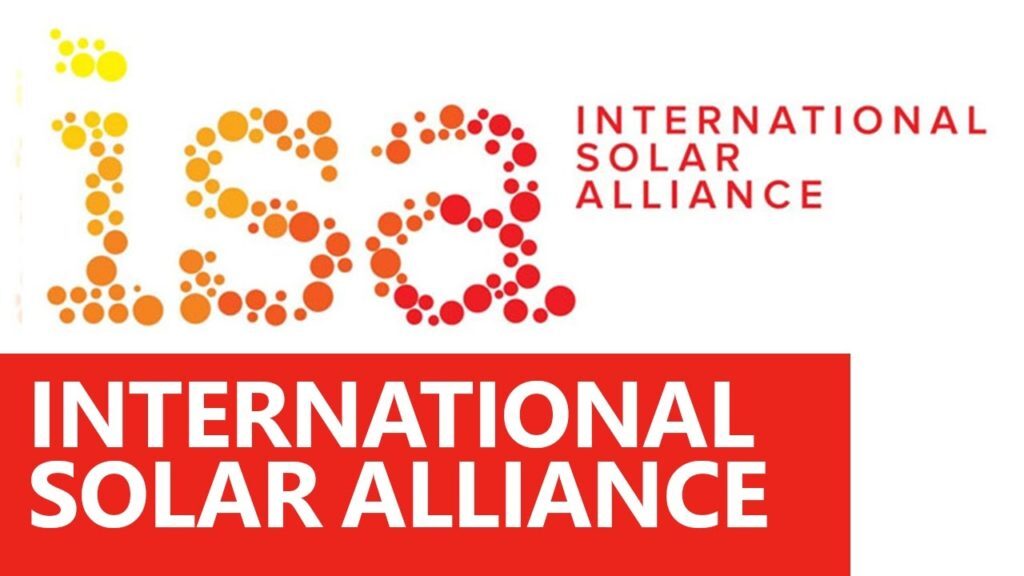 Recently, India welcomed the CLMV countries (Cambodia, Laos, Myanmar and Vietnam) to join the International Solar Alliance (ISA) as well as the Resilient Supply Chain Initiative by India, the Confederation of Indian Industries (CII) as per the statement of the Minister of State for External Affairs, Government of India (GOI). The ISA is an alliance of 121 nations launched by India, most of them being sunshine nations that lie either wholly or partially between the ‘Tropic of Cancer’ and the ‘Tropic of Capricorn’. In COP 25 held in 2019, India called for more expeditious development of the ISA. The purpose is to provide clean and low-cost solar power in solar-rich nations to make them self-reliant and energy secure. Indian Prime Minister NarendraModi announced that ISA was India’s “gift to the world” in the battle against climate change.  In the United Nations (U.N) climate meeting at Poland in 2018, the European Union (EU) and India led ISA acknowledged a collective declaration, that climate change activists say could support India reach its renewable energy aim by 2022.

ISA is the first treaty-based international government organization headquartered in India and is being seen as a foreign policy instrument. In October 2020, India and France were re-elected as president and co-president of the ISA for a span of two years. ISA is an alternative source of energy both at the international and domestic level and over the years it has become an influential stage for evenhanded generation and dissemination of energy resources. It has been an action-oriented platform for increased disposition of solar energy technologies to heighten sustainable development and energy security to promote the path to energy in emerging or developing member nations. Recent reports suggest that the government is envisioning funding in a solar bank to support international solar development. The state-run Airports Authority of India (AAI) also plans to leverage airport contracts in ISA member nations by showcasing Cochin International Airport Ltd (CIAL) in Kerala, which is the first airport in the world to run fully on solar power. Likewise, India’s first solar-powered cruise boat, “Aditya” was rolled out in Kerala in 2019 for cleaner and cheaper transport which is a great step ahead.

ISA will also promote the “One Sun, One World and One Grid global” (OSOWOG) project once India carries out a comprehensive vision document for which work has commenced. The GOI has floated the idea of OSOWOG, which is an ambitious drive that places India alongside other major powers, and their super-grid plans. Solar energy as an imperative component of renewable energy has been getting recognition from scientists, policymakers, etc. as a substitute source due to its broader affordability and availability. For the nations placed between “Tropic of Cancer and Tropic of Capricorn,” it is critical to tap sunrays for the electricity generation to meet the local population demand and to raise the standard of living of the population to tap the resources for the enhancement of the society. The ISA has also partnered with World Bank to launch ‘Global Solar Atlas’ in an event at the World Future Energy Summit in Abu Dhabi. ‘Global Solar Atlas’ is a free online means that presents yearly average solar power potential at any place in the world and therefore recognizes possible places for solar power creation. India continues to remain committed to 275 GW of renewable energy by 2027 as it is also ramping up investments in coal, fossil fuels, gas and oil. This can reduce India’s energy dependency on the West Asian nations and save foreign exchange. As many nations are preparing to lessen the dependency on fossil fuels to meet the expanding energy demands, there is a necessity to expedite the alliance to tap solar energy to the maximum. The call of the hour is to draw solar energy largely.

Today, where many millions of households live without power in India, grid connections prove impossible and lead-acid batteries will almost, without doubt, be used. However, challenges do arise where solar power in rural India is stored in lead batteries and if they aren’t correctly recycled, contamination can cause health problems. The lead-acid batteries are a tried-and-true technology that costs less but requires regular maintenance and doesn’t last as long. Whereas, lithium batteries are a great choice for solar power systems but is more expensive compared to lead-acid batteries. India in this way should consider the ‘South-South partnership’ by tapping resources like lithium in Latin American nations (Argentina, Bolivia and Chile), which have one of the largest deposits of lithium that can be used for producing batteries for enhancing solar energy in India. For instance, the agreement between India and Bolivia demonstrates that trans-regional solar energy cooperation can flag the way for equability and a just energy order in the global platform.

The idea of an international solar grid with India acting as support is a step-change at a high sounding range. There is a need to build a regulatory, political and contractual setting that promotes the advancement of solar energy in India. The geopolitical weight of solar energy holds to the point that it can be generated at the local level at a minimal price, unlike conventional energy that needs to be extracted and transported to a country via sea tankers or pipeline. Though it is a little quick to assess the ISA’s accomplishments as an enabler of low-cost solar energy, it can also perform a requisite function in the advancement of sustainable cold supply chains for possible COVID-19 vaccines. The ISA can also mold the global expansion of a solar-powered vaccine logistics network to substitute the kerosene-based absorption refrigerators. India should likewise utilize ISA to drive for the development of low-cost sustainable cooling infrastructure.

In the post-COVID world, India through its rise in ‘Medicine diplomacy’ is attempting to establish itself as a responsible global leader. India is expected to achieve the target of 450 GW of renewable energy generation by 2030 and 175 GW before the deadline of 2022 as per the GOI. But, it is important for ISA to consider increasing its budget, as its yearly budget is $5-6 million, as compared to other organizations like The Organization of the Petroleum Exporting Countries (OPEC) and International Energy Agency (IEA) that have bigger budgets, decisive in producing data and analysis to become an instrumental international organization.  Solar energy is the future and grid management will be a deciding factor. Recently, Australia shared the Indian Prime Minister’s vision of ISA that can bring transformational advantages for all of humanity. ISA can mature as a novel age platform for a revitalized multilateral effort that would place it as an international organization and additionally connect India’s ties with other nations. As India is expected to gradually see energy consumption doubled over the long term, ISA is hoping to add new dynamism to ‘Energy diplomacy’ in the 21st century.

Preethi Amaresh
Author is a political scientist and an author of the books, "Nihonomics" and "Nanmin". She is pursuing her doctoral degree in International Relations from Geneva School of Diplomacy, Switzerland.
Tags:
Share:
Share this...