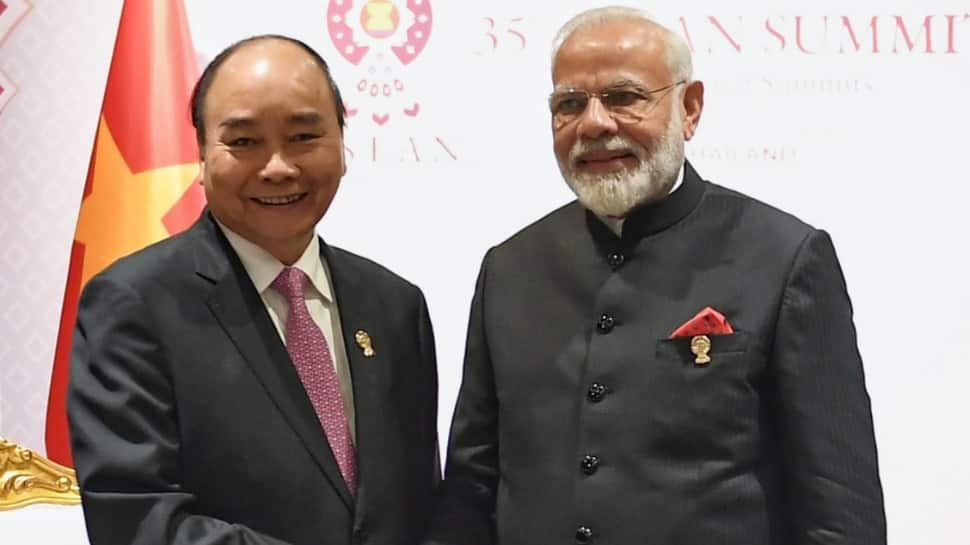 PM NarendraModi and PM Nguyen Xuan Phuc during India-Vietnam Virtual Summit on 21st December expanded the scope and scale of bilateral engagements by consolidating the positive trends in the bilateral relationship and thereafter by giving substantive shape and adding to the existing Comprehensive Strategic Partnership. The statement issued after their deliberations was aptly titled ‘India-Vietnam Joint Vision for Peace, Prosperity and People’.

Of utmost importance has been the question of peace and stability in the region so that security and prosperity can be obtained. Therefore, the PMs underlined the need for an open, inclusive and rule-based architecture in the region; they reiterated their commitment to work towards such an order. It was thus recognised that bilateral defence cooperation was an essential part of the Comprehensive Strategic Partnership and therefore further fillip to such cooperation was required as it will be ‘an important factor’ in contributing to stability in the Indo-Pacific region.

The inclusion of reference on the South China Sea in the Joint Communiqué supporting the freedom of navigation and overflights and adherence to the 1982 United Nations Convention on the Law of the Sea (UNCLOS) with emphasis on peaceful resolution of the disputes was obviously meant for China. Both the leaders also underscored the need for eschewing militarization activities and following international norms for the conduct of activities. As a reaction, Global Times on 22 December came out with an article criticising the assertions made by PM Modi that any agreement on Code of Conduct ‘should not undermine the legitimate interests of the other countries’. Global Times newspaper being a mouthpiece of Chinese administration, such an articulation reflects the fact that China is most likely working towards such a negative outcome for others.

Further, the conclusion of seven agreements ranging from defence industry cooperation, setting up of a Telecommunication University in NhaTrang, arrangements for cooperation in UN Peace Keeping Operations and cooperation in areas of nuclear and solar energy besides health security indicate the increasing substance and diverse nature of the bilateral engagement. A Plan of Action for implementing the Joint Vision for Peace, Prosperity and Peoples for the years 2021 to 2023 is also being devised to implement the consensus reached at the Summit. This plan replaces the earlier one of 2018 to 2020 thus pointing towards continuity and robustness of the relationship as also the practical shape that is being given to the Comprehensive Strategic Partnership.

Significance of India-Vietnam cooperation on the ASEAN platform for contribution to regional peace, prosperity and security was duly recognised. As both countries share a similar strategic outlook on emerging security and strategic architecture in the region especially, when one looks at the common strands of the ASEAN Outlook on Indo-Pacific (AOIP) and India’s Indo-Pacific Oceans Initiative (IPOI) the two sides pursuing the goals and objectives of AOIP and IPOI will expand their practical cooperation in areas of maritime security, maritime connectivity, maritime environment and other allied blue economy issues. In all these endeavours India is committed to maintaining the ASEAN centrality as its core. Additionally, it was jointly resolved to expand cooperation at the regional and global levels to include multilateral institutions like the ASEAN led mechanisms as well as Mekong sub-regional cooperation. As both countries are going to become non-permanent members of the UN Security Council for two years from January 2021 the two sides have decided to work towards making the UN more representative, promote reforms and multilateralism as against unilateralism being exhibited by some countries. Further, multilateral cooperation in dealing with the challenges of Covid-19 especially international cooperation in the development of a vaccine, training of health staff and streamlining of logistics and promotion of supply chains in coordination with multilateral bodies like WHO was very appropriately stressed.

Since India remains afflicted with various manifestations of terrorism especially cross-border terrorism both countries also decided to step up their coordination in this area. India has been making efforts at the UN for a long for the adoption of the Comprehensive Convention on International Terrorism (CCIT) but unfortunately, the UN member nations have not reached a consensus on it. Vietnam could be of considerable to India on obtaining such a consensus at the UN.

In so far as prosperity and growth are concerned both sides left the erstwhile bilateral target of 15 billion USD unchanged that is to be achieved at the earliest; no time span was indicated as both seem to have recognised the adverse impact of Covid-19 on the bilateral trade. According to the Ministry of Commerce & Industry of India, the figures of bilateral trade for half year 01 April to 30 September 2020 was 4.73 billion USD which compared to the full last year’s figures of 12.34 billion USD shows a contraction in trade. Evidently, this has been largely in consonance with similar trends elsewhere in the world due to the downturn in the economy and trade propelled by the ongoing coronavirus pandemic. Yet, both sides have sought to exploit opportunities offered by India’s objective of becoming a 5 trillion USD economy by 2024 and Vietnam’s plans of reaching the levels of a high-income economy by 2045.

Development partnership was further strengthened by raising the number of Quick Impact Projects being executed by India in Vietnam from five per year to ten per year from 2021 onwards. A number of MOUs were signed on the sidelines of the virtual summit for the strengthening of civlizational, cultural and people to people relations.

Overall, it can be easily surmised that the virtual summit between PM Modi and PM Nguyen Xuan Phuc was successful in giving a substantial and practical shape to the bilateral relationship especially so in an environment which is complex and difficult to navigate for achieving mutually beneficial outcomes. The summit also underlined the fact that both countries are committed to achieving peace and prosperity not only in the region but also at the global level.