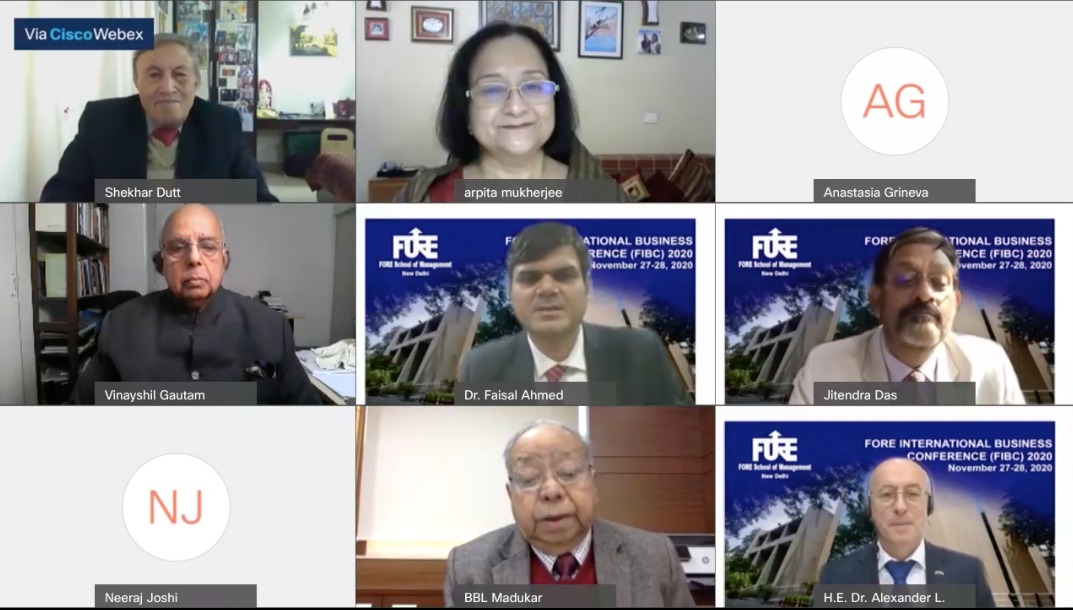 “India and Russia are connected with long-standing relations that are based on a firm foundation of long-term friendship and mutual sympathy of our nations”, said Dr. Alexander L. Rybas, Trade Commissioner of the Russian Federation to India. He was delivering the inaugural address as Chief Guest of the FORE International Business Conference (FIBC) 2020 on the “Future of Business in the New Global Realities” organized by FORE School of Management, New Delhi, India, on November 27-28, 2020 in virtual mode.

FIBC 2020 brought together eminent scholars and diplomats to deliberate on the new global realities, and to decipher a pragmatic roadmap relevant to global business and policy-making efforts. More than thirty research papers were presented in six technical sessions spread across the two days. The technical sessions included those on International Trade and WTO Issues; Technology, Strategy and the New Realities; International Finance and the Financial Systems; Global Marketing and Consumer Research; Cross-cultural Contexts and Organisational Studies; and, Geo-economics and the Geopolitical Architecture. Besides, there was a dedicated plenary session on Discourse on New Global Realities that examined the geopolitical discourse and strategic realities in the Indo-Pacific region. Also, there was another plenary session dedicated to Africa and titled as India-Africa Business Forum, which was organised under the aegis of FIBC 2020 by FORE School of Management in collaboration with The Diplomatist. The conference ended with a valedictory session.

In his inaugural address, Dr. Rybas, who also served as the State Secretary and Deputy Chairman of the Federal Environmental, Industrial and Nuclear Supervision Service (Rostechnadzor) in the Russian Federation, emphasised on India-Russia bilateral trade potential. He asserted that the long-term goal of the India-Russia trade relations is to achieve bilateral trade of $30 billion by 2025, coupled with a growth in mutual investment flows to at least $50 billion. He said that in order to achieve these goals, it is necessary to focus on updating the bilateral legal framework e.g. signing the free trade agreement between the Eurasian Economic Union and India. He emphasised that such integration efforts will help remove tariff barriers, reduce quantitative restrictions, simplify rules for import licensing and the use of anti-dumping measures, while also bringing Sanitary and Phytosanitary (SPS) measures in line with the World Trade Organisation (WTO) regulations. He emphasised that there is immense potential for cooperation between Russia and India and mentioned that in sectors such as information and communication technology, fin-tech, space exploration, environmental protection, engineering services, educational services, quantum technologies, and data security, such prospects are being actively discussed. Moreover, he also mentioned the growing interest of the Indian side in Arctic research.

The conference began with an opening remark by Dr. Faisal Ahmed, Conference Convenor, FIBC 2020. Dr. Ahmed, who is an Associate Professor of International Business at FORE School of Management pointed out key issues that can help comprehend a pandemic-induced global order. Referring to the United States-China rivalry, he called for geopolitical isostasy that can establish an equilibrium among key factors viz. indispensability of economic partnership, response to humanitarian needs, and pro-active security cooperation. He also discussed mega-regionalism in international trade citing examples of the Trans-Pacific Partnership and Regional Comprehensive Economic Partnership and maintained that they are destined to play a larger role in the post-pandemic world. He also emphasised climate change-related vulnerabilities citing examples of challenges faced by the Small Island Developing States (SIDS) and argued that these challenges should be factored in managerial decision-making.

Dr. Jitendra Das, Director, FORE School of Management, New Delhi delivered the welcome address. Dr. Das maintained that in the past few decades, there have been a series of trade agreements to essentially ease the flow of goods and services among the partnering countries. However, because of the changing geopolitics in the recent past, he said that the United States’ ‘America First’ and India’s ‘Atma Nirbhar Bharat’ are attempting to focus on local production, thereby diluting cross-border trade. He emphasised that India and the United States’ banning certain products from across the border paints a very different picture as far as cross-border trade is concerned. Such actions, he argued, are primarily a result of reported cost parity disruptions. Dr. Das, who has also served as a Professor of Marketing and as Founder Dean of Noida Campus of Indian Institute of Management (IIM) Lucknow, maintained that undue state control on the cost of production, and predatory pricing, are unfair for trade competitiveness.

Hon’ble Dr. Shekhar Dutt, Former Governor of Chhattisgarh, and Ex-Defence Secretary, Government of India delivered the Distinguished Keynote Address of the conference. He began by giving a historical overview of the defence and industrial capabilities of Russia. Dr. Dutt, who also served as Deputy National Security Advisor in the Government of India said that the Soviet Union brought in a massive amount of change from the First World War to the Second World War and depicted huge capabilities in their defense technologies and also in certain other industrial technologies. Talking in the context of emerging realities in the domain of business, he called for organizations and people who are able to anticipate changes and convert them into opportunities for developing organizational competitiveness. He also emphasised the increasing role of technology in the global business environment. Dr. Dutt maintained that in the new global realities, it is pertinent for organisations to revisit their business models accordingly.

This was followed by a special address by Prof. Vinayshil Gautam, an internationally acclaimed management thinker and practitioner. He emphasised how the new global realities are shaping the world. He explained about investments in healthcare with a particular emphasis on Covid19 vaccines. Further, Prof. Gautam also discussed the Bay of Bengal Initiative for Multi-Sectoral Technical and Economic Cooperation (BIMSTEC) and highlighted its immense potential and growth prospects. He also asserted that businesses will come to countries and conglomerates with strong financial sectors. He substantiated it by taking the example of China’s booming exports and how it was the only country which benefited even in the times of Covid19. Prof. Gautam, who is also Vice Chairman of FORE School of Management, and earlier held prestigious positions including being Founder Director of IIM Kozhikode and Emeritus Chair Professor at Indian Institute of Technology Delhi, explained the importance of technological development by taking examples of the United States, Russia and BIMSTEC, and emphasised on manufacturing and regional trade prospects.

Prof. Arpita Mukherjee, Professor, Indian Council for Research on International Economic Relations (ICRIER), New Delhi, also delivered a special address. She emphasised the Industrial Revolution 4.0 and highlighted the potential and prospects. She also discussed the impact of Covid19 and argued that it is important for organizations to adapt to the disruptions. She complimented the ‘Atma Nirbhar Bharat’ program and localization in manufacturing, while also highlighting the challenges it faced especially related to supply chains. She emphasised new business opportunities in technology particularly in finance, health, artificial intelligence (AI), IT and other areas. She also discussed the lack of patents and copyrights in the field of green technology which are required in order to compete with other countries. Prof. Mukherjee, a leading economic and trade policy researcher, also suggested that businesses should engage in a constructive dialogue with the government on digital financial inclusion. In addition, she also called upon the businesses to seek WTO approved subsidies and support to enhance their global competitiveness.

Finally, Dr. B.B.L. Madhukar, Chairman, FORE School of Management delivered the vote of thanks. In his speech, he also emphasised developing India’s potential in key sectors like IT. Dr. Madhukar, who also serves as Director-General of the BRICS Chamber of Commerce and Industry in New Delhi maintained that Indian businesses should focus on research-based outcomes and should be able to compete with China and other countries. He further emphasised India’s immense potential emanating from its workforce and stressed the need for enhanced training and skill development to foster the potential of youth in the country. Comparing India with China in decision-making systems, he elaborated on how India works on an inclusive and consensus-based system.

The inaugural session of FIBC 2020 set the tone for the successive technical and plenary sessions. The 2-day international conference was supported by the Association of Management Development Institutions in South Asia (AMDISA). The Diplomatist, a leading foreign affairs publication, was the media partner of the conference. The conference included participation by distinguished scholars and diplomats from various countries including the United States, the United Kingdom, Switzerland, Poland, Turkey, Thailand, the United Arab Emirates, Uganda, and other countries in Africa and Central Asia. The Rapporteuring of the inaugural session was done by Mr. Shashank S. Natarajan, Ms. Ritika Dobhal, and Mr. Pranav Arora, the participants of the International Managers’ Group (IMG) program of the FORE School of Management.