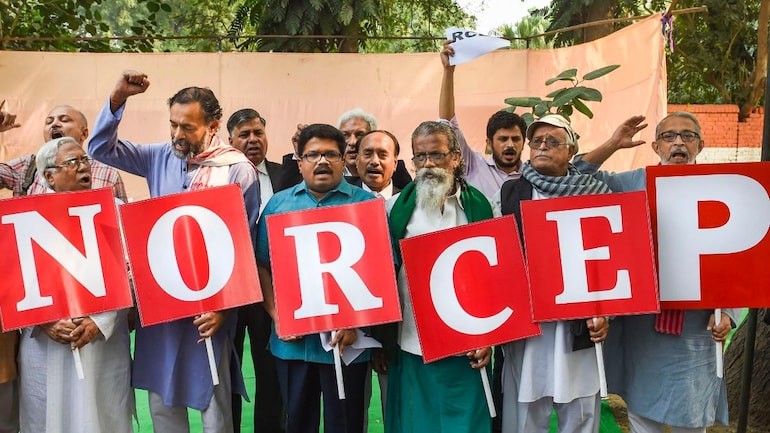 China is describing India’s decision to opt-out of the Regional Comprehensive Economic Partnership Agreement signed on November 15, 2020 by 15 Asia-Pacific nations as a ‘strategic blunder’. The agreement unified all ASEAN members along with Japan, Australia, China, South Korea and New Zealand. The partnership is expected to become the world’s largest trade bloc even surpassing the Trans-Pacific Partnership. The member nations have an aggregate global GDP of 30%.

India has been sceptical about joining the RCEP since the talks were initiated and raised various fundamental issues during discussions with the nations that were not addressed and so the decision to opt-out of the deal is understandable and even highly recommended given the current economic slowdown. India has been declared in a state of economic recession recently after the GDP growth rate for the second quarter of FY2020-21 showed a contraction in the growth rate of 7.5% following the contraction of 23.9% in the first quarter. In view of the current economic situation, with the economy being in a state of negative growth rate and businesses struggling to keep their door open amid the falling revenues and rising losses because of the global pandemic it is imperative for the government to protect the domestic producers from outside competition and give them market space to revive.

Apart from the issues within the guidelines and structure of the deal, one major factor behind India’s decision to opt-out has been India’s inability to derive economic benefits out of FTAs. Considering the trade deficit India has with 11 out of 15 members of the RCEP partner nations, it seems appropriate for the administration to opt-out of the agreement as it would open the Indian economy to further shocks. However, one question that arises out of the whole situation is if other developing Asian economies have joined the agreement as they consider it favourable and economically profitable, why did Asia’s third-largest economy decide otherwise?

The government’s rationale behind not implementing RCEP is that it is not in favour of national interest and will harm the farmers as well as producers. The idea behind following the policy of protectionism and choosing to not sign the deal was to give the domestic economy space and time to evolve and grow. The government of India had pressure from various industrial sectors to not implement the agreement and protect the economy from external competition and demand-supply shocks.

It has been widely speculated that the RCEP will reset the geo-political environment and India’s decision might affect its position as it may find itself on the exterior of the centre region, Asia-Pacific.

India’s stance on RCEP has put the Act East policy at crossroads. The Act East Policy is an initiative promoted by the Indian government to bolster social, economic, and strategic ties with the Asia-Pacific region and engaging in RCEP would have been a great tool to promote this policy, but now that India has followed the model of protectionism rather than liberalisation, the policy might get affected.

Economic diplomacy is the key to further a country’s economic, political as well as strategic interests. In the current era of globalisation and economic integration if the world’s third-largest economy-India is not confident enough to open up its market and is willing to follow protectionism to safeguard its economy there are some obvious issues within the system that need to be addressed.

India’s decision to not sign RCEP is justifiable given the economic ramifications but it cannot be denied that the country is missing out on a huge trade agreement and the opportunity to develop trade with 15 nations by acquiring a huge market share. Therefore, it is imperative for the nation to re-evaluate its trade policies as well as the domestic market. In light of the situation, it is apparent that the Indian economy needs domestic reforms. Even though India has 13 active FTAs at the moment but has failed to derive benefits from most of them signifies that the Indian economy is not stable enough to allow for free trade.

Now that the country has decided to opt-out of the agreement it needs to focus on strengthening its economy and bring about the well-needed reforms by focusing on areas it has a comparative advantage in such as high workforce and low wage rates. These factors must be considered to undertake reforms in the manufacturing sector, the policy of “Make in India” must be executed effectively to improve the competitiveness of the manufacturing sector.

The country needs to implement a security mechanism with checks and balances on the current economic model and focus on reducing its current levels of a trade deficit or the problem will sustain and the nation will have to isolate itself further which will not only affect the international trade but also its bilateral relations. The ongoing FTAs should be assessed, and remedial policies must be implemented to correct the trade imbalance and maintain a healthy balance of payment.

What is needed is a comprehensive system wherein the policies are well integrated, such as the Act East Policy and the Make in India policy and a plan for a seamless transition to avoid any more economic losses to an already distressed economy.