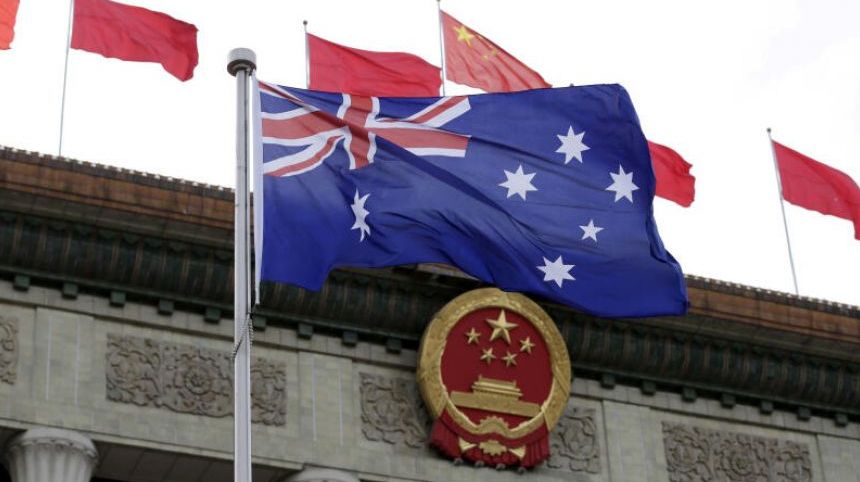 Australia and China have been engaging in what can be rightly cited as the edge-of-your-seat part of a geopolitical thriller; no-one knows exactly where the story is going or how it’s going to end. After sharing three decades of a seemingly balanced relationship despite political differences which has been dominated by geopolitical and strategic concerns, owing to co-dependent economic needs, where Australia is resource-abundant which Beijing needs to feed its energy demands, China has been Canberra’s largest trading partner in terms of both exports and imports (China’s share in Australia’s exports reached a record high of 38 percent in 2019).

The  political relations between the two countries are now going through an ebb, whereby since the beginning of the Coronavirus pandemic, Beijing’s continuous efforts to increase its presence aggressively in the face of tumultuous global times and growing Chinese influence in Australia’s domestic space that feels too close to home to be ignored (in 2017 after the Australian Security Intelligence Organisation warned of growing Chinese attempts to influence decision-making in Canberra), thereby Canberra making it clear that it will not be intimated and will stand for its values.

The tensions and the trade war between the two nations are moving at a break-neck speed for the whole world to watch. It started with Australia calling for a global coronavirus inquiry the origins of which have been traced back to Wuhan, China. As was expected China used its economic heft and China’s Ambassador to Australia hinted towards an economic backlash, following which China imposed a 80 percent tariff on Australian Barley and more recently slapped ‘distressing’ duties of up to 212 percent on Australian wine. Canberra responded by tightening foreign investment restrictions from Beijing. China issued a travel ban to Australia to avoid racist attacks by the natives and the students were warned against studying in Australia.

Australia has also been vocal about human rights concerns with respect to the treatment meted out to Uighur Muslims in the Xinjiang region as well as suppression of protest in Honk Kong. Australia responded by extending visas to Honk Kong residents. The Chinese government reacted particularly harshly to joint actions from the “Five Eyes” intelligence-sharing network that comprises the United States, Australia, Britain, Canada and New Zealand. After the alliance issued joint statements on China’s crackdown on Hong Kong’s opposition lawmakers and warned that China might “gouge and blind” the Five Eyes nations for what they believe was interference in China’s affairs and undermining of its sovereignty.

Furthermore, Australia decided to be a part of QUAD which had earlier failed to take off due to the fact that China has always viewed QUAD as an Asian version of NATO to counter its growth. Also, Australia participated in the 2020 Malabar exercise from which it had pulled out in 2007 so as not to rub China the wrong way owing to geo-economic concerns.

In a new low, recently, Chinese foreign ministry spokesman Lijian Zhao posted a fabricated image which portrayed an Australian soldier with a bloody knife next to a child. The child is seen holding a lamb. Australian PM Morrison immediately rebuked it as fake allegations and called out China saying “the Chinese government should be utterly ashamed of this post. It diminished them in the world’s eyes”, to which in a war of words, China responded by—“It is the Australian government who should be ashamed for their soldiers killing innocent Afghan civilians”.

It is clear from the above, that both China and Australia are not ready to back down. “With no sign of the political tensions between Australia and China easing, the big danger in all of this is the erosion of the economic and people-to-people ties that were once the glue holding the relationship together”.

After years of maintaining a firewall between the economic and political spheres of their relations, where China is making inroads by trying to strengthen its clout over the region and openly practicing “naked economic intimidation”, Australia is weaning of its dependency on China by growing closer to like-minded democracies like India, United States, Japan which have also been in some way or the other been at loggerhead with China in recent times. In the backdrop of the above, its only looks like a zero-sum game for both. Australia is one of several countries that, for years, has run a “dual-option model” — that is, it relies on the U.S. for national security, including intelligence sharing under the special “Five Eyes” umbrella, and turbocharges its domestic economic and investment performance by accessing Chinese markets and attracting foreign direct investment flows, property investments and tourism from there. Nevertheless, China still views individual bilateral relations in the context of wider global issues and thus, any action which may be against Beijing’s interests is viewed by it as an attempt to corner China, hence, muscle-flexing.