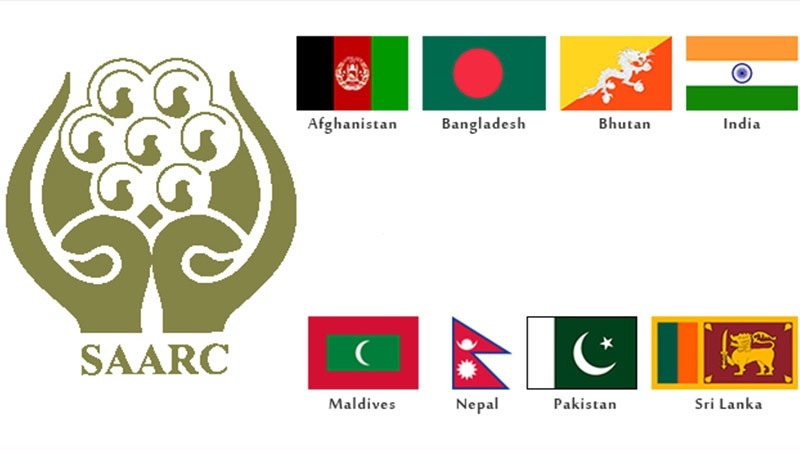 South Asia countries (India, Maldives, Bangladesh, Sri Lanka, Bhutan, Afghanistan, Nepal and Pakistan) are known for their common historical past and experience of colonialism under colonial rule. It has likewise continued to play a vital role in the understanding of the cultural and education co-operation of the region. The traditional legacy has played a very vital function in the overall nation-building means of the South Asian region. The close topographical vicinity, as well as cultural bond, has given a characteristic of commonality between these South Asian countries. The values and norms, essentially of Hinduism, Islam, Buddhism and Sikhism, are strongly rooted in South Asian communities. The South Asian Association for Regional Cooperation (SAARC) is a regional intergovernmental organization and, a geopolitical union of nations in South Asia established in the year 1985. India has educational and cultural relations with SAARC nations since time immemorial.

India has a legacy of intellectual, educational, cultural and religious synergy with Sri-Lanka. The People of Indian Origin (PIOs) who have settled down in Sri Lanka have contributed to fusing the cultures of both nations, which had signed a Cultural Cooperation Agreement in 1977 for Cultural Exchange Programmes. The India-Sri Lanka Foundation aims at an augmentation of scientific, professional, educational and cultural collaboration through civil society dialogues and magnifying association among the younger contemporaries. The Indian Cultural Centre (ICC) in Colombo fosters awareness of Indian Culture. Recently, the Government of India (GOI) granted an aid of $15 million for the advancement of Buddhist relations between the two nations. Education is another significant field of collaboration. India annually offers various scholarship openings to Sri Lankan students. Since 2017-18, Sri Lankan students have been allowed to appear for National Eligibility cum Entrance Test (NEET) dental and medical admissions. IIT JEE (Advanced) entrance examinations have likewise begun in Sri Lanka since 2017. Through the Indian Technical and Economic Cooperation (ITEC) Scheme and the Colombo Plan, India has proposed short and medium-term education programs in a broad variety of professional and technical disciplines.

India has shared a time-tested alliance with Bhutan, which is an ideal case of harmony and friendship in South Asia. Bhutan has historically experienced profound cultural intersections with India. A Buddhist saint named Guru Padmasambhava came to Bhutan from India, to perform an instrumental function in expanding Buddhism and connecting ancient links within people from both the countries. India-Bhutan Foundation aims at heightening people to people dialogues in fields like environment protection, scientific, technical research, education and culture. Nehru – Wang chuck Cultural Centre, which is part of the Indian Council of Cultural Relations (ICCR), has also been playing an imperative role in maintaining cultural relations between Bhutan and India. The Ngultrum “total solution” project supported by India in Bhutan was to help generate knowledge-based Bhutanese society. A substantial number of Bhutanese students are studying in India in diverse courses. Under Graduate and Post –Graduate Scholarships, Nehru-Wang chuck Scholarships, Ambassador’s Scholarship, Aid-to-Bhutan ICCR Scholarship, and ITEC Training Programme Scheme have helped in cementing the bilateral educational ties for many years.

Afghanistan has been a major craft and trading Centre for beyond 2000 years combining the civilizations of Central Asia, India and Persia. India-Afghanistan relations are intended to deal with difficult situations and bring harmony and prosperity in the nation. Both share a centuries-old cultural legacy with deeply established linkages in the area of architecture, language, music, arts and cuisine. Indian movies and television series are widely celebrated among the Afghani people. India-Afghanistan Foundation encourages cultural and people to people connections. India has proceeded to increase education and training opportunities through the ICCR and ITEC scholarships, and multilateral financed programmes. India declared one of the most extensive and on-going programmes in the world that will last for a further period of five years from 2017 to 2022 in the field of capacity building, education etc. in Afghanistan. India will have to search for avenues to expand in providing scholarships in engineering, medical and management institutes. Due to India’s restructuring programme for Afghanistan, it has continually endeavored to take up plans and assignments that will represent Afghanistan’s cultural heritage.

Nepal has been an indispensable part of the wider cultural past and tradition of the Indian sub-continent. Every year, innumerable Nepalis visit pilgrimage sites in India like Bodh Gaya, Hrishikesh, Kedarnath etc. and Indians on the other hand visit places like Lumbini, Pashupatinath temple and many more. Lord Buddha, who was born in Nepal, has left his traces not just in South Asia but also across the globe. Indian movies, music and language are an added segment of the India-Nepal cultural connection. Likewise, the distinct Nepali cultural elements such as theatre, fine arts, folk dance and classical music have been mixing with their counterparts in India. India provides thousands of scholarships every year to Nepali students in diverse courses and subjects. The Swami Vivekananda Centre for Indian Culture in Kathmandu has produced significant goodwill through numerous cultural occasions. Many India-Nepal Friendship associations work to support Indian culture and India-Nepal mutual ties.

India-Pakistan ties have long been laden with strains. Nevertheless, with burgeoning young populations and a shared cultural legacy, ties between both may quite well depend on how younger contemporaries understand the other side. In terms of culture, Pakistani actors and musicians have relished an extensive reputation in India, with many achieving overnight celebrity status in the Indian film industry Bollywood. Furthermore, Indian film and music are very widespread across Pakistan. India and Pakistan, especially Eastern Pakistan and Northern India, to some sort have similar cuisines, cultures and languages due to common Indo-Aryan heritage that traverse through the two nations and through much of the northern subcontinent that likewise stimulated the traditional affinities between the two countries. Educational and cultural empowerment should push for an effective reconciliation between the two nations. Pakistan should take the SAARC organization seriously to collaborate culturally and educationally. From the colonial period to today, education and culture have been a mechanism used to separate the people of the subcontinent. If these elements of soft power can transform the world, it can likewise draw India and Pakistan closer as well.

Both nations share deep cultural bonds with the exchange of cultural groups. The ICC, which was instituted in Male in 2011, handles regular sessions in yoga and other cultural classes. In the Maldives, Indian experts from India renovated historical mosques such as Fenfushi Mosque, Friday Mosque and Dharumavantha Rasgefaanu Mosque. Like many other South Asian nations in the Maldives Indian films, music and television serials are widely embraced. The GOI signed an agreement with the Government of Maldives for a US$5.30 million project for the Technology Adoption Programme in the Education Sector where more than 5000 Maldivian teachers and youth across Islands have been trained for IT skills. India remains a favored stop for the Maldivians concerning education and medical treatment. Apart from this, SAARC Chair Fellowship, Medical scholarships, ICCR scholarships and many more are offered to Maldivian students.

India and Bangladesh have close traditional, ethnic and cultural connections. The India-Bangladesh Cultural Agreement includes a variety of areas of collaboration recognized through the Cultural Exchange Programmes. The Indira Gandhi Cultural Centre (IGCC) of the ICCR of India in Bangladesh has cultural courses that are very widespread among Bangladeshi students. ‘Bharat Bichitra’, a High Commission of India Bengali literary print monthly magazine in Bangladesh has been widely read for decades. India also offers many scholarships to meritorious students in various courses including Ayurveda, Unani and Homeopathy.

To conclude, SAARC nations should endeavor at rising as a region of harmony and stability and pick up the strings and re-establish politically, culturally, socially and economically. The region shares certain common educational problems like low literacy standards, poor school infrastructure, and inferior quality of education, lack of excellence and access, large dropout rates, and scarce funding. One-fourth of the global population dwells in South Asia, a densely populated geographical region in the world. However, the education gap and unemployment are very high. Education is a quintessential base for the cultural, social and economic progress of the region’s economy. The concept of collaboration in the education division was put forth at the very beginning of the SAARC summit but limited progress was made in the last few decades. The piecemeal policies and distribution of education objectives into various committees and sub-committees have diminished the speed of advancement.

There is a need to harness the field of open distance education, but the important issue that is affecting the educational sector is the absence or lack of implementation. In the age of technology, artificial intelligence, growing middle class and a large young population, proper education and training skills are mandatory. It is high time for SAARC nations to unfold shared educational discussions and collaborative approaches for growing global demand in education. Both education and culture as elements of soft power can be a pathway of understanding, wisdom, peace and prosperity for nations. The youth is the future in the region should move ahead with an optimistic mindset and strive to discuss the common interests of one another. There is a need for more educational and cultural collaboration programmes that can significantly cement diplomatic ties between countries. Cooperation in education strives to present the contours of education so that knowledge is not confined within the boundaries of India. The establishment of South Asian University in New Delhi is a significant milestone in the SAARC region co-operation. Likewise, The South Asian Foundation provides scholarships to two students from each SAARC member nation each year to continue their higher education in any of the UNESCO Madanjeet Institutions of excellence.

Historically, India has been the destination of opportunity for students from the SAARC region. However, since 2017-18, India has seen a dip in the incoming students as more students are heading to China due to the latter’s soft power tactics of offering a large number of scholarships. Taking this into consideration GOI should increasing more scholarships, subsidize fees for students, provide more attractive perks and enhance national knowledge network partnerships by holding regular discussions through ICCR, Ministry of Human resource development (HRD) and Ministry of External Affairs (MEA). The possibility for a better educational and cultural co-operation will depend on India’s compliance to construct a common path picture for the SAARC region by pushing the Indian ambitions of being a regional power and further to keep a check on the Chinese sway in the region. China that is already suffering backlash due to COVID has been hit hard even in its soft power where many international students have fled China. This is the right time for India to push for better cultural and educational ties in the SAARC region.