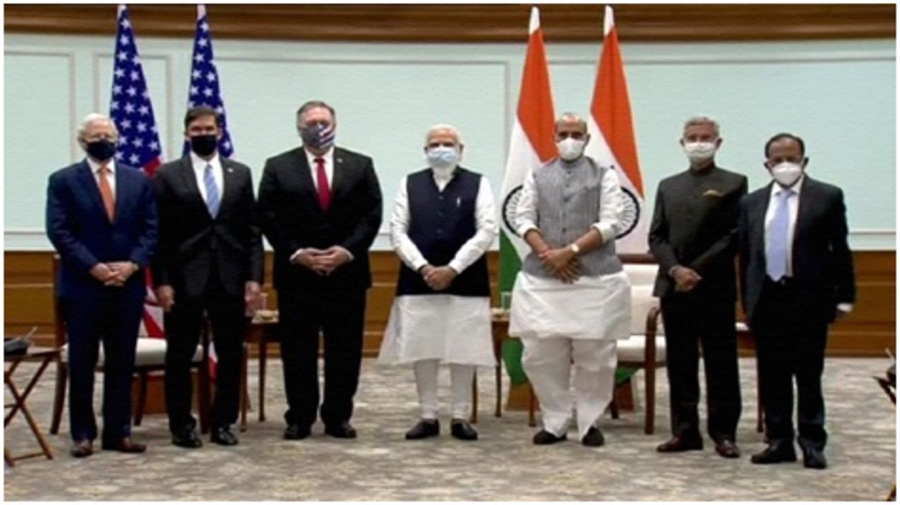 The Basic Exchange and Cooperation Agreement for Geo-Spatial Intelligence (BECA), signed during the visit of the US Secretary of State Mike Pompeo and Secretary of Defence Mark T. Esper, for the third India-U.S. 2+2 Ministerial Dialogue in New Delhi on 27 October, was not only significant but also overshadowed other outcomes of the visit. The list included agreements on Earth Observation and Science and Nuclear Energy Partnership. While BECA will facilitate greater engagement between their two militaries, its timing is equally important. Coming after six months after incursions in eastern Ladakh, the Chinese troops remain there, with little progress made on the ground in talks for their withdrawal.

The rocky road to BECA

The history of the bilateral ties between the world’s oldest and largest democracies has had its fair share of ups and downs. Post-Cold War, the two sides were cautious in their engagement till the turn of the century, which also witnessed the Pokhran-II nuclear weapons testing on India’s part, followed by the Kargil conflict. It was only in 2005, the ice was broken when the India-US Civil Nuclear Agreement was signed, accompanied by the first comprehensive defence agreement between the two countries.

Despite the nuclear deal, which too was stymied by difficult negotiations at various turns, the bilateral ties remained complicated. This can be deduced from the staggered nature in finalising the “Foundation Agreements”- the General Security of Military Information Agreement (GSOMIA) in 2002, Logistic Support Agreement (LSA) in 2016, the Communications and Information Security Memorandum of Agreement (CISMOA) in 2018, and now BECA. For the US, all four ‘foundation agreements’ constitute the cornerstone in its global network of allies – having had over a hundred nations inking them in a relatively shorter time-frame and with far less hassles.

For India, engagement of the kind has always been a tight-rope walk, between political posturing and the inadvertent implications on its external ties. Internally, the usual criticism was that these agreements impinged upon the nation’s ‘strategic autonomy’. However, compared to those before it, BECA pretty much breezed through with little resentment. At least a part of it owed to the national mood created by the border situation.

Over the past couple of decades, domestic politics has delayed bilateral strategic engagements to varying degrees of cynicism, especially in India. It is in this context that the 2+2 Dialogue and BECA are significant as they came on the eve of a contested US presidential election. In India, the Chinese occupation has changed the nation’s mood. In the US, the BECAdid not become an election issue, reaffirming bipartisan consensus on strategic alliance and agreements with India.

The timing thus augurs well for the future of bilateral strategic ties, considering that even the more important and even more visible civilian nuclear deal had faced political trouble, both in the Indian Parliament and US Congress. The conclusion of the BECA on the eve of the US presidential poll symbolises the secular separation of domestic affairs of a state from statecraft in both countries. De-hyphenating foreign policy and domestic politics acts not only as a barometer to measure the progress in bilateral ties but is also a pointer to the emerging equilibrium in bilateral ties.

Not a game-changer, but…

BECA, on its own, is not a game-changer. Rather, it is one more cog in a large wheel. BECA does not imply that India is a treaty ally of the US, nor does it indicate unquestionable American support for India in all times of ‘strategic distress’. However, the utility value of the agreement for India lies in having access to geo-spatial intelligence from US agencies. This information primarily can pinpoint the geographical location of any human activity of interest.

In the Indian context, geospatial intelligence could help in the Indian security establishment in mapping the exact locations of military assets across the border(s). However, the real importance of BECA, along with the India-specific version of CISMOA, is that it now opens the door for New Delhi to procure the much sought-after armed, unmanned aerial vehicles from the US.

Yet, the real significance of the strenuously-negotiated foundation agreements should not be analysed in isolation. When taken along with the four-nation Quad, of which India and the US are partners along with Australia and Japan, the detractors of India and their articulation for a free and open Indo-Pacific Region, will see BECA as indicating a definite shift in New Delhi’s foreign and security policy. In the backdrop of continuing border tensions with China, this could inadvertently fuel reservations in the minds of even those nations that are have been friendly towards India, even after the civilian nuclear deal, for instance. Russia and rival West European nations may wait to comment on the current phase of the US-India strategic relations.

From New Delhi, Secretary Pompeo headed to Sri Lanka and Maldives. The reception in Sri Lanka was lukewarm, owing to divergent positions on multiple aspects of bilateral relations, with China’s shadow being visible in the background – for both. A warm reception awaited Pompeo in Maldives, where he announced the decision to open a full-fledged US embassy in capital Male.  Incidentally, Pompeo was the first US Secretary of State to visit Maldives since Colin Powell in 2004, and his visit was preceded by the signing of a bilateral ‘Framework Agreement’ for defence and security cooperation, in September. Incidentally, the first-ever Secretary of State’ visit to the Maldives was in 1992 by James Baker.

With the US having seemingly stabilised India relations, it is pertinent to ask why it wants to deepen the ties with Maldives and Sri Lanka. It is one thing if the US aims at ‘denial’ for China’s strategic initiatives in the region. Still, a lot will depend on how far India has been taken into confidence, when and how. Otherwise, any independent strategic initiatives of the Maldives kind with Sri Lanka or any other country in South Asia including India’s land neighbours, can make New Delhi uncomfortable, if only over a period, not only in the context of the immediate region but also in terms of its engagement in the Indo-Pacific Region, though not necessarily to the Cold War levels!