Diplomatist > Home Featured > Defence & Security > QUAD and the MALABAR: A Concern for China?

QUAD and the MALABAR: A Concern for China? 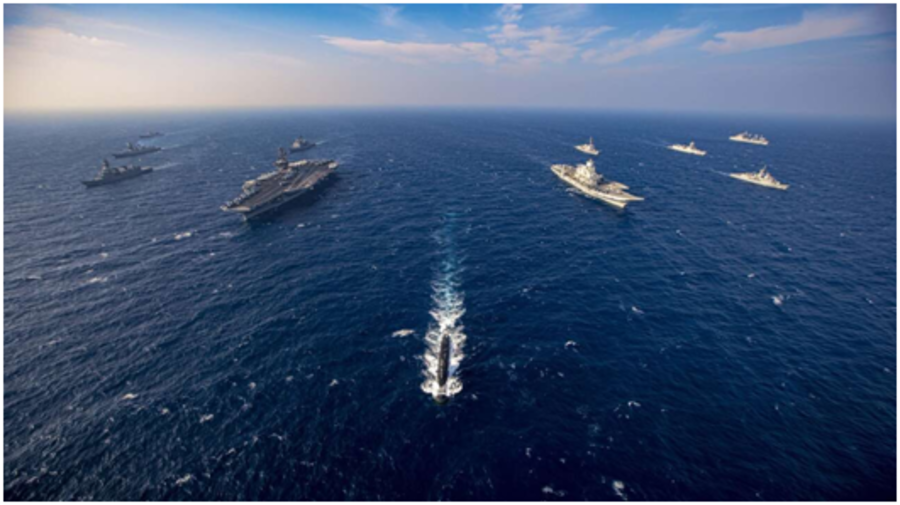 Introduction to the QUAD

The Quadrilateral Security Dialogue (QSD), as the name suggests, is a security-focussed forum organised between two premier Asian nations in Japan and India, and two outlying global powers in Australia and the United States of America (USA). Geographically, the USA and Australia are ‘peripheral’ yet inclusive Asian nation-states that profess to a wide-ranging set of regional security interests leading to a comprehensive and concerted involvement in Asian security affairs.

The QSD is the QUAD, with the moniker also being the name by which it is popularly known ubiquitously. It was founded in 2007 at the behest of Japan under the prime ministerial reign of the now-retired Shinzo Abe. The organisation remained dormant for over a decade before resuming operations in recent years. Despite its history, the QUAD retains a nascency in its geopolitical presence, activities, and influence. The QUAD’s highest-level engagements include foreign ministerial-level meetings, the most recent of which was held in Tokyo in early October 2020. Foreign ministerial level meetings were an elevation to the continued formalisation of the QUAD and took place for the first time last month.

Japan’s three partner-countries in the QUAD assumed the mantle of eventually becoming indispensable to the QUAD owing to an ineradicable congruence with emerging security interests in the greater Asian regions. Recently, the QUAD seemingly gained military materialisation with a landmark edition of the MALABAR exercises for 2020 (originally conceived between India and the United States) having now subsumed the remaining two QUAD members in Japan (since 2015) and Australia (for the first time in a decade). There is, however, no official attribution to the MALABAR being ‘the QUAD’s exercises’ by any of the four participating navies.

The MALABAR exercises were first held in May 1992 between the navies of the two most powerful democracies in the world, India and the US, in a purely bilateral form. The MALABAR focusses on fostering better ties between the navies of its member countries through large-scale naval exercises. The critical maritime undertaking, with Australia’s recent re-inclusion, has gained a remarkable stature that is beginning to differentiate its standing vis-à-vis other cooperative naval undertakings such as the KONKAN (India-UK) and the JIMEX (India-Japan) exercises.

The first phase of the new MALABAR was completed in the Bay of Bengal on 06th November after having lasted for four days. The Bay of Bengal is an area of strategic maritime interest for China, as it routinely undertakes information gathering missions in Indian waters and accords importance to the Bay’s Bangladeshi and Burmese ports. Subsequently, the four navies are geared to move to the Arabian Sea for the next round. The exercises are not restricted to India’s maritime domain but have also taken place in foreign waters (Japan, 2019). The MALABAR held between 03-06 November addressed three domains of naval warfare in the surface, anti-submarine, and anti-air. The exercises have also been dubbed as ‘war games’ by several media outlets.

Why are the QUAD and the MALABAR becoming a source of mounting Chinese anxieties?

Firstly, it is evident from recent cooperation initiatives and a strongly forged bonhomie between QUAD members that the MALABAR may be a step towards the premeditated encirclement of the Peoples’ Republic of China. Intensified multilateralism in the security domain owing to the need to curb growing Chinese hegemony and assertiveness is manifested by the MALABAR having likely become a military exemplar of the Quadrilateral Security Dialogue.

A second reason for Chinese concerns involves the deepening alliances and increasingly convergent interests between extant players in the Indo-Pacific region leading to stricter scrutiny of Chinese activities on an urgent basis. Japan, Australia, India, and the United States profess to bilateral and trilateral acquaintances that discuss, debate, and act upon pressing issues in the modern-day landscape of strategic and security affairs. The maritime bonhomie between the four countries is well reflected in a renewed MALABAR.

The sharpening of the collective naval element of the QUAD countries is being addressed through the MALABAR. With focussed exercises improving and, further ahead, likely to improvise upon the present tenets of the MALABAR which include strategic wargaming, tactical uplift, and naval friendliness, China’s Peoples’ Liberation Army Navy (PLAN) is likely to be perturbed. As per the Commander, U. S. Pacific Fleet, the exercises are aimed at incorporating advanced warfare tactics and supporting regional security cooperation.

Finally, Chinese apprehensions in the present security scenario largely encompass the rising Communist hegemon’s fears and concerns reflected in the bolstered ties of its immediate neighbours with extra-regional players w. r. t. the Indian Ocean region in the US and Australia (and even Japan, to a certain extent). The prevalence of this uneasiness in the Chinese state machinery is epitomised by a panoply of rigid, vigorous, and diverse set of mushrooming relationships between India-Japan, India-US, India-Australia, Australia-US, Australia-India-Japan, and several more. More so, the broader security domain is being prioritised above soft undertakings.

Conclusion: An Ode to QUAD

China has been a reprehensible cause for consternation to the world owing not just to the malevolent novel Coronavirus pandemic, that is sadly showing no signs of abating, but also due to its flagrant and increasingly routine territorial aggrandisement with countries such as India, Japan, Vietnam, and The Philippines. The latter is fast assuming the face of unofficial Chinese policy positions and is downplaying official Chinese policy pretensions.

The naval undertakings of the four countries in the form of a grander MALABAR leading to an integrated outlook of one of the most significant military dimensions of a country in its sea-bound forces is an all-out worry for China. The PLAN remains a work in progress despite its rapid modernisation, and China is plagued by a host of territorial disputes in the South and East China Seas. Chinese claims to its neighbouring waters being an exclusive domain of the PLAN are also being gradually contested. With the above in mind, China’s twenty-first-century dominance of the world as a whole remains threatened.

The MALABAR’s effective reigning in of the QUAD’s supposed desire to incorporate a much-coveted military component to its rising importance signals an unofficial resort to necessitated strategic behaviour on the part of its four participants. The QUAD-MALABAR fusion will essentially indicate changing times and can be posited as a case of ‘more to come’. Could this lead to a constituted and dedicated QUAD force comprising committed assets of member navies and other maritime forces with the terrestrial arena also in consideration? The world will have to wait and see.

Jay Maniyar
The author is a Research Associate at the National Maritime Foundation in New Delhi, India. The views expressed above are in a personal capacity, and do not reflect the views of his employers. He can be reached via email at jaymaniyar@gmail.com, and can be contacted on the professional networking platform, LinkedIn.
Tags:
Japan Maritime Self-Defense Forces Australia US Navy Japan MALABAR United States Arabian Sea Indian Navy Quadrilateral Security Dialogue Maritime Bay of Bengal QSD Quad Multilateralism military Royal Australian Navy India Naval Warfare
Share:
Share this...