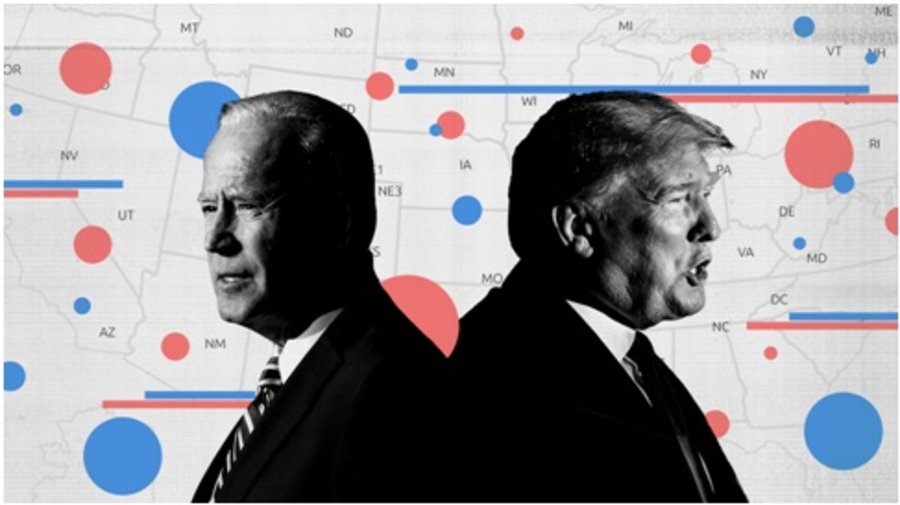 Unlike other democratic countries with multiparty systems, the U.S. political scene is dominated by two parties —the Republican Party and the Democratic Party. These two parties are sharply divided based on ideology. In general, the Republicans lean towards the right and therefore are identified as the Conservatives. Similarly, the Democrats have a leaning towards the left and are identified as the Liberals. In the U.S. Presidential election, it has become customary for political commentators and the media to categorise the states as Blue (Democratic), Red (Republican), and Purple (Swing states). This classification is based on the support — consistent or lack of it — given by each state to either of the two parties as observed in the last few Presidential elections. Given their unpredictable outcomes, these swing states end up playing a decisive role in any Presidential election.

One defining feature of the U.S. Presidential election is the system of the Electoral College. As per this system, each state is allotted a number of electors based on their population. By winning the plurality of votes in any state, a Presidential candidate gets the total number of electors assigned to that state, which is called the ‘winner takes all’ system in America. A candidate is declared victorious only when the final tally of electors for any of the two candidates reaches the magic number, 270. In recent years, the system of the Electoral College has been subjected to more scrutiny. There are a majority of people in the U.S., who demand the replacement of the Electoral College system with one based on nationwide popular vote. This is because of the perceived unfairness in the system when a candidate goes on to win the Presidency despite losing the popular vote.

The U.S. election process is also unique in many other ways. Federal elections in the U.S., whether for the Congress (the legislative body of the U.S.) or the Presidency, are governed by state laws, not federal laws. This being the case, the rules and procedures governing any federal election differ from one state to another depending on the laws passed by their respective state legislatures. State laws in the U.S. decide the voters’ eligibility, rules of postal voting, and other nitty-gritty that govern the procedure for validating the ballots. Since the state laws are passed by the state legislatures, gaining control of them in each state allows either party to enact laws to their advantage.

The election process is further complicated by the absence of an autonomous body at the federal level that coordinates the elections held simultaneously in different states to choose the President. Given the absence of a federal body, it is the mainstream media that individually call out the winner in each state and ultimately the winner of the Presidential election. The media’s rush to announce the election results oftentimes leads to confusion over the identification of the right winner at the state and national level.

With the COVID-19 pandemic raging across the U.S., many states amended their election rules to make it convenient for all eligible voters to cast their ballots through the post, which is termed broadly as ‘mail-in ballots’. Compared to the past, a good chunk of voters have cast their ballots through the post in this year’s election. However, support for mail-in ballots became a partisan issue this year, as the changed system was understood to be more favourable to the Democrats than the Republicans. Thus, by anticipating a clear disadvantage, President Donald Trump began to cast doubts over the legitimacy of mail-in ballots. Once these postal votes began to erode President Trump’s lead in the swing states, his legal team began to file a flurry of lawsuits in federal and state courts.

The Ghost of Bush v. Gore

An Indecisive Outcome Yet?

By the time of this writing, the media has overwhelmingly called Joe Biden, the winner of the 2020 Presidential election. However, President Trump has disputed with the media and claimed that the election is ‘far from over’. Contrary to the accusations thrown by the media on President Trump, his refusal to concede at this point is neither illegitimate nor unprecedented. (It is important to note here that Al Gore refused to concede the election to George W. Bush until 13 December 2000). As per the federal law, the first Monday after the second Wednesday in December (i.e. 8 December 2020) is the deadline by which each state has to finish the counting of ballots and finalise the election result. After that, each state has to draw its own list of electors (who make up the electoral college of the state) and get them to vote for either of the Presidential candidates by no more than 41 days from the day of the election (i.e. 14 December 2020). Moreover, the formal declaration of the winner has to wait until 6 January 2021, when the Congress convenes to count the electoral votes.

At present, a number of lawsuits filed by Trump’s campaign are still pending at the federal and state courts. Through these lawsuits, President Trump has sought a recount in Wisconsin, besides seeking other legal remedies in a handful of states. With the federal law mandated deadline falling on December 8, the Republican team has one month to draft a legal course with the hope of getting a favorable outcome in the election. However, election watchers have ruled out a dramatic twist to the story even if President Trump ends up posting victories in almost all pending litigations. Even then, until the ‘official’ winner is declared, it is better to embrace a wait-and-watch attitude towards the events that are likely to unfold in the coming days.