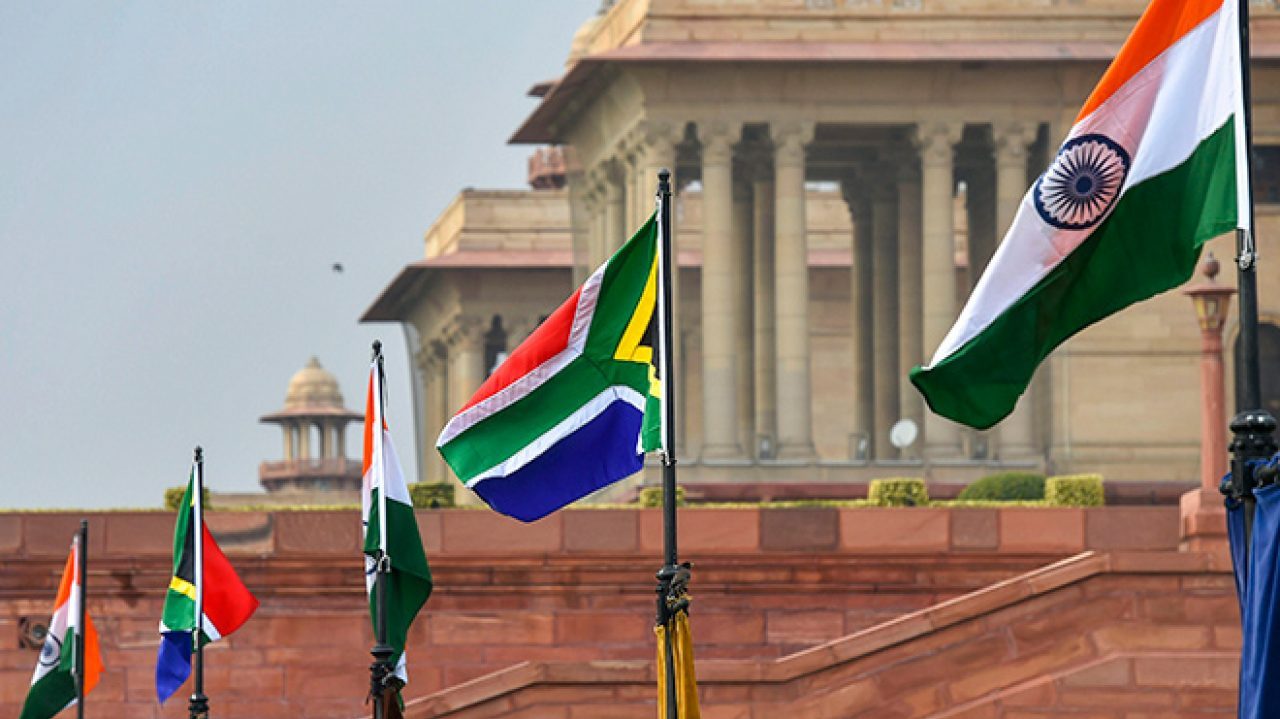 Since the end of apartheid in 1994, relations between South Africa and India have grown from strength to strength. Although, historical links against colonialism and racism served to forge a bond between the two countries, today the India-South Africa relationship is typified by shared political, economic, and strategic interests in which both countries seek win-win engagements.

Due to South Africa’s apartheid government, bilateral relations between New Delhi and Pretoria remained strained for over four decades. In 1946, India was the first country to cut trade ties with the pre-apartheid government and, subsequently, impose a complete embargo on South Africa. This action was taken by India to pressure the South African government to dismantle apartheid. Following its independence in 1947, India intensified efforts to place the issue of apartheid on the United Nations (UN) agenda as well as the Non-Aligned Movement (NAM) and other multilateral organisations. After negotiations between the South African Government and the African National Congress (ANC) – the main anti-apartheid organisation – in 1993, India restored formal relations with South Africa. In 1994, the two countries established a Joint Ministerial Commission (JMC) to “identify areas of mutually beneficial cooperation.” The India-South Africa relationship was further elevated, in 1997, with the signing of the Red Fort Declaration on Strategic Partnership; this committed both nations to improve cooperation efforts

Since the re-establishment of diplomatic relations in 1993, cooperation between India and South Africa has deepened and advanced on various fronts including politics, trade and investment, minerals and energy, communication and technology (ICT), security, agriculture, arts and culture, sports and recreation, human resource development, and consular and immigration issues. On a multilateral level, the two countries believe that international “institutions must [reform] to reflect the shifts in political and economic power.” This shared outlook has encouraged teamwork between India and South Africa in international organisations such as the World Trade Organisation (WTO), the UN, the Group of 20 (G20); as well as, more exclusive groupings such as the India-Brazil-South Africa Dialogue Forum (IBSA), the Brazil-Russia-India-China-South Africa (BRICS) platform, and the Indian Ocean Rim Association (IORA).

Improved bilateral cooperation between New Delhi and Pretoria is especially evident in the economic and defence sectors. India is South Africa’s fifth-largest trading partner, and South Africa is India’s second-largest trading partner in Sub-Saharan Africa, after Nigeria. As of 2019, trade between the two countries totalled over USD 10bilion; this is a significant increase from USD500million in 2001. In 2016, both countries committed to setting a target of doubling trade and investment to USD 20billion by 2021. However, due to COVID-19, which has had a significant impact on the global economy, India and South Africa are likely to fall short of achieving this goal. Approximately 140 Indian companies invested close to USD 4billion in South Africa as of 2018, creating employment for over 18,000 people. Indian companies have primarily invested in South Africa’s mining, pharmaceuticals, automotive, financial services, and ICT sectors. South Africa is the third-largest African investor in India; in 2014, the country’s foreign direct investment (FDI) stock in India was approximately USD 112million.  Although South African “investments in India are small in number, they are value-added investments,” focusing on the banking and financial services as well as healthcare.  Since the establishment of the India-South Africa Commercial Alliance in 1993, various other initiatives have been undertaken to identify and exploit commercial opportunities between the two economies.  Such initiatives include the India-South Africa Business Summit, the Invest in India Business Forum, the India-South Africa CEOs forum; and, the Joint Working Group on Trade and Investment born out of an MoU between Invest South Africa and Invest India, signed in 2019.

Since the signing of an MoU on the Cooperation in the Field of Defence Equipment in 1996, India and South Africa have strengthened defence and security ties. As the only arms manufacturer in Africa, South Africa views India – one of the world’s largest arms importers – as a viable partner for defence trade as well as joint ventures in defence research and production. Training exchanges, joint exercises and information sharing with South African defence forces are important for India because South Africa is a major regional power strategically located in the Indian Ocean Region. With South Africa having one of the most advanced military forces in Africa, India recognises that its participation in maintaining peace and security in the region is vital. At the turn of the century, the two countries further improved defence relations with an Agreement on Defence Cooperation (2000) and an Agreement on the Supply of Defence Equipment (2003). Following these agreements, Indian and South African armed forces increased joint military exercises and improved maritime security cooperation under the IBSA framework. In 2015, an Indian defence company signed a USD 80million deal with a South African firm for Integrated Defensive Aids Suites (IDAS). Upon the South African president’s visit to India in 2019, Indian officials agreed to a partnership with DENEL, a South African state-owned military technology company; the details of the agreement are yet to be disclosed.

Engagements between India and South Africa, especially in the economic and defence sectors, demonstrate that the India-South Africa relationship has grown in leaps and bounds, beyond mere commonalities in their struggles for freedom from oppression. Both value each other as development partners and their unique and multifaceted relationship serves as an example for global south cooperation. Looking forward, as countries seek to navigate a COVID-19 world, both India and South Africa are likely to draw on their strong bond and tag-team in international platforms to champion the developing world. This was already evidenced recently, in October, at the WTO when India and South Africa submitted a landmark proposal to make COVID-19 medication, equipment, and vaccines more accessible to developing countries. If this proposal is approved, not only will it reinforce the bond between the two countries, but also bolster their status as emerging powers.