INDIA – SOUTH AFRICA RELATIONS: HISTORICAL GOODWILL AND A VISION FOR THE FUTURE 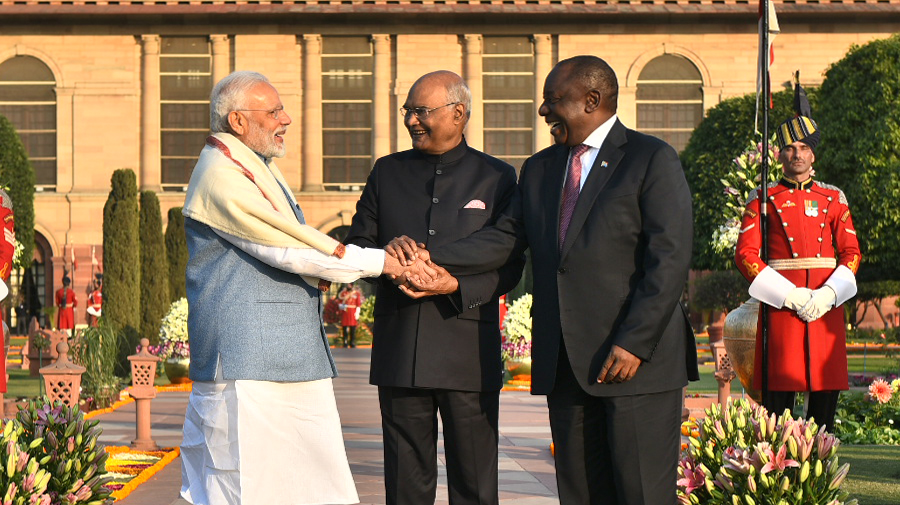 India and South Africa have had relations and contacts for hundreds of years. Records trace these relations to the late 15th century. By then, it is alleged that Indians were already found in parts of South Africa, where for instance, it was an Indian who helped to transport the Portuguese explorer, Vasco da Gama, from Natal to India, at the close of that century. In the 18th century, India became part of the British Empire, a process that only ended in the immediate aftermath of the Second World War in 1947. Similarly, at the beginning of the 19th century, South Africa also fell under the British Empire, a process that continued well into the 20th century. Those relations then increased the movements of peoples in either direction, with most of the movements facilitated by the waters of the Indian Ocean which both countries share. As of the year 2020, there are over 1.6 million people of Indian descent resident in South Africa. There are also hundreds of South African peoples currently involved in trade and academics in Indian schools and universities. This article traces the relations between the two countries, during the colonial era, during the fight for independence, and during the post-colonial period. The current picture, as will be highlighted later, is that the relationship between these two “middle power” countries, has grown from strength to strength.

Once British colonial rule was entrenched in South Africa, the British colonists relied on Indians to perform several roles. Among them included working as indentured workers in plantations, and constructing roads, railways, and government buildings in South Africa. Some Indians also became government workers and yet others, especially the Sikhs, joined the police force in that country. In economic terms, Indian businessmen, from such areas as Bengal, Bombay, Calcutta, and Madras, also trekked to South Africa to establish shops in the urban centers and cities of South Africa, including in Natal, Johannesburg, and Durban. The Indian-owned shops supplied the indigenous South Africans, other African labor migrants working in the mining areas, and some Europeans with basic products for their households. The goods sold were sourced from either Europe or Asia, thus placing the Indian shop-owners as the middlemen in connecting South Africa with the global market. One of the most famous Indian migrants to South Africa at the time was the lawyer and later political leader, Mahatma Gandhi, who arrived in South Africa in 1893. He played an important role in that country’s racial relations and the struggle for freedom. Thus, the Indian migrants to South Africa played a critical role in laying the foundations for modern South Africa’s socio-economic and political foundations.

On the political scene, Gandhi’s Satyagraha movement also traces its roots to his time working in South Africa. Advocating for peaceful co-existence and non-violence in the fight against colonial rule, once it gained her independence in 1947, India was one of the first countries to support the African National Congress (ANC). As Apartheid took center stage, India also severed its economic, political, and cultural-sporting relations with the South African government. India also championed South Africa’s independence at such forums as the UN General Assembly and the Non-Aligned Movement (NAM) where India was a founder member. The ANC was also allowed to establish its international office in New Delhi in the early 1960s. Many of the Indian migrants to South Africa also joined opposition political movements, later political parties, including the ANC and the South African Communist Party (SACP).

Due to the local pressure for change and the international embargos placed on South Africa, led by India and other global powers, the Apartheid regime was defeated in the early 1990s. As Nelson Mandela of the ANC took over the reins as President of South Africa in May 1994, India became one of the first countries to establish diplomatic relations with the democratic era in South Africa.

Since then, the two countries have enjoyed cordial diplomatic relations. There have been high-level exchange visits by the leaders of the two countries. For instance, there is the India-South Africa Joint Ministerial Commission (JMC), set up in 1994, which brings together the foreign affairs ministers and other interested government organs. The latest of such meetings took place on 17 January 2020, and India hosted it. Furthermore, since signing a joint “Defense Memorandum” in 1996, the two countries have also shared intelligence reports, defense equipment and naval ships, and co-coordinated the training of troops.

In economic terms, there have also been continued business transactions by individual businesses and large companies from both countries. India is now South Africa’s biggest trading partner in the global south. In 2006, the two countries signed the Tshwane Declaration, agreeing to treble their trade volume by the year 2010. Key exports from South Africa to India include gold and other minerals, jewelry, coal, coke, briquettes, chemicals, metals, and paper products. Major Indian exports to South Africa include the following: vehicles, petroleum products, iron and steel, cereals, textiles, and pharmaceuticals. Since 2010, both India and South Africa became members of the BRICS group of countries alongside Brazil, Russia, and China. The BRICS group plays a critical role in stabilizing the global economy, rather than leaving this only to the traditional G7 countries. Since 2003, alongside Brazil, the two countries are also members of the India-Brazil-South Africa Dialogue Forum, known in short as IBSA. This organization helps to promote democratization and socio-economic development in the IBSA circles and in the global south.

The two sections above, have showcased that India and South Africa have enjoyed cordial relations, more especially since the early 1990s (when South Africa gained her full independence). Long may such relations continue in the new world order created in the aftermath of the global Cold War. To do so, there are several areas that the leaders of the two countries, Prime Minister Narendra Modi in India and President Cyril Ramaphosa in South Africa, must consider. One area that is lacking for South Africa, and indeed in other African countries, is that of the ICT industry. India must assist by providing training to South African students and offer lower prices for machines and gadgets to South Africans.  In the agricultural production sector, South Africa can also benefit from its relations with India. This includes India being a source of farm inputs (such as hybrid seeds and fertilizers) and farm machinery (especially treadle pumps, tractors and harvesters). India’s high population could also serve as a reliable market for South African agricultural products. As the world is now experiencing a global pandemic (the COVID19 pandemic), and as both India and South Africa have been significantly affected by the pandemic, this must be the time for the two countries to embark on extensive collaborations in the health sector. They must collaborate in finding the vaccine, the medication or cure for the virus, and in the manufacture of personal protective equipment (PPEs), including face masks, gloves, shoes, and helmets. Since these two countries are among the most stable democracies in the global south, they must use their powers to help in the consolidation of democracies in the region. Such conversations must also focus on such themes as climate change and global warming, child labor, and better terms of global trade. Their defense cooperation must also see to it that they lead the way in eliminating piracy and terrorism in the Horn of Africa, the Indian Ocean, and other parts of Asia, and more importantly to stop the proliferation of nuclear weapons across the globe. Such collaborations will make these two global powers become development partners, not just for their two countries, but also for the entire global south.

Paul Chiudza Banda
Author is a Historian, currently based at Tarleton State University, in Texas, USA. His research interests are in Malawi’s political and economic history and Africa’s relations with the Indian Ocean world.
Tags:
India Africa SouthAfrica COVID-19 trade
Share:
Share this...