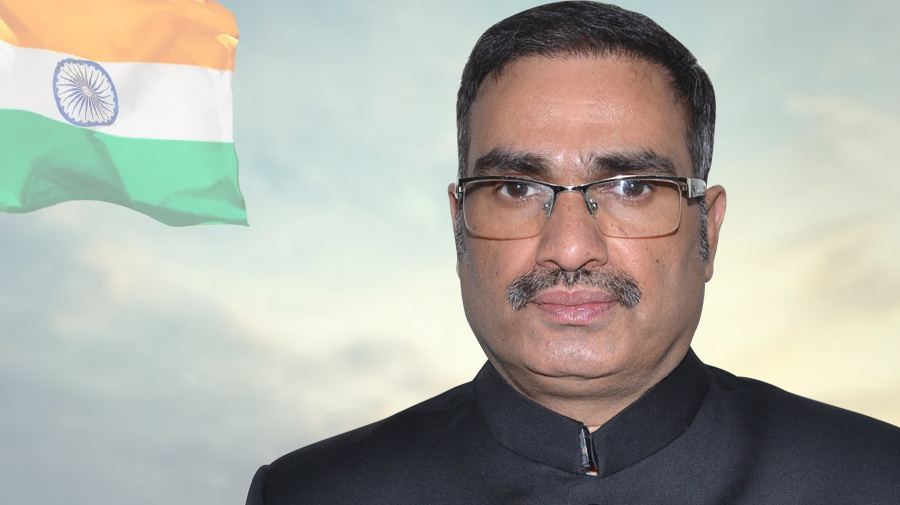 Diplomatist Business Editor, Kanchi Batra interviewed Shri A. Ajay Kumar, High Commissioner of India to Uganda, regarding the India-Uganda relation and cooperation amid the COVID-19 period.

Q. For an astute diplomat like you, having a distinguished career spanning two decades, serving India in various capacities, tell us about your journey so far and what it means for you to serve your country?

During the two-decade-long career in Foreign Service, I have been able to serve the country in various capacities in various countries while enriching myself with rich and varied experience. I have been fortunate to spend a significant portion of my career in West Asian countries, an area having vibrant and enduring links with India since ancient times. I have served in various capacities in Iran and Bahrain for about 9 years and as Ambassador of India to Iraq during 2014-15. Evacuation of Indians from Iraq in 2014 in the wake of terrorists take over large swathes of that country was very challenging and at the same time fulfilling.

Q. India and Uganda share historical relations spanning over a century. How is it evolving in recent years? How do you see India-Uganda ties, going forward in the wake of the coronavirus pandemic? What type of initiatives are you planning to build with Uganda when this crisis is over?

India and Uganda share historical relations spanning over a century. Indians first came to Uganda at the beginning of the 20th century. Relations between India and Uganda, over the years, have considerably broadened and deepened in areas such as political, defence, economic, commercial, cultural, education, health and tourism. As the world was bracing to face the pandemic, Prime Minister Shri Narendra Modi had a telephone conversation with President Yoweri Kaguta Museveni of the Republic of Uganda on April 9 where they discussed the health and economic challenges arising out of the COVID-19 pandemic. Prime Minister assured President Museveni that India stands in solidarity with its friends in Africa during the present health crisis, and would extend all possible support to the Ugandan Government’s efforts to control the spread of the virus in its territory. The Government of India gifted a consignment of medicines to the Government of Uganda to help in the fight against the Covid-19 pandemic. In addition, the Indian community in Uganda was also in the forefront to fight the pandemic and rendered immense contribution to the Government of Uganda.

Q. What is the volume of Indian Investments in Uganda? What are the possibilities of increasing this?

With a market economy, ideal climate, ample arable land, young and largely English-speaking population, Uganda offers numerous opportunities for investors. Uganda maintains a liberal trade and foreign exchange regime. During the last 5 years approximately US$ 547 million FDI came from India. Airtel, Tata, Cipla are some of the Indian Companies having a major presence in Uganda. Uganda offers numerous opportunities for investors, hence there are possibilities for India to make its investments stronger in Uganda in the field of power, agriculture, construction, infrastructure, technology and healthcare sectors.

Q. Cooperation between India and Uganda spans a range of areas like agriculture, infrastructure, technology, healthcare, education, tourism, etc. Are you satisfied with the way things are shaping? What more, according to you, needs to be done.

Relations between India and Uganda have seen greater content and cooperation in the areas of political, defence, economic, commercial, cultural, education, health and tourism, etc. Many Ugandans travel to India for medical treatment and for pursuing higher studies in universities/institutions of repute. Several Indian commercial delegations have visited Uganda to explore trade and investment opportunities in the country. Uganda has put in place Buy Uganda Build Uganda (BUBU) policy.

India has always played a significant role in enhancing the bilateral trade between India and Uganda. India’s support in various areas of development in Uganda is aimed at capability building in Uganda. Initiatives like Tele-medicine centre and a tele-education centre were set up in Kampala under the first phase of the Pan-African E-Network Project and Africa e-network project, e-VidyaBharati & e-Aarogya Bharati (e-VBAB) in the second phase. India offers long term and short term training courses under ITEC to Uganda, numbering about 125 in a year. 30 Ugandan students travel every year to India to undertake under-graduate, post-graduate and research programme on fully paid ICCR scholarships. During the year 2019 and 2020, India has gifted NCERT Textbooks for school going children in Uganda. In October 2019, a Bhabhatron Radiotherapy machine to Uganda Cancer Institute was donated to Uganda which proved beneficial and saved many lives. The government of India also donated Medicines to the government of Uganda to help in the fight against the Covid-19 pandemic.

The government of India gifted vehicles for civilian and defence use and Laptops to the Ministry of East African Community Affairs of the Government of Uganda. During the visit of Hon Prime Minister of India to Uganda in July 2018, India offered Uganda a total of $205 million worth of Line of credit to help in electricity distribution, infrastructure and invest in the agriculture sector, which employs the majority of its workforce.

India remains committed to building on its longstanding development partnership with Uganda, especially in the field of cotton. The Cotton Technical Assistance Programme (Cotton TAP) was announced for 7 African countries including Uganda under the 2nd India-Africa Forum Summit held in Addis Ababa. The first phase was completed in Uganda which included setting up a Bio Pesticide lab, conducting a training programme on modern cotton production technologies, Training of scientists for use of agricultural implements, and training on post-harvest management and value addition to crop residue. The second phase of the Cotton Development programme is expected to be implemented in 2021.

Q. What are the challenges to growing bilateral economic ties?

The volume of bilateral trade has increased from US$ 576.46 million in 2014 to USD 607.79 million in 2019. India is the second-largest exporter to Uganda. Numerous engagements between the private sectors in India and Uganda have deepened the involvement of Indian private sector companies in Uganda’s economy.

As the economic scenario in the short-run will be shaped by the COVID-19 pandemic and humanity’s responses to it. However, both countries have stood shoulder to shoulder in the fight against COVID-19 and its socio-economic consequences. India has shared with Uganda the fruits of technological advance from highly developed pharmaceutical and textile industries. Uganda and India have continued to work together in areas covering international cooperation such as participation in the virtual International Solar Alliance (ISA) General Assembly in October 2020 to areas covering entrepreneurship training etc.

Q. What are the common interests of India and Uganda in the international sphere?

Uganda and the East African region as a whole have deep rooted historic relations with India. The East African economies are some of the fastest-growing economies and with its largely English-speaking people is an ideal destination for Indian businessmen and investors.

Both India and Uganda closely engage with regional and international issues of mutual interest and concern. During Indian Prime Minister’s visit to Uganda, both the countries reaffirmed the need for a comprehensive reform of the UN Security Council, including its expansion, to make it more representative, accountable, effective and responsive to the geopolitical realities of the 21st century. India and Uganda reiterated their commitment to intensify their cooperation in the United Nations and other multilateral organizations in order to address current global challenges such as climate change and to foster international and regional peace and security, as well as sustainable development.

Q. Could you put India’s growth trajectory during the past 10 years into perspective?

We have seen national interest taking center stage in the conduct of domestic as well as foreign policies during the last 5-6 years. A number of historic errors associated with our colonial and partition history have been rectified. Revolutionary reforms have been carried out in the administration to ensure every rupee spend by the Government of India reaches the targeted beneficiaries. A significant amount of work has been done on aspirational goals including the comprehensive reform of educational policy, creating a favourable ecosystem for startups, sustainable development and new and renewable energy. A firm foundation for Atmanirbhar Bharat has been laid during this period.