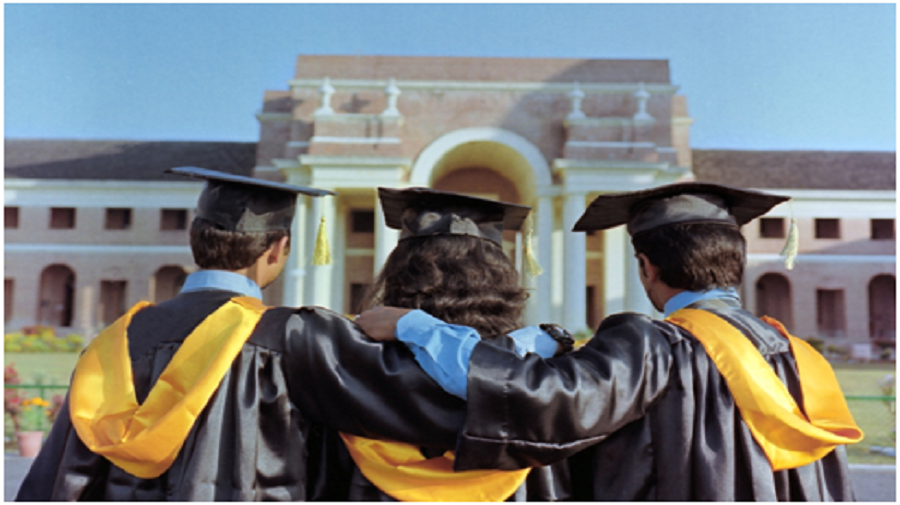 Understanding India or the idea of India as a civilization is a grand idea. Unraveling it is quite uphill because it is not an anachronistic phenomenon. Rather it is a massive historical journey from ancient to middle age, and incessantly in the modern age when we speak of the Fourth Industrial Revolution and revolution in data science the onward march goes on redefining its relations with a society that it has to feed and changing time to cater. As Nehru’s Tryst with Destiny speech on the occasion of India’s independence made it amply clear. Yet, to unravel the core of Indian thinking we have to delve into spirituality and spiritual philosophy that guided the minds of the young learners in Tapovan-centred education. Like production which consists of land, labour, capital and instruments, education is a quadruple concept comprising of Guru, Sishya, Syllabus and Institution/environment. All these were ideally followed in the models called Nalanda or Vikramshila Bihars. The idea was simple living but high thinking. We wonder that much before the advent of the European Enlightenment of the eighteenth century, how these models became a powerful grid of intellectual flourish much like ancient Greek gymnasium. Yet these seminaries of great learning and intellectual training were not separated from the socio-economic system as Bharatvarsh was known as the land of Rishis and Krishis. It denotes a symbiotic relationship between cognitive fruition and the economic system.

The sole aim of education in India is self-realization or to know thyself (self-introspection). Through self-introspection and study of the scriptures, an individual could acquire profound insight, and the meditative union was a key to the metaphysical mystery and sublime contentment that composed the worldview. Yet, the Indian system of education was not static but deeply value-laden showing what could be attained and accomplished by devotion, and virtues. As Swami Vivekananda eloquently spoke of “man-making education and character-building education”. It is strikingly humane and categorically ethical. That is what we can call Indian ideology—the formidable force that shaped great minds like Tagore, who in his Tota Kahini spoke of the artificial nature of spoon-feeding. On the contrary, Tagore emphasized on ‘education for fullness’. It can be achieved through ‘Anandam’ or yoga for inner happiness. Gurudev Tagore’s perception of the world was holistic as he did not believe in fragmented or compartmentalized branches of knowledge. He propagated ‘universal humanism’ where all human beings are unique and the means of education is to develop their inherent potentiality and faculties.

If Tagore’s philosophy of education was harmonious development of different spheres of individual life, then Gandhi’s experiment with truth offered a grand alternative to the Euro-centric mindset. “Gandhi was an idealist—but a practical idealist” observed Shri Morarji Desai. It is, therefore, significant to reflect upon his vision of education today when education is being seen in narrow strategic terms for certain goals like prosperity and competitive edge in the job market. In Gandhi’s scheme, however, education did not imply only reading or writing but to him, education was a vision like a telos, the core message being the attainment of ‘Ram Rajya’( i.e. kingdom of God, an allegorical or symbolic place where all humane treated as equal subjects under a perfect system of justice). So it had larger implications for citizenship and self-sufficient life. The idea also resonated in his ‘Sarvadoya’ mission which upheld the goal of uplift of all with dignity. Today when we reflect on the rich legacy in our intellectual inheritance of pure thinking we find in Rishi Aurobindo’s thought, where the hermeneutics of integration of human mind (psyche), body (physical), vital (life force) and spiritual pursuit lead towards “SUPERAMENTALISATION” ( pure conscious and the resulting transformation of the entire being, and ultimately, the divinization of the material world).

At present, however,  Indian higher education is de-rooted from its own base and now we treat education as a commodity and our perception towards education is propelling us towards hedonistic goals or temporary goals, not the permanent solution of the problems, whether social or individual problems. No doubt in this short period we are able to build huge infrastructure with investment in institutional buildings but how much it has boosted original research in fundamental science or whether it was driven to enhance tertiary enrolment is a point to ponder over. So, now there is almost no difference between US universities and their Indian counterparts which produce trained personnel for economic operations instead of epistemological enrichment. It does not mean the workers are a mere cog in the wheel. There are geniuses like Sundor Pichai and such stories act to showcase the value of higher education. Even we cannot forget the seminal contribution of M. S. Swaminathan in the Green Revolution or Yash Pal’s pioneering experiment in satellite technology. But such examples are few and far between. Over the last two or three decades, the signal of the transformation clearly suggests that in proportion to market competition and lucrative burgeoning opportunities in software corporations we are deviating from the main mission of our educational pursuit. Now our educated youngsters are moved by the ambition of ‘white color jobs’. This pecuniary motivation at the back of education is far away from the ethical ground and holistic ground of sustainability or the motto of social uplift or commitment. India prides her achievement on being the third-largest higher education system in the world after China and America. But our output is still lagging despite the fact that our few outstanding scholars who happen to be Bhatnagar awardees are working quietly and eminently. It testifies to McKinsey estimate that “only about 10 percent of Indian students with degrees in arts and humanities and 25 percent of Indian engineering graduates are globally competitive”. So, what we need in today’s context of challenging era is creative intellectual leadership and to provide an indigenous alternative education for civilizational distinction. It would be instrumental to open up the gates of oceanic knowledge and in the long term, it might unleash a process of progressive social change also. So the future of higher education in India wouldn’t be a monopoly of elites but its thrust area and priority would be to explore the dialogic space of our system with others. The model that Ananda Kumar, the famous Indian mathematics teacher offered was built on indomitable spirit while successfully infusing confidence among the poor students rather than a sense of complacency and superiority of ours and indifference to others. Let us conclude with such benign expectation that we shall climb new heights with such enthusiasm and diligence.