India-EU Partnership in Clean Energy: Collaboration for the Future 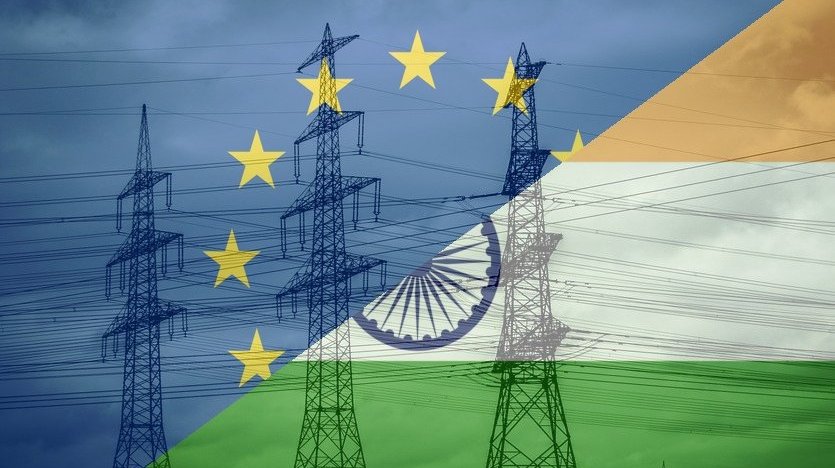 Energy diplomacy of the 20th century was dominated by fossil fuels. While fossil fuels continue to dominate the sphere of energy diplomacy, the focus on renewable energy sources has risen in importance in the 21st century. This is primarily because countries that import their sources of energy, now have to look towards energy security. Import-dependent countries can secure their supply with the help of renewable sources, which are readily available and infinite in supply.

India’s per capita electricity consumption is lower than one-fourth of the global average. But the fast-paced Indian economy’s energy demand has risen steadily at almost 6% in the past two decades. This makes India the 5th largest in terms of primary energy consumption.  At this rate, India would have to look towards renewables to secure its energy demand and also reverse the effects of climate change. On the other hand, the European Union’s energy consumption has been significantly higher than that of India’s since the 1950s. However, the problem lies in the fact that energy was cheaper and more readily available in the 1950s than it is now. If the EU’s energy consumption continues at this pace, then it would be unfeasible to meet its demands in the future. Importance needs to be given to alternative sources of energy in both the markets. India and the EU’s partnership in this sphere will have to explore increasing their utilisation of presently available renewable energy technology and also the development of novel solutions for the future.

As a part of its environmental commitments, India plans to install 40 GW of PV rooftop solar systems and 60 GW of ground-mounted solar projects by 2022. Along with its ambitious aims, India also has favourable climatic conditions with average solar irradiation of 4-7 kWh/m2/day with about 300 sunny days a year. India also ranks 4th in the world in terms of installed wind energy capacity with over 37GW. India has a 7,600 km coastline which presents good prospects for harnessing offshore wind energy. The government in 2015 also introduced a ‘National Offshore Wind Energy Policy’ to properly utilise India’s wind energy potential.

India’s renewable energy goals make it an attractive market for EU investment. India ranks 7th on EY’s Renewable Energy Country Attractive Index (RECAI) 2020. The rapid economic growth and steady rate of electrification guarantees demand for renewables in the Indian market. The abundance of available renewable sources throughout the year along with India’s cheap labour market make it easier for investors to complete their projects. Furthermore, the government’s push for renewable energy makes subsidies available for investors in the sector along with legislation to favour foreign investment. All of these factors together set the stage for the EU-India partnership in the renewable energy sector. However, the EU-India partnership in this sector should aim for long term goals to secure future energy needs through collaboration in research and development.

ITER means ‘the way’ in Latin, and formerly the International Thermonuclear Experimental Reactor project paves the way for future collaboration in clean energy. The ITER project is a collaboration to build the world’s largest tokamak which is “a magnetic fusion device that has been designed to prove the feasibility of fusion as a large-scale and carbon-free source of energy based on the same principle that powers our Sun and stars”. India as a member of the ITER project stands to gain as well as showcase its scientific expertise. The ITER shines a light on the ‘path’ for future India-EU collaboration.

India-EU partnership in renewables should focus on long term goals. While the ITER project shows a novel path towards clean energy it is still a long time to go before the project makes gains on the ground. India-EU partnership needs to shift its focus on research and development for immediate solutions that could either make present harnessing of renewables easier or present a novel solution at a faster pace. The dissemination of best practices from the EU to India and vice-versa according to the 2017 EU-India Joint Statement on Clean Energy and Climate Change would benefit both sides in efficiently harnessing renewables. Stress also needs to be placed on the transfer of technology from the more developed EU in the field of renewables to India. Transfer of technology would make previously unavailable technology available to India and would also deepen trust and cooperation between the EU and India.

The steady rise in energy consumption, as well as a government push for renewables, calls for further partnership in this sector between India and the EU. As mentioned above, this partnership needs to allow for research and development of immediate solutions as well as focus on long term projects for clean energy. India-EU partnership in this aspect is still in a fledgeling stage and has not reached its full potential. Collaboration between both parties needs to be explored more vigorously to allow for penetration of Indian and European businesses in the clean energy sector.