Are India-China Tensions Bringing in New Dimensions to Quad? 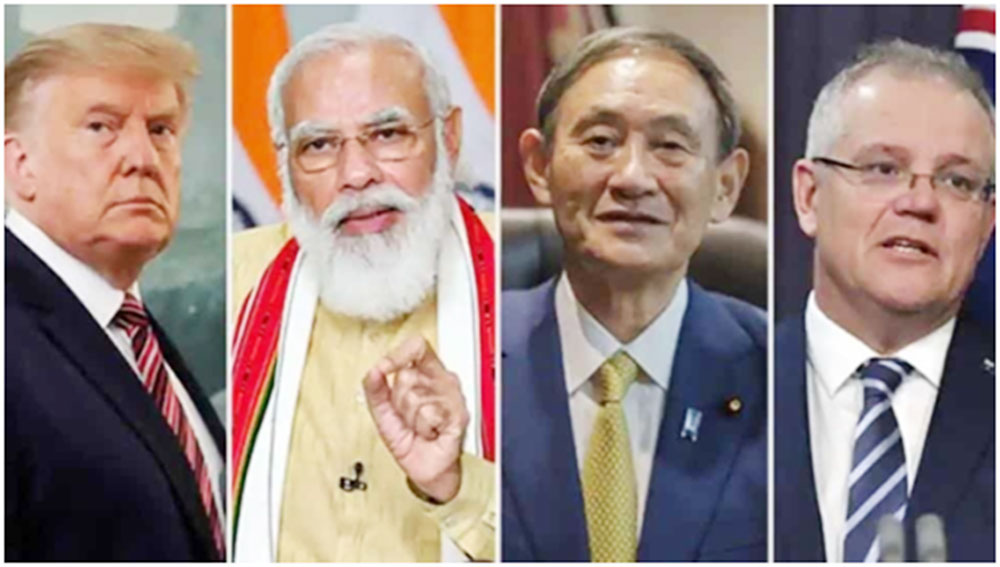 The Chinese proverb, “One mountain cannot contain two tigers”, has been the ethos behind growing Chinese injection into the Galwan Valley and eastern Ladakh. On almost all frontiers, land or water, China is proving to be a pressing concern for India. New Delhi’s rude awakening to Chinese aggression has propelled it to strengthen Quadrilateral consultations, as exemplified by significant dialogues that are queued up for India this year. Among them, are talks of hosting a Quad meeting and the India-US 2+2 dialogue. During the India-US 2+2 intercessional meeting, the two countries affirmed further discussions about a range of multilateral issues and destabilising actions in South Asia and the Indo-Pacific region. Chief of Defence Staff General, Bipin Rawat claimed that India considers the Quad would be a “good mechanism” to “ensure Freedom of Navigation Operations” in the Indo-Pacific realm.[1] As tensions mount on land, international waters have been a conduit for strategic signalling. India’s disgruntlement at Chinese encroachment on its frontiers has been expressed through the Indian Navy deploying its frontline warship in the South China Sea. This manoeuvre raised Chinese objections. Active diplomatic engagement such as the five-point plan agreed by both countries only seems to be theoretical and a far cry from being materialised, especially on the Chinese side. The LAC tensions have underscored the trust deficit that have permeated in bilateral min and led to military preparedness by both countries. Given the challenge, the pertinent question is if the Quad, and India’s position in the Quad will take on a more motivated form?

India’s reticence on injecting itself thoroughly in the Quad represents where it has stood. Several statements made by India’s Foreign Minister S. Jaishankar dwell on India viewing it as an issue-based coalition. India’s Foreign Minister said in July, “I think the U.S. really has to learn to work…with a more multipolar world, with more plurilateral arrangements, go beyond alliances with which really it has grown up over the last two generations.”[2] While India’s involvement in the league of like-minded democracies has managed to carve a space for itself by emphasising on freedom of navigation and willingness to uphold the laws of the sea; it has previously shown its reservations on the formalization of the security structure. India has engaged with Quad countries since its resurgence in 2017, but it has also decoupled the intentions of the Quad with its own vision of the Indo-Pacific region.

Quad: A springboard for US-India ties

The COVID-19 pandemic has definitely made for an interesting election year in the United States. President Donald Trump has gone the extra mile in criticising the WHO (World Health Organisation) in calling it out as an entity which lacks independence from China. The US President has even stepped up attacks on his opponent, Joe Biden, claiming that he is a “globalist sellout”. No matter what the November elections unfold, even in the case of Biden emerging victorious, US foreign policy attitudes towards India, will not vary to a sizeable degree.[3] There has undoubtedly been momentum and a recalibration of bilateral affairs between the two democracies, as exemplified by significant diplomatic engagements such as Howdy Modi and Namaste Trump. The current leadership of the United States has set in motion, new grounds for engagement with India and for the most part, it seems to be favourable. Quad has definitely provided a platform for US’s reengagement with Indo-Pacific powerhouses in Asia and has helped shape US Indo-Pacific strategy. The grouping of four has set a template for US-India cooperation in the, and has proved to be an additional spectrum in India-US ties, in the context of the Indo-Pacific. The US’s embrace of India as a power to reckon within the region, has led to amelioration of defence and diplomatic ties bilaterally. Moreover, September 25 saw senior officials from Quad countries meeting virtually to discuss cooperation in the area of connectivity, in an effort to impede China’s 5G giant, Huawei from increasing its footprint in countries, as stated by the U.S. State Department.[4] While Washington’s stance on China has been more pronounced, even in the context of the Quad, India does not see the grouping as purely anti-China or an alliance.

The transgressions along the LAC (Line of Actual Control) have definitely deepened fault lines in the India-China relationship. At an altitude of 5,800 metres, as both Indian and Chinese troops are currently patrolling forward locations in the region to avoid violent spats, much is yet to be see on the level of commitment from both sides to disengage. Indisputably, tensions on land has driven India to exhibit its unyieldingness of the matter on sea. India’s recent conclusion of naval exercises with the US and Australia this year, and its recent naval exercise held with Japan and Australia in September, is a significant step towards consolidating the regional balance in favour of the Quad countries, and also articulates India’s commitment towards the region, even amidst a global crisis. Moreover, the Quad countries meeting in Tokyo this October is an indication that the Quad has definitely grown above and beyond just collaboration for humanitarian assistance and disaster relief, from its inception in 2004.