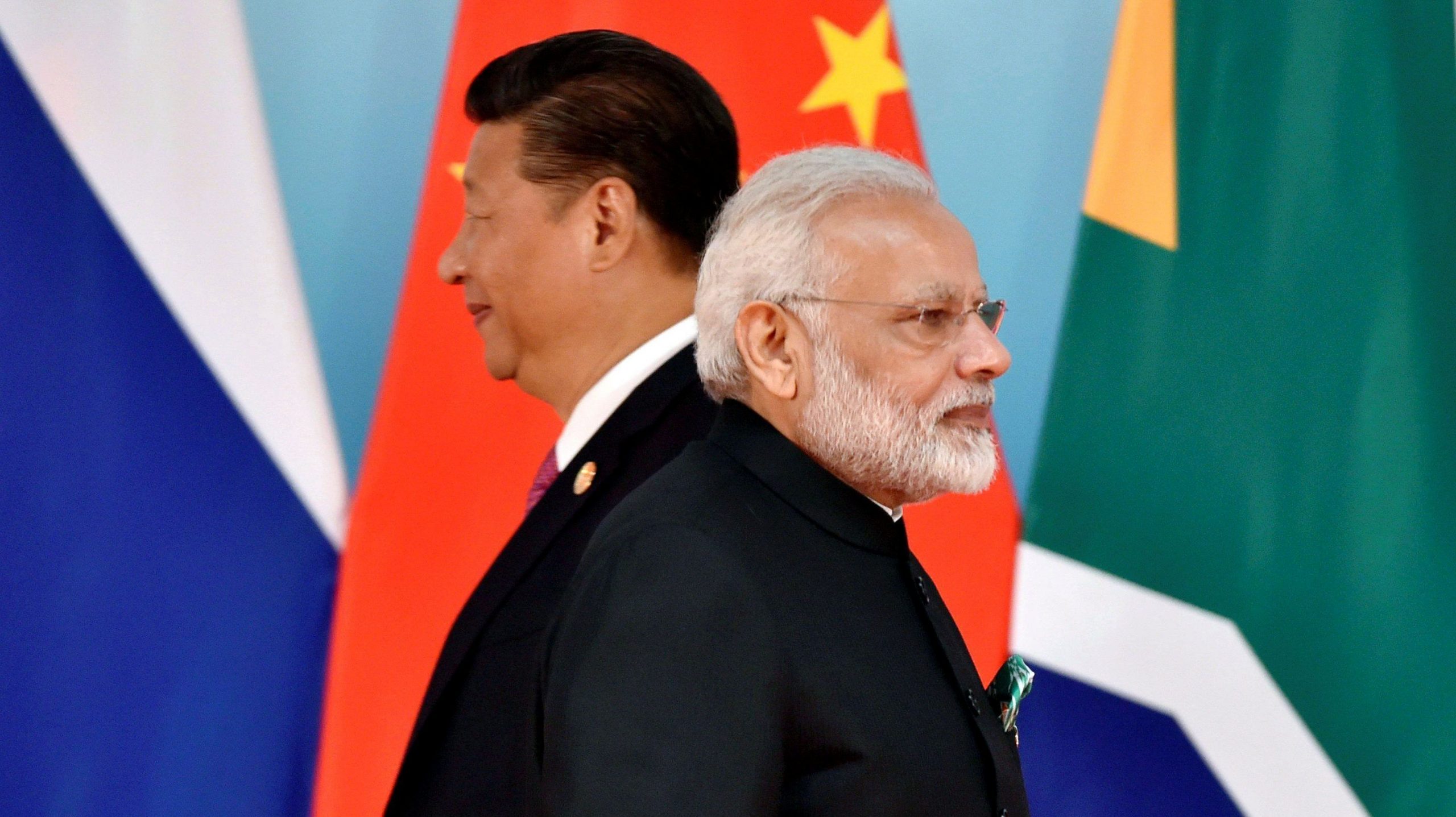 Indo-China relations have always been a test for every government. The basic approach of India and China to each other is different. While India focuses on the Nehruvian principle of ‘peaceful coexistence’, China believes in Mao’s vision of reclaiming ‘the five fingers of China’, viz. Arunachal Pradesh, Bhutan, Sikkim, Nepal and Ladakh. Since 1950s, Sino-Indian conflicts have occurred in these regions. No government can claim to have been absolutely successful in dealing with China.

In May 2014, when Narendra Modi was sworn-in as the country’s Prime Minister, he had invited all the members of the SAARC, one country was not present in the swearing-in ceremony, but it was observing the developments in India very closely. This country was India’s Northern neighbour – the People’s Republic of China, which was once called by former Union Defence Minister, the late George Fernandes as ‘India’s Enemy No.1’.

China congratulated Modi on his election victory. However, the hope of a fresh beginning of a chapter in Sino Indian relations was shattered as soon as PM Modi indicated that a visit to Arunachal Pradesh was in the offing. This was not acceptable to China. They asked him to desist from the visit to the state. Their warning to Modi could be explained in the phrase, ‘Let Sleeping Dogs Lie’.

However, Modi visited Arunachal Pradesh. China criticized him hoarsely, saying that his visit to the state was not proper as it was ‘disputed territory’. Indian Ambassador to China, Ambassador Ashok Kantha was summoned by them.

They told him that Arunachal Pradesh was explicitly on Chinese land and that it included the Chinese territories of Monyul, Loyul and Lower Tsoyul. These three territories were located between the McMahon Line – which the Chinese never agreed to and considered to be illegal, one that had bee drawn without the consent of the Chinese and had been forcibly imposed on them by the British Indian State- and the line accepted as the boundary between China and India-the Line of Actual Control. The Chinese also did not appreciate Modi’s proximity to the 14th Dalai Lama and his rapprochement towards him.

India’s ‘Neighbourhood First’ policy was announced in May 2014. This was an emphasis on the priority it would attach to its relations with all its neighbouring nations. It is guided by the firm belief that peace and security in the neighbouring countries was, in reality, an essential prerequisite for the development of the region in the interest of all stakeholders concerned, including India.

In June itself, the Chinese Foreign Minister Wang Yi visited New Delhi to hold talks with the Indian Foreign Minister Ms Sushma Swaraj and PM Modi. Soon after that, in the month of June, the Honourable Vice President of India Mohammad Hamid Ansari visited Beijing for a five-day visit.

In August, PM Modi visited Japan for five days. He said that the world was divided into two camps- the first camp supported freedom and the second camp opposed freedom, indicating the differences between liberal democracies like India and totalitarian states like China.

In September, President Xi Jinping visited India. Modi broke protocol to receive him at the Ahmedabad Airport. They had a walk on the banks of the Sabarmati river. China promised a 20 billion dollars’ investment in India for over five years. Unfortunately, throughout the visit of Xi, the Indian Army and PLA remained engaged in Ladakh when the PLA crossed over to the Indian side. So when President Xi invited PM Modi to attend Asia Pacific Economic Cooperation Summit in Beijing, Modi refused and travelled to Myanmar, Australia and Fiji. National Security Advisor Ajit Doval was appointed as the country’s special representative for Sino Indian boundary negotiations.

During US President Obama’s visit to India on Republic Day as Chief Guest, Obama and Modi spent 45 minutes talking about China and both expressed concern about its expansionist stance, especially in the South China Sea. In February, Foreign Minister Sushma Swaraj left for Beijing and met President Xi. Next, India started the eighteenth round of talks with China over the land boundary issue with National Security Advisor Ajit Doval and Doval Chinese Special Representative Yang Jiechi meeting in Delhi. Despite all tensions brewing between India and China, the Chinese threw the red carpet before Modi. President Xi Jinping took a day off so that he could receive PM Modi at his hometown, Xian. Modi was welcomed at Xian International Airport. He also spent a day with him, doubling as Modi’s tour guide to various landmarks of the city.

In 2017, at Raisina Dialogue, the Chinese Ambassador to India explained the Chinese plan of OBOR (OBOR, which was later renamed as BRI (Belt and Road Initiative)) and urged Indian participation in the same. In fact, BRI was the Chinese attempt to revive the ancient Silk Route, covering more than sixty countries. India’s objection was that China Pakistan Economic Corridor (CPEC), which was an integral component of BRI, what’s passing through Pakistan occupied Kashmir (PoK). It was an infringement on the sovereignty of India and was unacceptable to India. Most of the European and North American powers like US, Canada, France, Germany, etc. had accepted BRI. India’s refusal to do so affected China badly. To satisfy India, it decided to make both India and Pakistan members of the Shanghai Cooperation Organisation (SCO) in May 2017.

On 16th June 2017, a standoff between the Indian and Chinese armies occurred in the Doklam Plateau when the Chinese attempted to build a road in that area that put the Siliguri Corridor that connected North East with the rest of India in striking distance of the Chinese. After this 73 days long standoff, peace negotiations began between the Indian side NSA Ajit Doval, then Indian Ambassador to China Vijay Gokhale, Foreign Secretary S Jaishankar and the Chinese side represented by Chinese Foreign Minister Wang Yi, Chinese Ambassador to India and Chinese General Fan Fenghui. On 23rd and 24th April 2018, Prime Minister Modi and President Xi Jinping met at the Wuhan Summit to discuss peace between the two countries in the aftermath of the Doklam crisis. On 12th October, President Xi Jinping visited Mahabalipuram, the second informal Summit between Modi and him after the Wuhan Summit.

In the Galwan standoff, China has been successful in annexing nearly 1,000 square km of Indian territory. The Chinese Foreign Office has acknowledged this success but India lives in utter denial.

CDS General Rawat, and ACM. Bhadauria has made Army Chief General Naravane a scapegoat for our failure. Having enjoyed the confidence of the political leadership and the NSA, they have refused to rule out the possibility of a war with China, something that the US is in agreement with. India’s diplomacy has not been of much help to us.

During this week’s second Quad ministerial conference in Tokyo, Pompeo said that Chinese actions along LAC was gross aggression, Jaishankar spoke about “respect for territorial integrity, sovereignty and peaceful resolution of disputes”.

Indo-China Relations have gone through an upheaval under Modi. It began with a hope for a better future of our relations but despite having so many summits, our relations have deteriorated, culminating in the Galwan Valley crisis. Partly the crisis is of our own making. We have failed to understand China and deal with it from a position of strength but instead have allowed it to do so. We must deal with China on a two-front approach, ‘constructive engagement and cooperation’ whenever possible and ‘containment’ whenever needed. China’s border incursions, it supports to Pakistani terrorists, blocking Indian entry into Nuclear Suppliers Group (NSG), the BRI, especially the CPEC passing through PoK are serious irritants from our perspective towards China. We are challenged by China in our quest to become a regional power in Asia and the rest of the world.