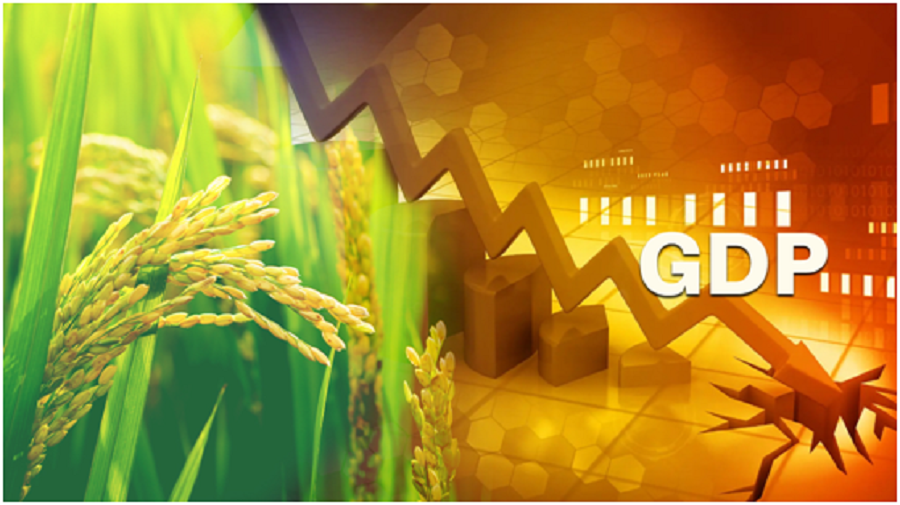 India imposed one of the strictest lockdowns in the world on 25th March 2020, bringing all economic activities to a grinding halt but started unlocking the country in a phased manner since 1st June 2020. The pandemic has affected India in many ways and has a huge impact on the GDP. The Indian economy shrank 23.9% year-on-year in the second quarter of 2020against a growth of 5.2 percent in the same period last fiscal, much worse than market forecasts of an 18.3% drop. This is the sharpest drop in the world.

The following is the impact on various sectors in the second quarter of 2020:

On the expenditure side, gross fixed capital formation recorded the biggest decrease of 47.1%. Private spending shrank 26.7%, inventories fell 20.8%, exports went down 19.8% and imports sank 40.4%. In contrast, government consumption jumped 16.4% as the government implemented relief measures to help curb the impact of the pandemic.

The following figure shows the comparison of GDP growth rate over the years:

Production has come down dramatically in the manufacturing, construction, and trade, hotel, transport sectors.  However, the expenditure came down by a heavy contraction in consumption and investment. With unlocking of the economy slowly and steadily, there is a gradual improvement in the economy but the growth recovery forecasted has been contracting for all quarters in FY2021.

Falling GDP now requires major revisions in budget estimates. In Budget 2020-21, the government has pegged gross tax revenues at Rs. 24.23 lakh crore, a 12% increase from Rs. 21.63 lakh crore in the previous fiscal. The government has already ramped up its borrowing programme and may consider increasing it further in the second half of this fiscal. Private expenditure is also expected to be impacted due to the uncertain environment and a general appetite for risk aversion by banks which impacts the credit availability. The government now has to increase its public spending to revive the economy due to the pandemic. This will increase the projected government expenditure significantly from the budgeted levels.

It is expected that the government might have to spend more to revive the economy over and above what it has already spent. RBI has helped to boost consumption and economy but the government may still have to pump up further stimulus measures for specific sectors. Government spending, reforms, and more measures to boost consumption are required to bring back growth on track.  Most of the experts believe that India will be in the recession phase if GDP contracts in the current quarter of July-September 2020.

Fitch Ratings has projected a contraction of 10.5% for India’s economy in the current financial year. According to them, GDP should rebound strongly in the third quarter of October-December amid a re-opening of the economy, but there are signs that the recovery has been sluggish and uneven. The drop in economic activity has damaged household and corporate income, while high inflation has put added strain on home budgets. Fitch projects India’s GDP contraction at 9.6% in the September quarter, 4.8% in the December quarter and 4% in the January-March period this fiscal.

India Ratings forecasts that it expects an 11.8% contraction against shrinkage of 5.3% forecast earlier, following a deeper-than-expected 23.9% decline in June quarter GDP. According to them, the only bright spot from the supply side was agriculture, as both industry and services activities have been severely impacted. It expects agriculture to grow at 3.5% in FY21 from the year earlier.

After the announcement of Rs. 20 lakh crores Atma Nirbhar package, Finance Ministry officials had said that they still did not have enough clarity on the state of the economy. The bulk of the package had then comprised monetary stimulus through liquidity measures, with just about 1% of GDP actual cash outgo by the Centre.

Public administration is driven by government salaries which do not seem to have been cut. This could mean that payments for defence equipment or payments for some public investment have been held up. States may also have cut down on their expenditure due to shifting of expenditure to disease management and humanitarian aid which may not show up in national accounts because those are mere transfers.

Experts say that some policy support is necessary to cushion further deterioration in the economy, including increased infrastructure investment by the government and demand-boosting measures. While analysts said the June GDP numbers slightly improve the chances of a rate cut in October, but unless the inflation comes below 5 percent in the next reading, there is a real chance that the RBI might opt to postpone the rate cut to December.

India could be staring at a structural slowdown rather than a cyclical one. In the current uncertain environment, there is low investment and low demand leading to unemployment and wage/salary issues.

If we are to believe the economists and experts and looking at the way the stock markets are behaving, the Indian economy is not in a good shape. With widespread pandemic, uncertainty and conflicts are all leading to a far worse situation. The question now arises is that how do we arrest this falling GDP?

We calculate GDP as:

In the current situation, consumption, investment and net exports are all low and government expenditure is not increasing significantly to have a major impact. To improve the GDP, consumption, investment and net exports have to increase. Government has to take measures to improve these. It needs to change its strategies for economic growth and promote inclusive and sustainable growth and employment with dignity. Job opportunities need to be created and productive investments are to be made. Commitment to increase trade, banking, agriculture infrastructure etc. will help in increasing productivity and improve employment level in the economy.

The government needs to influence the rate of economic growth through demand-side and supply-side policies. Under demand-side policies, it can cut down the taxes to increase disposable income and thus improve the demand in the economy. This could have a flip side too – it may lead to an increase in the budget deficit leading to an increase in borrowing. Another measure could be to cut the interest rates to boost domestic demand besides providing economic and political stability which enables the usual economic activity to take place.

Under supply-side policies, government expenditure needs to be increased, for example, investment in infrastructure and deregulation to increase efficiency and productivity. Governments generally tend to over-estimate how much they are able to increase productivity growth. Most of the technological progress comes from the private sector without government intervention. Supply-side policies can help increase efficiency to some extent, but it is debatable how much they can actually increase growth rates.

Comparing India to two other major virus-hit countries like Italy and the US, Raghuram Rajan warned that India’s “numbers will probably be worse when we get estimates of the damage in the informal sector.” Calling the Indian economy a “patient,” Rajan urged the government to provide the “tonic” of the stimulus. He warned that government officials are “underestimating” the ripple effects and damage of the current economic decline. “Instead of claiming there is a V-shaped recovery around the corner, they should wonder why the United States, despite spending over 20% of GDP in fiscal and credit relief measures, is still worried the economy will not return to pre-pandemic GDP levels by the end of 2021.”