Rise and Fall of the Crisis in the Eastern Mediterranean 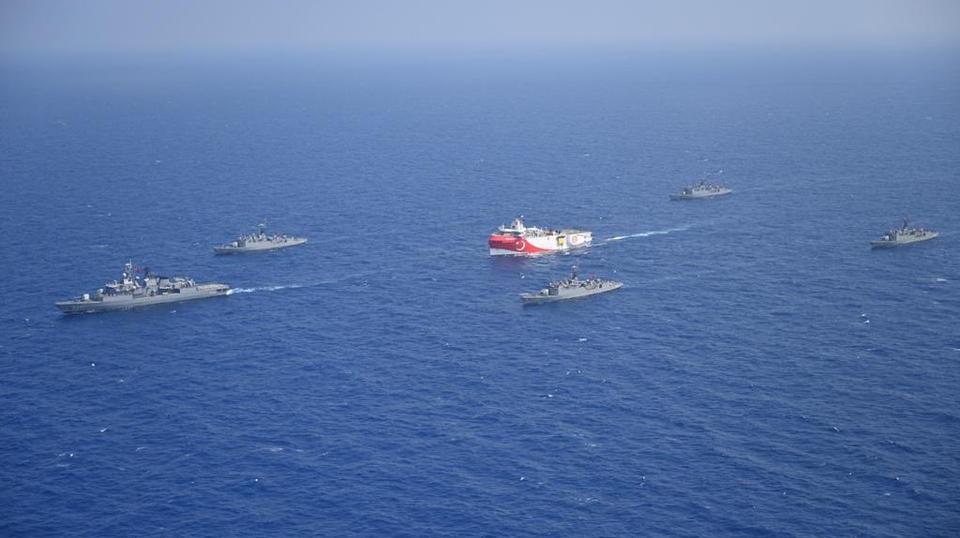 At the moment the crisis in the Eastern Mediterranean (EM) is the most immediate security problem between Turkey and its western allies in NATO and the EU. Even though the crisis is triggered by the discovery of potentially impressive amounts of natural gas in the EM basin, at the core it is a problem of state sovereignty and a technical-political dispute over the maritime border limitations between Turkey and other countries on the coast of the EM. Therefore, the tensions didn’t ease even after the more recent estimates of the economic unviability of the gas drilling projects in the region due to the declining price of natural gas and high costs of drilling. While having the potential of a military escalation, the issue also has legal-technical and political-ideological dimensions as well as repercussions for the domestic politics of the related countries. These dimensions not only escalates the tension but also provides room for manoeuvre and negotiation.

Both Greece and Turkey are pushing for maximalist demands when it comes to their exclusive economic zone (EEZ) declarations. On the one hand, the Turkey-Libya accord on the maritime border delimitations signed in November 2019 violates the international law of the sea as it doesn’t recognize the EEZ of the islands of Crete and Rhodes. Turkish position is based on an unsubstantiated claim that islands do not have a right to the EEZ. On the other hand, Greece is not entirely on the legal side. The Greek claims that the maritime borders between Turkey and Greece should be based on an equidistance line is a maximalist position due to the location of some Greek islands very close to the Turkish mainland. If Greek position is accepted entirely, it would mean that Turkey, a country of 80 million population and having the longest shoreline in the Mediterranean, would receive roughly an equal EEZ with Kastellorizo, a two-kilometre long small Greek island with a population of roughly 500 people. Thus, maximalist positions of both countries leave a way for further negotiations and bargaining.

Current military build-up in the region should be understood as strengthening both countries‘ hands before the negotiations start. While Turkey has a military edge, Greece aims to compensate its military weakness with a series of alliances, most significantly with France.

What makes the current conflict more challenging is that it is interwoven with a series of already existing political conflicts and adds another layer to them. At the center of these problems is the Cyprus question which puts Turkey on a collision course with Greece and the Republic of Cyprus (ROC). Since the Turkish intervention in 1974 the island is de facto divided into two with the northern region being under Turkish military protection and existing as the Turkish Republic of Northern Cyprus (TRNC), a de facto state recognized only by Turkey, while in the southern part ROC, as the de jure owner of the entire island, is an EU member state and also a strong ally of Greece. Turkey objects to the gas explorations around the island as it believes that the Turkish community should also have a stake in the gas discoveries.

This decades-long crisis in the EM is now exacerbated by the Turkish-Egyptian conflict dating back to the ousting of the Muslim Brotherhood government in Egypt through a military coup in 2013, by the Turkish involvement in the Syrian uprising and its failed attempt to overthrow the Assad regime, by the Turkish Israeli conflict due to the latter’s oppression of Palestinians and finally by Turkey’s most recent involvement in Libya where a successful Turkish intervention prevented the fall of the UN recognized GNA government during the early months of 2020 but antagonized the backers of the Renegade General Khalifa Haftar such as France, Egypt and UAE. All these crises now coalesced in the EM gas crisis and put Turkey against a group of rival states.

One of the strongest aspects of the Erdoğan era Turkish foreign policy is the impact of domestic politics. Turkey had been acting increasingly aggressive in foreign affairs and this is partly linked to the increased state capacity and the ambitions of Erdoğan to play a more important regional and global role. However, at least an equally important dimension is that all these never-ending political crises provide ample opportunity in domestic politics as they create a “rally around the flag“ effect. Mastering a policy of brinkmanship, Erdoğan escalates the tensions in the international arena, up to a point where the dangers of the crisis outweigh the benefits. In the meanwhile, the crisis helps him fight the domestic opposition as well. A crisis with Greece is particularly ripe for such an effect and it works both ways; the Greek government is also scoring points at domestic politics.

Role of Nato and EU

Another dimension of the current crisis is its impact on NATO and the EU. Both Greece and Turkey are NATO members, hence the prospect of military conflict within NATO members is a fundamental challenge to the NATO. In fact, NATO was not designed to adjudicate between its members; it was the US that came to the stage, whenever such adjudication was necessary. Most lately in 1995 when once again Turkey and Greece were on the verge of a war due to competing sovereignity claims on an uninhabited small island on the Aegen Sea, it was American mediation that solved the problem. US being increasingly absent from the region, the responsibility falls on the shoulders of the EU.

The crisis is also a litmus test for the EU and it‘s potential to play a more prominent role in global affairs. EM is the EU‘s own backyard, thus a failure to solve a problem here would ultimately undermine the credibility of the EU as a global actor. Therefore from the start of the conflict, the EU took an active role in mediation efforts. However, unlike NATO or the U.S., the EU is a party to the conflict as both Greece and ROC are EU members while Turkey is not. Therefore EU mediation takes the form of supporting Greece and ROC and containing Turkey. However, even that doesn’t provide a deterrence to Turkey as Turkish officials expect that the EU would be unable to take a unified approach. The recent developments confirm the Turkish hypothesis. France unilaterally takes a militaristic and harsh stance aiming for the punishment of Turkey while other member states, particularly Germany, seek a diplomatic solution and prioritizes the de-escalation.

At the time of the writing of this article German position has prevailed. Given that, there is no longer an economic benefit in the near future in view of the declining value of natural gas and increased drilling costs, no party to the conflict has a stake in an immediate escalation. If both parties have scored the “necessary“ points in their domestic politics, we could expect the military crisis to be on the wane and the start of long rounds of negotiations.