Abraham Accord: What’s in the Box for Middle East 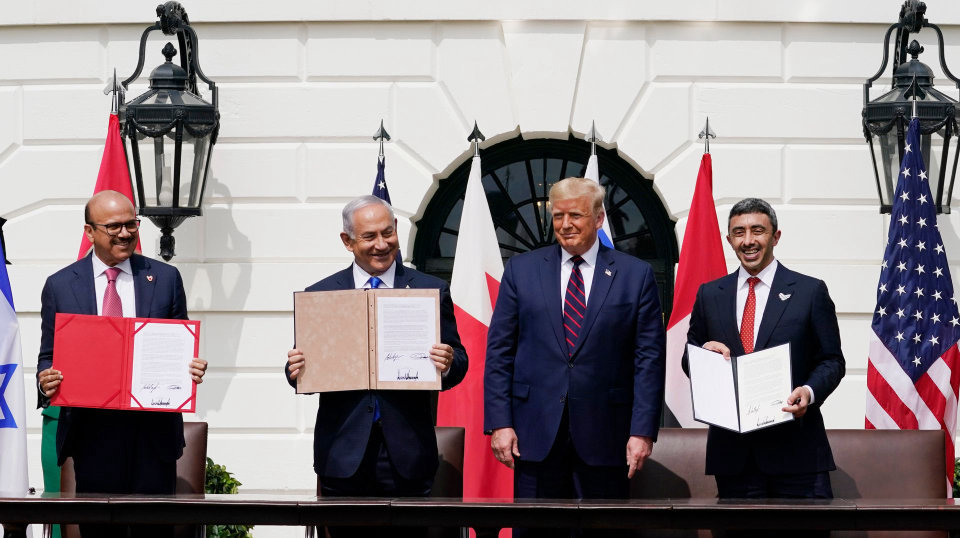 Abraham Accord, named after Abraham, the messenger of God who is credited with being the common patriarch of Abrahamic religion – Christianity, Judaism and Islam, is the catchy term, given to the US-brokered ‘peace agreement’ signed between the United Arab Emirates and Israel on August 13, 2020, aiming at the full normalisation of relations between the two countries. To understand this Deal’s implication for the region, at the very outset, it is important to find answers to the lingering questions like: ‘What actually this Deal is all about? Why it has been signed ‘now’? How it is received on the ground, by the people for whom it is meant, etc.

In essence, this deal is a desperate attempt on the part of the Israel-US combine, to legitimise the illegal claims of Israel among the Arab nations by proffering the claim of ‘normalisation’ and thus sweepingly whitewash Israel’s continued dehumanization of Palestine. Inking this Deal with UAE now is a part of Israel’s vigorous pursuance of the “outside-in” strategy as regards its plan of totally annihilating the Palestinian cause, evidenced by Israel’s sustained history of not just denying the Palestinians their legally justified claims but actually flagrantly flouting all norms of international law unmistakably demonstrated by its naked violation of UN resolutions related to Palestine, many times over. Having realised that the real sufferers of their intransigence, i.e., the Palestinian populace, may never in their life accept the Israeli double-standards, the Israeli strategic community formulated this carefully crafted strategy of, ‘outside-in’,  to negotiate directly with the Arab states; induce them with carrots, possibly cajole where feasible and also wherever possible not shy away from even forcefully coercing too, and after formally winning the Arab states to their side, utilize these won over Arab state’s leverage to influence the Palestinians to agree to the Israeli version of the Peace Plan with respect to the Israel Palestine issue.

The ‘logic of this outside-in’, the perceptive Middle East analyst Ross underlines is that ‘because the Palestinians are so weak and divided – and because there is a new tacit relationship between the Sunni Arab and Israel, there is the hope the Arabs would be prepared to do more’. For Israel, the timings couldn’t be more opportune for this strategy to be effectively realized.  With Trump towards the last lap of his Presidency, urgently in need of some notable feat to showcase as his distinguishing foreign policy achievements and satiate his orthodox constituency and the entire proclaimed Israeli sympathizer’s in key strategic positions in the White House, such theatrics was waiting to be enacted. More so, Netanyahu’s festering governance fiasco enmeshed in the growing anti-corruption rhetoric against him in Israel and Trump’s mishandling of Corona amidst impending election in America, required some optics of this sort, to bail out the sinking electoral ship of both leaders – as was clearly evidenced by the haste with which the Israel – UAE pact was touted as a great breakthrough and historic towards the Middle East peace process. In reality, however, this deal, if has any breakthrough element in it, that will be a ‘breakthrough’ in salvaging the sulking image of two leaders in front of their electorate.  For the Middle-eastern region, this deal has all the pretensions to end up being ‘a disaster’ for the region in the long term because with this Deal, Trump has ‘measurably reduced Israel’s incentive to negotiate what has long been considered the only available just and lasting Middle East Peace settlement – a two-state solution.’ Moreover, by bartering the only available ‘bargaining chip which the Arabs had in terms of their reluctance formalizing full relation with Israel, for almost nothing worthwhile in return. Israel has now got all the more reasons to be much more intransigent.

If there is one truth, which can be culled from the history of successful conflict resolution, it is the negotiation of the terms of the Deal to the satisfaction of the parties for whom it is meant. What lies missing in this so-called historic deal and the numerous discussions evaluating it are – the Palestinians. Though Emirati leadership tried hard to hurriedly portray the Deal as being formalized by the UAE to stop Israeli annexation and thus single-handedly solve the current Israeli-Palestinian crises. Crown Prince Mohammad Zayed al-Nahyan while making the deal public, cautiously tweeted, ‘An agreement was reached to stop further Israeli annexation of Palestinian territories.’ Only after writing this, did he write, ‘the UAE and Israel also agreed to  cooperate and setting a roadmap towards establishing a bilateral relationship.’ However, merely writing this doesn’t achieve anything like the real intent of the Deal couldn’t be concealed for long. The Middle Eastern scholar Yossi Amitav was quite prescient when he fairly highlighted the hollowness of this claim and described the deal as a ‘ Palestine bypass agreement’. It is an agreement that ‘grants legitimacy to the continued oppression of the Palestinians: continue with the occupation and the UAE will grant you normalisation’. Mohammad Zayed bin al-Nahyan’s focal highlight of this Accord is, Netanyahu’s haughty assurance of suspending the new spate of occupation in West Bank for the time being only – no mention of two-state solution, halting of occupation, stopping the settlers’ violence unleashed on indigenous populace, etc, thus disregarding even any semblance of Israel budging from its earlier hardened position, to listen to the long-denied Palestinian concerns. Odeh Bisharat the insightful Arab Israeli columnist was spot on when he thus reminded the UAE: ‘a word to our brothers in Emirates: If you want to normalize relations, please do so. But, why present it as being done for the Palestinians sake’. That is, the reason, ‘peace for peace’, the term with which this Accord is popularly associated with, should in fact give way to Netanyahu’s ‘peace via strength’ remark which, more accurately, captures the essence of the Deal.

Palestinians, for whom the Deal is touted to have been inked for, have been quite critical of the deal since day one. The Palestinian state, described it as ‘ betrayal of Jerusalem, Al Aqsa (mosque), and the Palestinian cause… a disgraceful decision… bartering an illegal annexation suspension for Emirati normalization and using the Palestinian cause as a cover for this purpose.’ Hannan Ashrawi captured this Palestinian echo near perfectly when she remarked,  ‘Please do not do us a favour. We are nobody’s fig leaf.’

This Deal makes a serious dent in the Arab world’s support towards the Palestinian cause, thus possibly carrying the embers to spark the already precarious Middle East inferno. The region stands to lose a lot and further drift away from any foreseeable future solution of the longstanding Israel-Palestine issue. By tinkering with the Arab consensus as was formalized by the 2002 Arab Peace Initiative without any worthwhile giveaway from  Israel, UAE has not just played ‘penny wise, pound foolish’ for herself but has, in fact,  endangered the whole Middle  Eastern region. The 2002 Arab consensus, which had been approved by all Arab states, had earlier strictly placed the following agreed-upon conditions, justifiably so, on Israel for its possible full diplomatic relations with an Islamic nation:

a. that Israel will have to fully withdraw from all the Arab territories occupied since June 1967

b. that Israel will also have to agree to the establishment of a Palestinian state with East Jerusalem as its capital

c. that Israel will have to agree to a just and agreed-upon solution to the Palestinian refugee question

Israel’s inexorably successful defiance of any sign of real intent to negotiate with the genuine Palestinian concerns, leave no scope for any sustained peace in the region. This Accord actually paves the way for further hardening of the resolve of the extremist elements on all sides. The ultimate loser in all this will be the Middle Eastern region. As Mr Bhadrakumar, who had been ambassador to many countries and who keenly keeps track of the region, has rightly remarked uncannily about this Deal brokered by Trump, ‘ … he (Trump) has precipitated a catastrophic miscarriage with fatal consequences… Trump lacks the erudition to comprehend the impact of what he has triggered…’