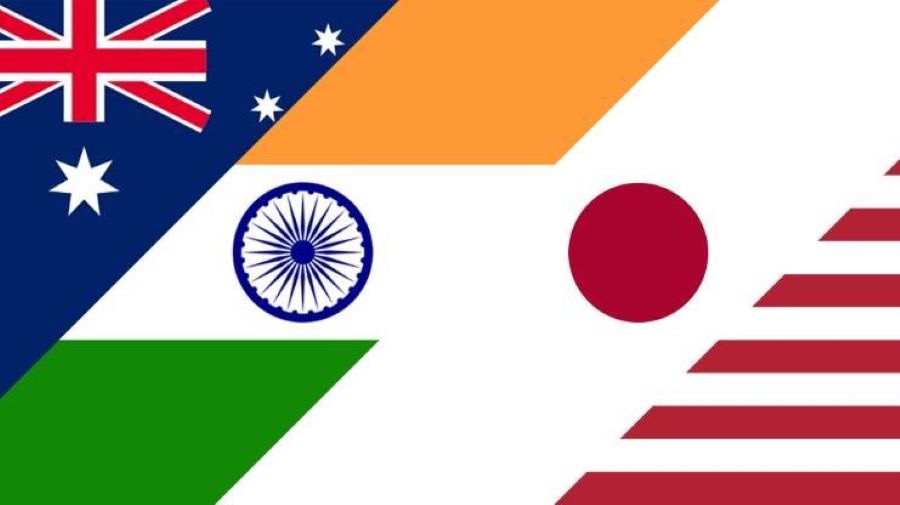 “We live in a world that has walls and those walls need to be guarded by men with guns.”

The Quadrilateral Security Dialogue or the Quad, still in its initial phases since it was first mooted by the then Japanese PM Shinzo Abe in 2007, is an idea deeply rooted in securitising the common security future of the democratic countries viz India, Japan and Australia with the US in the volatile Indo-Pacific region. The common threat to all of them comes from an ever aggrandising, belligerent and irresponsible despotic Beijing with open disregard to a rule-based order in the global commons like the South China Sea (SCS).

India’s strategic thinker KM Panikkar in his pioneering work, ‘India and the Indian Ocean’ in 1945 and the US security expert Robert D Kaplan in his epochal work, ‘Monsoon: The Indian Ocean and the Future of American Power’ in 2010 – both emphasised the ‘pivotal’ strategic significance of this Oceanic region. While Panikkar said that ‘security of the Indian Ocean is the security of the mainland India’, Kaplan called for the Pentagon’s shifting security infrastructure from the Atlantic to the new ‘global pivot’ i.e. Indo-Pacific region. The ‘Quad’ has only acted in putting doctrinal flesh in the Panikkar-Kaplan joint-ideation in the form of a longed ‘Asian-NATO’ against an ‘irredentist’ Red China.

But the ‘Quad diplomacy’ was very quiet till 2017 when after a decade, the Heads of America, Japan, Australia and India (AJAI) met in Manila ahead of the East Asian Summit of the ASEAN to formalise common security mechanisms of the alliance. Between 2017 till September 2020 – about ten meetings of the Quad have been held with India going to host the ‘Quad Plus Security Dialogue’ in 2020 to be joined by Vietnam, New Zealand and South Korea. Doing a ‘SWOT’ analysis of the ‘Quad diplomacy’, without first developing strong bipartisan support for the continuance of the alliance, notwithstanding the change of political parties at government, this Quadrilateral ‘AJAI’ alliance will be akin to a ‘talking shop’ sans being the proverbial ‘Bull in the China shop’. How a ‘pro-China’ regime in Canberra headed by PM Kevin Rudd in 2008 withdrew Australia from Quad or for that matter how then Japanese PM Taro Aso, who succeeded Abe; downplayed the ‘security threat’ from Red China – is a stark reminder as to why a sustainable bipartisan foundation for the ‘Quad’ is a must for being able to ‘walk the talk’.

It will be amateurish to term the Quad axis as merely an anti-China alliance. On the contrary, it is the ever-growing ‘irredentist’ “claims” of Red China in calling the SCS, having overlapping Exclusive Economic Zones (EEZs) as ‘China’s lake’ or converting reefs/islets of SCS as military bases in violation of the UN Convention on Law of the Seas (UNCLOS), to which it is a signatory, that Beijing can only and rightly see the Quad as the slayer of its ‘imperialist dreams’.

Talking about the ‘common security measures’ for India, the Modi Government has signed some ‘gamechanger’ bilateral security cooperation pacts with the US, Australia and Japan, of late. In August 2016 – India and US signed the ‘Logistics Exchange Memorandum of Agreement’ (LEMOA) with the imminent signing of ‘Geospatial Intelligence Pact’ under the ‘Basic Exchange and Cooperation Agreement’ (BECA) in the coming 2+2 Talks. India and Japan on September 10, 2020 – signed the ‘Acquisition and Cross-Servicing Agreement’ (ACSA) for reciprocal provision of supplies, services between their defence forces, in addition to the India-Japan Maritime Security Pact signed in 2018. In June 2020 – India and Australia signed nine pacts under the ‘Comprehensive Strategic Partnership’, including ‘Mutual Logistics Support’ pact for their defence forces. Australia also participated in the ‘Malabar Naval Exercise’ this year with the US, Japan and India.

Apart from signing pacts for common security for interoperability, all three nations viz India, Japan and Australia have also signed a trilateral pact in August, 2020 to build a common ‘supply-chain’, decoupling from China after Beijing’s trade embargo on Canberra. India has already unveiled a ₹ 20 trillion package for building an ‘Aatmanirbhar Bharat’ (Self-reliant India) to progressively reduce trade deficits and subsequently eliminate its dependency on China.

To conclude, the Quad alliance, whom Japan’s outgoing PM Shinzo Abe called as the ‘Democratic Security Diamond’ via working closely with the ASEAN Regional Forum (ARF) and under India’s ‘Act East’ diplomacy is a must for safeguarding maritime order in the broader Indo-Pacific region from Beijing’s creeping territorial occupying designs. India needs to give a ‘seaward’ orientation to its resurgent ‘Act East’ policy by aligning it with Quad geo-strategy. Let it be the leitmotif of India’s ‘containment sans confrontation’ counter-China actionable strategy.