Brexit Deal and Trade Talks with the European Union 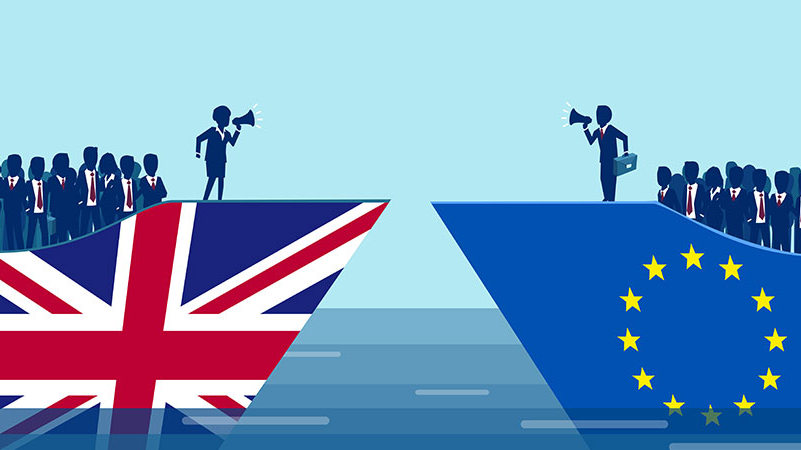 Globally, financial circles and economic scholars cannot help but ponder upon the implications of the phenomena we all know as “Brexit”. A frankenword for the words “Britain” and “Exit”, Brexit simply states the process of Britain’s exit from the European Union (EU). But as simple as the word maybe, its ramifications are prolonged and its dynamics, complex. The idea of Brexit, which was reintroduced to the Brits by former British President David Cameron through the European Union Referendum Act in 2015, a little over 40 years after it was initially discussed, was meant to tackle certain issues the United Kingdom as a country faced in its membership with the European Union. A referendum was conducted the next year, and approximately 52.5% of Britain’s population voted for the country to leave the EU. Since then, the EU and the UK have been in talks on a possible trade deal and the future of the EU-UK relations.

A Brief Understanding of the “Brexit Deal”

The Brexit, after years of negotiation and discussion, happened on the 31st of January, 2020. Incumbent Prime Minister of the United Kingdom (UK), Boris Johnson campaigned during the 2019 elections on “Making Brexit happen”. His predecessor, Theresa May, was unsuccessful in doing so primarily because the Members of UK Parliament under her rejected the Brexit deal formulated by May three times, primarily on the issue of the Irish backstop (those who rejected it were concerned that if the Irish backstop is maintained, Northern Ireland would have open borders, essentially keeping it part of EU’s single market system, and this would impinge upon Britain’s sovereignty). For a clear reference, it must be understood that a Brexit deal needed two parts: a “Withdrawal Agreement” or “Divorce Bill”, discussing the conditions of UK’s Withdrawal from the EU (such as the rights of the EU citizens living in the UK and the control of border checks along Ireland), and the “Future Deal”, which outlines the future of the EU-UK relations, including trade (the talks regarding which were to begin after Brexit itself took place). Boris Johnson had clearly stated that the “Backstop is dead”, but it was only later, when he negotiated a new customs agreement leading to some openness on the Irish border, that his negotiations and his deal became successful.

Once UK’s withdrawal from the EU gained success this year, the “transition period” of the deal, which is a period of 11 months for the two entities to negotiate a new trade deal, began. The transition period is set to be completed on 31 December, 2020, and the deadline for its extension, which was in July, has passed as well. In the transition period, however, UK continues to function in accordance with EU norms on customs and the single market. The world now has its eyes set on how Britain exits the transition period itself – will it do so with a deal or no deal? In case of the former, what will be the nature and the course of EU-UK relations? Only time can answer these questions. Of course, one must know that if there is no-deal, all formal EU-UK alliances come to an end.

Economists around the world have somewhat come to an agreement that UK’s withdrawal from the EU has certain middle and long term ill-effects for UK’s economic and political prosperity. Before understanding what options both UK and the EU have for their future deal, we must understand why the UK has been so persistent in making Brexit happen.

To begin with, Britain has been the second-largest contributor of funds to the European Central Bank, and to the functioning of the European Commission, especially when another EU country needed the money to pay their debts (examples include Greece, Spain and Italy). It was estimated that in 2016 alone, UK was paying to the EU, a sum of £252 million per week. This also led to the Red Bus controversy, wherein a UK Red Bus, passing Boris Johnson, quoted “We send the EU £350 million a week, let’s fund our NHS [National Health Service] instead,” which was a people’s call for the government to spend more on national public health services. Moreover, the UK, like all other countries, paid a membership fee to the EU per year, which added to its expenses. The intermingled concepts of immigration and sovereignty are important too. For quite some time, UK felt its needs were being overwhelmed by EU Law, as in the case of immigration – when an influx of immigrants enters the EU, it reaches UK as well, primarily due to the concept of “open borders” or “single market” (which means that from commodities to people, all are exempted from border checks among EU countries). However, this compromised UK’s sovereign borders as the EU condemned forced repatriation and mandated that all foreign immigrants be given home. The same can be observed in UK’s membership of the European Court of Human Rights, which had the capacity to legislate a contracting state (including UK) for crimes against Human Rights – something which didn’t fascinate UK. Among others, these factors gave an impetus to UK’s plea for Brexit.

Now to revive itself from these impositions, UK can negotiate a deal in multiple ways, while maintaining relations of a certain nature with the EU. It can remain part of the EU’s Customs Union and/ or the EU Single Market. In the former, UK shall be free of custom duties and tariffs while exporting goods to other countries part of the Custom Union, and can choose to do the same for imports as well. In the latter, it shall have to provide open borders for immigration as well. If UK chooses to be part of either of these, it will emerge out of the withdrawal period with a “Soft-deal”. On the other hand, UK can opt-out of the relationship completely, and sign a Free Trade Agreement (FTA) with the European Union, or carry out trade under the same norms as those laid down by the World Trade Organisation (WTO). EU’s Chief Negotiator on Brexit, Michel Barnier has stated that the EU shall accept UK’s membership of the Customs Union as a whole (as in, the Great Britain and Northern Ireland), preserving its territorial integrity. However, for that purpose, UK cannot back out of the Irish backstop.

On the question of this backstop, there are growing contentions between the UK and the North Ireland Democratic Unionist Party. If the former chooses to stay in the Customs Union, some border checks will be implemented along the Irish Sea, which is a point of contention for the latter. The Northern Ireland border is the connecting point between the EU and the UK, and the post-Brexit talks, largely governed by their uncertainties, leave the border question unanswered. Of course, if UK leaves without a deal, then cross-border trade will be much harder since at that point, the UK will have the privilege to reintroduce customs and regulations on the Irish border.

Brexit will have impact on the British economy, as one can already witness. The Brexit referendum alone led to uncertainties among businesses, investors and brokers, causing the UK economic growth to dip by 0.6-1.3%, as quoted by Financial Times (December 21, 2017). These uncertainties have already led to distrust among investors, which has the capacity to significantly lower Britain’s Foreign Direct Investment inflows. In 2013, 46% of the stock of FDI that came to UK was accredited to its EU membership. Therefore, there is a need for UK to undertake schemes that directly invite FDI into the country for various industries, especially in vehicles, industrial machinery and pharmaceutical products, which comprised of some of the largest imports of UK from the EU in 2019 alone. There is also a need for UK to generate new employment opportunities while enhancing its “Ease of Doing Business”, primarily since the uncertainties for pursuing business in the UK has led companies to withdraw from, downsize or lay-off employees in the country. These include corporate giants such as Barclays, Merrill Lynch and Airbus, among many others.

The advantage of dominating EU’s single-market is no longer available to the UK. In this context, UK must seek stronger trade and business alliances with various other countries in the world, as can be seen in the case of its association with Japan, primarily through 2018 Free Trade Agreement (FTA) signed by the two nations. Japan’s membership in the Comprehensive and Progressive Agreement for Trans-Pacific Partnership (CPTPP), and its endeavours in looking for more members for the CPTPP post-United States-withdrawal from the partnership, can be an opportunity for UK to be part of, and benefit from newer trading systems in the increasingly important Asia Pacific region.

It is highly suggested for UK and the EU to forge formal trading alliances which provide for some openness and slack in customs and regulations because a soft Brexit will be economically recuperative for both entities since even the EU has been highly dependent on the UK for both, funds and commodities (in 2019 alone, EU’s imports from the UK amounted to £300 billion). UK must also take this opportunity to negotiate bilateral agreements with other EU countries, for the sake of a smooth transition in its trading and economic prospects, and for the protection of British people inhabiting other EU countries. Most importantly, UK must fulfil the trust deficit its exit has created, by creating opportunities for investment, immigration, employment and cooperation, with both, the state parties and private entities. The varied implications of the Brexit make it a complex process, and certainly, one that will take many years to unfold in its entirety – therefore, both time and money are of the essence. The more Britain is able to negotiate in terms of freedom of trade, and openness of the Irish border, the better it will be for the country itself, and for its EU partners, in the long run.

Anushka Saxena
Author is a Foreign Policy and International Affairs enthusiast, and her areas of expertise include China studies and Maritime Geopolitics. She is working as a Researcher with the Neighbourhood Studies Centre at the Nepal Institute of International Cooperation and Engagement, and as a Research Supervisor at Alexis Group. She is a student of History at Lady Shri Ram College for Women, Delhi University.
Tags:
Deal trade BREXIT UK EU Britain European Union Trade Deal Trade Talks Referendum FTA
Share:
Share this...