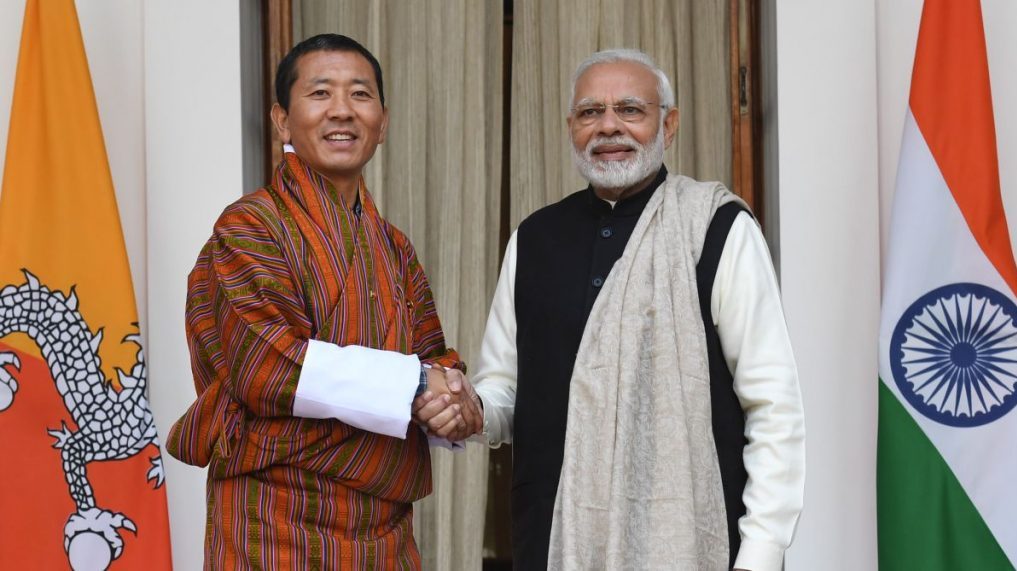 After inviting SAARC leaders to his swearing-in ceremony in 2014, Indian Prime Minister, Modi, signalled New Delhi’s commitment towards an integrated and stable South Asian region. To revise the course of relations in the region, the new government framed a ‘Neighbourhood First Policy’ to strengthen cross-border relations and foster regional connectivity. Despite New Delhi’s initiation of the ‘Neighbourhood First Policy’—India’s relations with most of its neighbouring countries are under strain. China’s increased strategic and soft-power overtures in the South Asian region to gain influence has raised considerable concern amongst the Indian policymakers. However, Bhutan of all the countries in the region remains one of the most significant nations that have stood the test of time and share a unique relationship with India. As India and Bhutan mark their 71st anniversary to the signing of the landmark ‘Treaty of Perpetual Peace and Friendship’ on August 8 this year (later re-negotiated in 2007), it is important to map the enduring and mutually beneficial bilateral relationship shared between the two states.

Declaring Indian foreign policy priorities in the neighbourhood, PM, Narendra Modi, chose Bhutan as his first country of foreign visit as the Indian premier. Calling it as a ‘natural choice’; PM Modi stressed on the ‘unique’ and ‘special’ relationship shared between India and Bhutan. The relations with Bhutan were considered unique as both the countries share a deep historical, cultural and spiritual linkage which dates back to the 8th century when the great Indian saint, Swami Padmasambhava, popularly known as Second Buddha or Rinpoche, traveled to Bhutan and introduced Buddhism in the country, which since then has pervaded all aspects of Bhutan’s life.

India and Bhutan have shared a special relationship since the 1950s. Though the basic framework of India-Bhutan bilateral relations was laid down in the ‘Treaty of Perpetual Peace and Friendship’ signed in 1949, the diplomatic relations between India and Bhutan were established in 1968. Since then Indian diplomacy has enabled deep economic, cultural, and political ties with Bhutan. From extending financial assistance to Bhutan’s five-year plans and making an investment in the hydropower projects to becoming the largest trading partner of Bhutan and supporting its smooth transition to democracy, India has become Bhutan’s largest development partner. While assisting in the development of the Himalayan state, the Indian state, in turn, has benefitted enormously from Bhutan’s hydropower capability-enjoying a mutually beneficial partnership.

India’s pursuit of its foreign policy under PM Modi has proactively shifted its emphasis on promoting India’s soft power as a means to carry and build deeper foreign relations. Though Indian art, culture, and rich spiritual heritage has been an attraction around the world, the BJP government’s addition of the principle of ‘Panchamrit’ comprising of five themes: dignity, dialogue, shared prosperity, regional and global security and cultural and civilisational links, has paved way for new pillars of India’s foreign policy architecture.

India’s relations with the Himalayan State of Bhutan is underpinned by the state’s rich heritage manifested in its political values and culture. In the two official visits to Bhutan, Indian PM Modi highlighted the rich history of cultural and spiritual ties shared between India and Bhutan and emphasised on deepening people to people contact. India’s centrality to the Buddhist thought has helped the Indian state lay down a strong foundation in their relations with Bhutan. For instance, in one of his speeches at United Nations General Assembly, PM Modi provided an aphorism of ‘Buddh’ and not ‘Yuddh’ to project India’s commitment to peace instead of war and have explicitly claimed that “without Buddha, this century cannot be Asia’s century.”

With India’s centrality to Buddhist thought, Bhutan considers the “shared spiritual heritage between the two states as an unchanging constant in their old age-relationship and compliments India for their greatest gift of Buddhism to its people.” The deep cultural and religious connection enjoyed by the two states has led to vibrant cultural exchanges that include events such as the celebration of Bhutan week in India, visits of pilgrims to Buddhist sites in both countries, and organization of conferences on Buddhism.

Another major facet of cultural bonding between India and Bhutan is rooted in the ancient practice of Yoga. Yoga, an ancient mental, physical, and spiritual practice that originated in India, has gained great popularity among the Bhutanese. Bhutan, which stresses on Gross National Happiness to measure collective happiness and well-being of its population finds in yoga, immense spiritual strength to combat pain, suffering, and stresses of modern-day life. Considered as a peaceful harmony of the mind and body, the practice has gained great acceptance among the Bhutanese.

The shared heritage of Buddhism has helped the two states not only connect better but deepen their relationship based on humanitarian grounds. Drawing from the ancient cultural and civilisational philosophy of ‘Vasudhaiva Kutumbakam’-seeing the world as one family, Indian PM Modi extends the pursuits of its relations with the Himalayan country based on the principles of integration and unity. Exemplifying the principle in real practice is seen in the role played by India in extending continuous technical assistance and providing essential medical supplies to Bhutan in managing the present Covid-19 pandemic.

Guided by the value of shared prosperity rooted in the ‘Bharat to Bhutan’ (B2B) vision, the Indian state located the real source of power and energy of the relationship between the two states in the people and extended the partnership beyond the traditional sectors of cooperation to new frontiers. Calling the two countries as ‘natural partners’ the Indian government’s decision to deepen people to people ties, especially among the youth in Bhutan, were driven by the intention of meeting the aspirational needs of the youth in the country, bridging the information gap to build trust and mutual understanding and to facilitate collaboration to find innovative solutions to challenging problems that have a direct impact on the life of young minds.

To nurture the enduring relationship between India and Bhutan, the Indian state emphasised the value of capacity-building and decided to extend and diversify the collaboration to new fields such as education, space research, information technology, digital payments, disaster management, and others. Envisaging a seamlessly integrated world, the Indian government stressed on building strong links and an information highway among people for which the two Prime Ministers have recently established cooperation between India’s National knowledge network and Bhutan’s Druk Research and education network.

Drawing from the ancient heritage, education and learning have been central to the ties between India and Bhutan. India remains the most popular destination for Bhutanese students as 4000 students are enrolled in Indian universities. Moreover, to facilitate skill-based employment opportunities for the youth in Bhutan, the two governments have signed 4 MoUs on the enhancement of Academic exchanges and STEM cooperation, offering Bhutanese students admissions and scholarships to M.Tech programs in Indian premier universities such as IITs. Most recently, the government of India has started to offer special dispensation to students from Bhutan to facilitate their enrolments in reputed institutions such as St. Stephens College, University of Delhi, and AIIMS based on nomination and recommendation by the MEA and Royal Government of Bhutan.

To bolster educational exchanges, the two countries have also signed an MoU in January 2020, to extend the prestigious Nehru-Wangchuck scholarship scheme for another five years. Further deepening the price-less spiritual heritage and bond of learning, the Indian government welcomes students of Buddhism from Bhutan to the much-celebrated centre of Buddhist learning in India, the Nalanda University.

Moreover, exhorting the Bhutanese youth to keep pace with technological innovation, India extended its collaboration in the areas of space along with digital and emerging technologies. Forging cooperation in the space domain, PM Modi inaugurated the Thimphu Ground Station built by ISRO  and also welcomed the participation of young Bhutanese scientists to India to work on designing and launching Bhutan’s small satellite. Expanding Bhutan’s digital footprint through an e-library portal, India played a significant role in making education accessible for students across the Himalayan Kingdom. Furthermore, the launch of Ru-Pay card and Bhutan’s QR Code payment are likely to strengthen fintech cooperation between the two countries by ensuring a more convenient, secure and low-cost cross border QR code payments

To ascertain greater connectivity among the youth who are to serve as future diplomats and policy-makers, the two states also encourage Annual youth summits to promote a better understanding of the two countries and the aspirations of its citizens. Whereas, events such as the India-Bhutan start-up summit help forge stronger future business engagement and enhance cooperation between the business communities.

Thus, over the years, India and Bhutan have demonstrated an exemplary journey of friendship and mutual benefits. The ‘Bharat to Bhutan’ vision envisaged by PM Modi during his first foreign visit to Bhutan, a part of New Delhi’s broader neighbourhood policy of ‘Sabka Saath, Sabka Vikas, Sabka Vishwaas’ shows India’s vision of a prosperous neighbourhood, which not only helps serve its national interests but fulfil the commitment of assisting the development of other states based on the principles of inclusivity and unity.

Dr. Shivani Sharma
Author is a PhD holder from the Centre for South Asian Studies, School of International Studies, Jawaharlal Nehru University. She is a research fellow at South Asia Democratic Forum, a think-tank based out of Belgium. She has previously taught at the Hindu College and Indraprastha College for Women, University of Delhi.
Tags:
Diplomacy Panchamrit Capacity-building People to people ties STEM cooperation India Buddhism
Share:
Share this...