India’s Upcoming G-20 Presidency in 2022: In Search of a New World Order 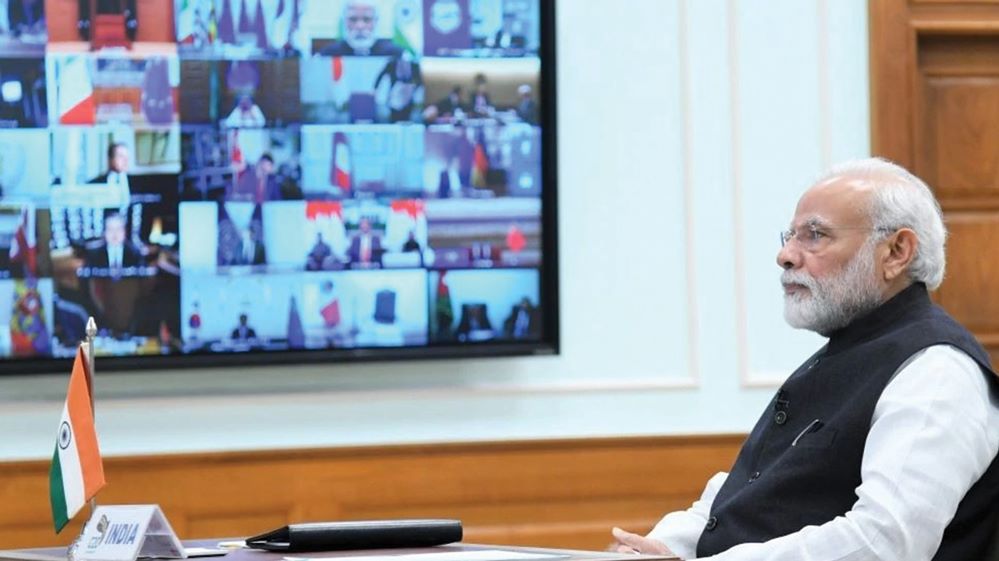 The world is simultaneously dealing with an unprecedented pandemic; a disruption of neo-liberal world order with its leader USA retreating under Trump; an aggressive and an assiduously enigmatic China in borders and sea; a return of Great Power rivalry; global economic recession; an unprecedented rise of right-wing populism across the board; a pervasive frustration with globalization and a return of the “nation-state”; and a fervent anti- China sentiment. This definitely seems like a barrage of intertwined factors, a mumbo jumbo of world order. But so be it. Chaos has always preceded a new order.

Firstly, while India is criticized, and at times rightly so, for not aligning enough with the US in a world increasingly getting marked with great power rivalry, maximization of capabilities and camps; it is also appreciated for its penchant and commitment to multilateral institutions like the WHO, the IMF and the G-20. Secondly, in a world bitten by the anti-China bug, the G-20 presidency definitely opens up new avenues for India to deliver responsible and sustainable economic leadership and offset the influence of its arch-rival China.

It is important to mention the WHO because while Trump has made the US withdraw from there, India looks in a good position to usurp the space thus created and wield better influence. PM Modi, at the Extraordinary summit, stressed “the need to put human beings at the centre of our vision of global prosperity and coordination” as well as the reform of WHO.  Early this year, India’s Sowmya Swaminathan has been appointed as the Chief Scientist and Dr Harsh Vardhan gets elected to chair the WHO executive board that would come in effect from 2021. At the same platform, PM Modi had also called for a commitment to “humanitarian” values, a sentiment widely upheld world over.

All of this together provides India’s with the opportunity to prove its oft-quoted commitment to multilateralism amidst a parallel return of the selfish national interest and populism.

Amidst recurrent furor of multilateral organizations losing their relevance due to the sharp return to upholding national interest, what sets the G20 apart from other organizations is its origins as a rapid-response, crisis-management group and its unique size and flexible structure (referring to the post-2008 glory), which makes it a particularly well-suited platform to take on Global Commons like the economic and the human cost of the pandemic that we all face today.

Hence, when it comes to problems that can be addressed only cooperatively at the global level, there is no alternative to bodies like the G20 given the total percentage of global trade, global wealth and a global population that the G-20 club represents. It emerges as the best tool and apparatus for effective global governance in our times.

G-20 is especially important because it provides India, a developing populous country, with an opportunity to display its global, political, economic and intellectual leadership on the same platform with the world’s most powerful countries.

As trade tensions escalate among major powers and global growth decelerates, the G-20 countries will find it hard to present a common framework to tackle global challenges.  Ensuring a smooth ride back to normalcy for economies marred by the lockdown hibernation will be tough to nail and necessitates India catering to its own economic woes first. It shall be expected of India to develop coordinated action in line with the Extraordinary Summit where an unflinching commitment to address the issue of debt vulnerability resulted in the issuing of the joint communiqué for debt freeze alongside IMF setting up a catastrophe containment and relief trust for the same. The challenge facing India then is twofold, that of taking on the massive task mentioned above and setting its own economy back on a recovery path.

According to Moody’s, the Indian economy is likely to be in a freeze this year, with recovery picking up only by the end of the second quarter of 2020 given that additional stimulus packages are announced. The government’s Rs 1.7 lakh crore stimulus package has been called “modest compared with support packages implemented in many other countries, particularly given the breadth of India’s nationwide lockdown measures.” However, the good news is that they also predict that the Indian economy is likely to bounce back at 2%-2.5% in FY2021 and 6% in FY2022 if necessary measures are taken.

The role of the Reserve Bank of India

There has been consternation regarding RBI’s decision to not cut down interest rates to boost the economy when most professional forecasters expect the Indian economy to contract between 5% and 6% in the current financial year. Further, there is compelling evidence that the RBI may continue to not cut the interest rates even in October. However, closer analysis shows that this might check retail inflation if and only if RBI also makes the banks reduce their lending interest rates to the people commensurably enough.

In other words, the onus of reviving the manufacturing sector and through it- employment and the national economy at large lies solely in the hands of the central leadership. The decisions they take now are going to significantly impact the outcomes of FY2021 and FY2022 when India will be hosting the G-20 in New Delhi.

The RBI, in view of the coronavirus pandemic, has deferred the implementation of Basel-III norms for banking services by a year till January 1, 2023 which were scheduled to come into effect from January 1, 2022. This would provide a breathing space and additional operational capacity for banks and supervisors to respond to the immediate financial stability priorities resulting from the impact of the Covid 19 on the global banking system.

If PM Modi has called for strengthening international organizations, it requires India to encourage deep inter-disciplinary research on issues of the international monetary system, global financial architecture, global trading system and trade wars, and the shared commitment to global climate and sustainability.  The upcoming G-20 presidency in 2022 calls for a robust intellectual environment of analyzing expectations and outcomes at such mega multilateral platforms much ahead of the actual event. In order to deliver well at this task – there has to be foresight, coordination among the finance ministry, the foreign ministry and the special appointee such as G20 Sherpa, which together act as the secretariat to the G20 Presidency all under a clear-sighted and unwavering central leadership.

Populism and eroding of democratic institutions

Lastly, all of the above has to be done by protecting the democratic institutions within India. The polarization happening at the societal level as a result of right-wing populism is not a healthy sign for the future health of the secular ethos of India.  India must put its own house in order.

The nation-state, often backed by populism, has been strengthened because of its powers in healthcare, border control and stimulus plans.  But this does not mean a lesser role for multilateral initiatives like the G-20 and India’s presidency in 2022 is likely to come out with flying colors if the challenges are tackled well in advance.