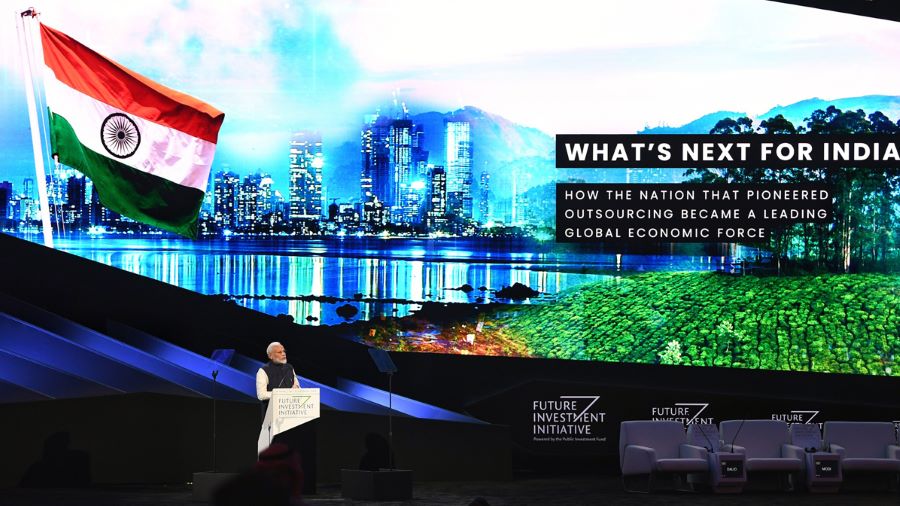 The “Look West” policy assumed significance and focussed attention in India’s policy approach with Prime Minister Modi’s remarks at the ‘Make in India’ conference in New Delhi on 26th  September, 2014, when he said, “For a long time Look East policy is under discussion, I would like to talk about Link West”. Thenceforth, Indian policy and diplomatic outreach has put the region into a policy priority and the “Look West” policy became a bright spot on Indian policy pursuit and a multi-layered engagement began.

The strategic location of the Middle East and India’s multiple linkages from the past to the present make it immensely important for India’s pursuit of power. The previous government’s policies have been limited to energy security owing to intractable political fault lines and fractured socio-religious landscape in the region – like Arab-Israel contest and Iran-Saudi rivalry. The region has been the vital area of great power competition and conflicts and at the current juncture, it is characterised by a cocktail of the political rivalry of the regional powers, spiralling conflicts and unending violence with Arab Spring, terrorism and proxy wars. The absence of any regional organization with a pragmatic inclusive goal is further worsening the situation in this vital region.

The new emphasis of the “Look West” policy of India is a bold plunge with one and all in the region from the point of view of India’s national interests and strategic vision. The turbulence in the region, in a way, is an opportunity to build relations on fresh visions without taking sides in their areas of differences and rivalry. We need not choose between Arab and Israel or between Saudi Arabia and Iran. India needs to capitalise on its own peerless soft power and the strength of its huge diaspora in the region. Only the Gulf region hosts a huge portion of Indian diaspora of around 9 million who account for huge remittances. This vast diaspora forms the backbone of economies of the region. The recent visits by Prime Minister Narendra Modi and the number of warm responses in those countries have made the region an extended arm of India. Prime Minister Modi has personally interacted with most of the leaders of the Gulf on a collaborative and mutually coordinated strategy on issues of economic engagement and infrastructure development.

The current outreach is sure to re-establish India as a paramount force of stability and prosperity in the region. The GCC has already been the largest trading partner of India and the economic mutuality is on the ascending mode. Major oil companies of the region, ARAMCO (Saudi Arabia) and ANDOC (UAE) are developing strategic partnerships with the Indian companies both in the public and private sectors. The pattern of economic interdependence has gained a substantial boost with the presence of Prime Minister Modi in the ‘Davos in the Desert’ event. The economic diversification drive in the region, mainly in the Gulf is in sync with India’s vision of Five trillion economy with mutually beneficial and reinforcing engagements. Saudi Arabia is set to invest $100 billion in India in the areas of energy, refining, petrochemicals, infrastructure, agriculture, minerals and mining, etc. Saudi Arabia’s sovereign fund has decided recently to invest $1.5 billion in the Jio platform of Reliance Industries. A potential fear of Chinese dominance and monopolistic pursuit is at loggerheads with the vision of economic diversification of these countries which don’t want to be a mere destination of satisfaction of Chinese energy requirements and dump yard of Chinese products.

Iran sits at the geographical and strategic centre of this vital region. It is immensely important for the security of the Indian Ocean, the stability of the Gulf and its oil supply and India’s Afghanistan policy and Central Asian vision. Iran is a strategic partner of India and the 2016 Trilateral agreement (India, Iran and Afghanistan) on  Chabahar port complex which is a strategic hub and crucial chain in India’s Afghan policy and beyond- the Central Asian countries. This position enables India to bypass Pakistan and to cap, prevent both Pakistan and China to have uninterrupted access to the Gulf. Thus, the deal is a crucial step of neighbourhood policy vision which ensures India a significant edge over its competitor in the changing geopolitical landscape in the region. The recent news of the Chinese Comprehensive Strategic Partnership with Iran can create a strategic discomfort to the Indian vision of Look West Policy. But a sustained engagement of India will maintain its position of strategic advantage. The new development that Iran has started the Chabahar-Zahedan railway projects is owing to its domestic political compulsions as it wants to complete it before the Presidential election due next year. The ambiguity of US sanctions regarding the project is due to the US election and its concerning domestic politics, the factor of delays on the part of India. Once the geopolitical situation stabilises by the end of the year, India will join the project later on. Meanwhile, Iran has expressed commitment to the common vision and partnership with India for peace, sustainable development and economic integration in the region.

Indian policy has demonstrated a marked transformation of its policy choices in the region. The Israel policy and the growing strategic proximity and security cooperation is the perceptible success of the new vision and pursuit of the “Look West” policy as it has managed this bold pragmatic step without compromising its commitment to the Palestine issue. This new diplomatic balance was proved with India’s voting with Palestine against the US recognition of Jerusalem as the capital of Israel in the United Nations and maintaining unabated momentum of India-Israel partnership.

The most remarkable outcome of the “Look West” policy and dense diplomatic outreach of Prime Minister Modi in the region has been the perception of OIC, 57 member organization of the Muslim world. OIC summit invitation to India and participation of the then External Affairs Minister of India, Smt Sushma Swaraj in Abu Dhabi is the most successful outcome of the Indian “Look West” policy in the region as Pakistan has failed to influence the forum against India. Pakistan failed again to make OIC condemn the Indian government’s revoking the special status of Jammu and Kashmir under Article 370. Last week once again Pakistan asked for OIC foreign Ministers Meeting on Kashmir but has not been heeded by the organization, a marked victory of India’s policies, outreach and engagement in the region.

In brief, the “Look West” policy has perceptibly changed India’s position as a credible partner in the region. The policy has been successful across multiple rivalries of the region- Saudi Arabia and Iran, Turkey and Egypt, Qatar and UAE and Israel and Palestine with diplomatic acumen and sustained strategic prudence. The “Abraham Accord” announced on 13th August, 2020 between the two allies- Israel and UAE is an endorsement for the balanced “Look West” policy of India for peace and stability in the region. US strategic shift to Indo-pacific and growing Chinese expansion in the region has created a new Great power competition in the region. India needs to pursue the path of Multilateralism with sustained rounds of diplomatic outreach to the favourable social and political constituencies in the region and prudently use the leverages with Russia and USA to position itself as a credible power in the region in the emerging Asian Century World Order.