Diplomatist > Development Partnerships > Home Featured > Expanding G7: What does it mean for India?

Expanding G7: What does it mean for India? 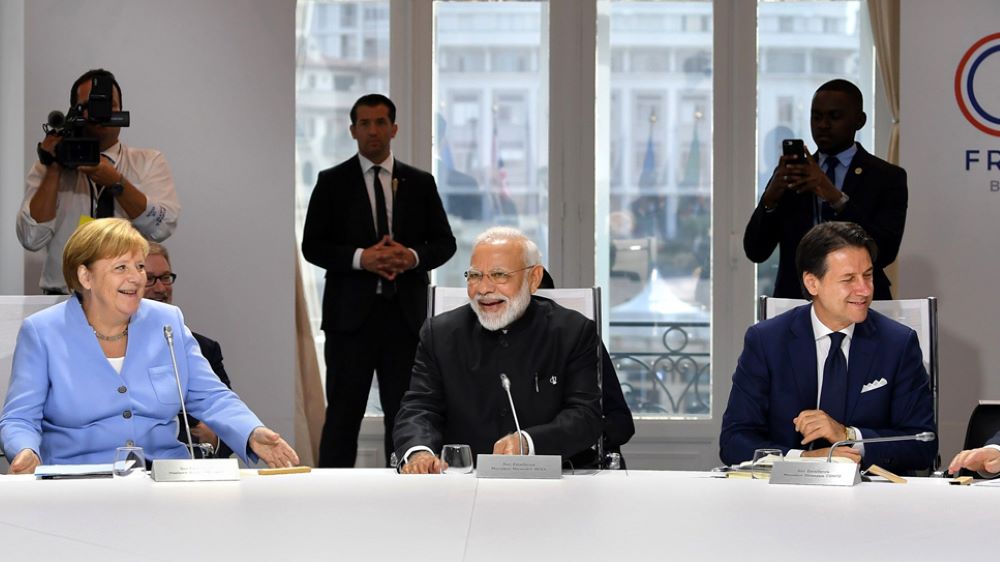 Recently US President Donald Trump announced to postpone the G7 summit to September calling the G7 as a ‘group of outdated countries’ and decided to expand the grouping with liberal democracies like Australia, India, South Korea and Russia. Later on in a phone conversation with Indian PM Narendra Modi, Trump invited India to participate in the next G7 summit to be hosted by the United States. India has attended several G7 summits previously, but Trump’s invitation to the 2020 summit and his remarks on expanding G7 bring about ample opportunities and challenges before New Delhi in strategic, political and economic realms.

The inclusion of emerging economies like India will strengthen the grouping, which loosened after Russia’s removal in 2014. Anyhow, the structure will remain incomplete, owing to the exclusion of China, which is the second-largest economy in the world. However, the extended G7 will help India to improve its relations with advanced economies and can attract more investments in the future.

The G7 is a group of elite advanced economies formed as a response to the embargo imposed by OAPEC (Organization of Arab Petroleum Exporting Countries) on the United States, Japan, Canada and Netherlands lead for causing the 1973 oil crisis. This crisis shackled the western economies due to their over-reliance on the Middle East for oil supplies. As a response in 1975, France invited the UK, US, Japan, Italy, Germany for a formal arrangement of developed economies to redesign the world order. This grouping became G7 when Canada joined the organization in 1976. With Russia’s inclusion in 1998, the grouping was termed as G8 till 2014. In 2014, Russia was expelled from the forum due to its seizure of Crimea from Ukraine.

The G7 does not have a formal headquarters or constitution, and the decisions taken by the grouping are non-binding on members. Each member country will host the summits on a rotational basis, and the host country can invite special guests upon their discretion. Over the years, the group discussed global issues of varying degrees, from the financial crises and economic matters to arms control and terrorism.

Beyond the global realities

When initiated in 1975, G7 combinedly had two-third of the world’s GDP. The world witnessed a power shift from bipolarity to unipolarity and subsequently to multipolarity later. These changes hardly affected the G7 and questioned their relevance with the emergence of new economic giants like Brazil, India, China and South Africa. The benign neglect of G7 in controlling the 2007-08 global financial crisis substantiated the inability of the forum in containing issues of international importance. This vacuum was filled by the emergence of G20 as a proactive actor to coordinate global responses, to mitigate the threats posed by the economic crisis. Till the formation of G20, it has been acting as an authority to conduct deliberations on fixing the global economic agenda.

Apart from inaction, G7 is becoming a troubled forum created by the inconsistent actions of the United States to promote their raison d ‘être over other members. While taking examples of G7 summits from 2018 to 2020, it is evident by the fact that the failure of the forum in producing collective voices on contested issues. The 2018 G7 summit held in Quebec, Canada failed to establish a joint communique after Trump refused to endorse the document. Trump retracted from the joint statement which intended for ensuring an anti-protectionist, fair, free and mutually beneficial trade. In the next year, the G7 summit (2019) held in France also witnessed a gathering without a joint communique due to differences raised by Trump.

Trump’s call for expanding G7 is the need of the hour. In 1975, G7 accounted for a significant chunk of the world economy, which became irrelevant due to the emergence of new actors in the international scene. For India, a seat in an extended G7 will be valuable in the context of escalating border tensions with China.

There are mainly three reasons why India should actively engage with extended G7. First, The current setting doesn’t represent the realities of the globe as a whole. The extension will add more value to the organization strategically and economically. It’s an opportunity for a country like India to develop cordial relations with developed countries. This inclusion will magnify India’s voices in International organizations, and it will strengthen the Indian campaign for its candidature in the UN security council.

Second, it will boost security cooperation with member countries in Indo-Pacific, particularly the Indian ocean. Third, the extended G7 will act as a credible forum of democracies for free and rules-based world order. Altogether the new version of G7 accounts for more than 50% of world GDP and subsequently will challenge China. Beijing currently has ongoing disputes with India, Japan, Philippines, Vietnam and Bhutan. All these tensions escalated in the COVID-19 era signifying PRC’s thought process to use the pandemic as a catalyst for territorial expansion.

Even though Trump proposed expansion for the organization, it remains as a far-reaching dream. Germany, the UK and Canada openly opposed Trump’s proposal for reinstating Russian membership in the organization.

Conversely, there are multiple reasons for India to take care of it while joining the forum. Primarily India is also a member of the G20, a grouping dedicated to fixing the Global Economic agenda. The relevance of G7 with G20 is debated because there are convergences in their areas of activism.

The second main reason is isolating Russia and China in the future. Three members of G7 already gave clear statements about not to include Russia. Moreover, the primary intention of the US to extend G7 is to contain China. Contextualizing this, both Russia and China have significant trade ties with India. Russia is India’s largest arms supplier accounting for 58% of India’s defence exports. A membership in extended G7 will invite unnecessary low in relations to India with both China and Russia.

Finally, the US hegemony in the grouping is visible from different summits. The US withdrawal from different multilateral agreements affected the stability of the organization. The 2018 and 2019 G7 summit, saw the composition of grouping as G6+1 due to Trump’s sole disagreement in an array of issues. Trump is targeting China as an easy mark to gather public support in the US presidential elections, which is scheduled to be held in November this year.

Apart from Trump’s invitation, the collective consensus for including new members will take more time. In the geopolitical environment, the expanding G7 will help India, and at the same time, it is beneficial for the grouping too. Given the US presidential elections in mind, India should wait and watch the developments of G7. India should focus not to contain, but balance China in the expanded multilateral forum to address the asymmetry in regional power politics.

Kannan R. Nair
Author is working as an advocate for the Global Schools Programme, He also worked as a research intern at the National Institute of Advanced Studies, Bengaluru. Currently, pursuing his postgraduate degree in Political Science from the Department of Politics and International Studies, Central University of Pondicherry.
Tags:
G20 United States United Nations Trump India G7 Modi UK
Share:
Share this...