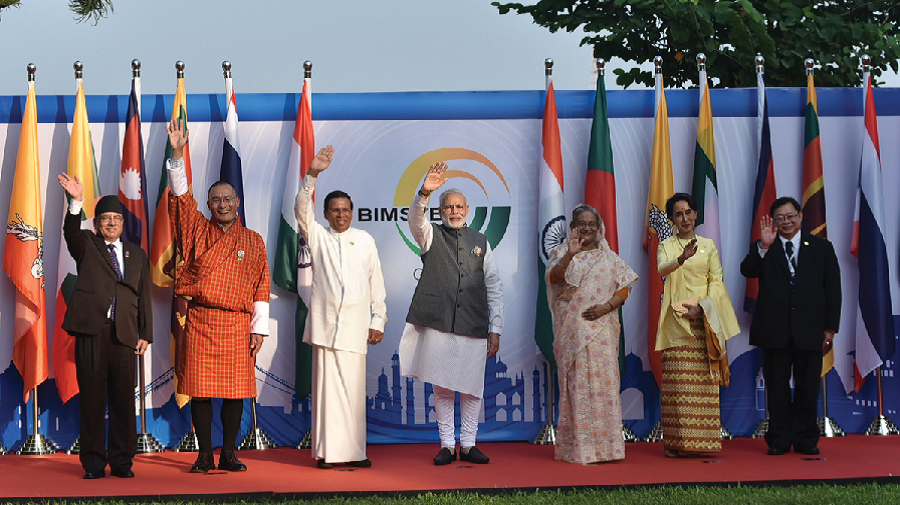 The Bay of Bengal is a strategic location overflowing with infinite potential that is waiting to be utilised. The Bay of Bengal Initiative for Multi-Sectoral Technical and Economic Cooperation (BIMSTEC) comprising of the seven member states of South and South East Asia is a distinctive sub-regional initiative in terms of both its political geography and proximity to the Bay. Among the member countries, five members namely, India, Bangladesh, Sri Lanka, and two landlocked countries of Nepal and Bhutan are also members of the South Asian Association for Regional Cooperation (SAARC). Two of its member countries, namely Myanmar and Thailand are part of the Association of Southeast Asian Nations (ASEAN). The sub-region is presently home to around 1.6 billion people and brings together US$ 2.88 trillion economy, which accounts for 4 percent of the global GDP. It has a high potential for strengthening the regional economy as well as social and physical connectivity. Accordingly, it is a fitting strategy for fortifying India’s imprints under the ‘Act East’ Policy and Neighbourhood First initiative.

Being quiescent for more than two decades since its formation it is only in recent years that the sub-region awoke towards the requirement of enhancing their regional commitment. Part of this realization has been due to the brimming prominence of the maritime space. Additionally, the sub-region started gaining thrust post the stagnation of SAARC which ambushed much of India’s economic stakes in the region. Also, the mounting foothold of China with its Belt and Road Initiative makes it pertinent for India to reinforce its own strategic prominence within the region. Thus, how is India contributing towards revitalising the sub-region?

At the helm of affairs

A number of initiatives have been spearheaded by India since the Goa Retreat of 2016 where the BIMSTEC members interacted with BRICS members garnering the former its first high profile exposure. Following this, 2017 celebrated as the 20th anniversary of the sub regional forum; saw a lot of mechanisms at a place to promote BIMSTEC within India. Being the Lead nation in four sectors, namely Counter-Terrorism and Transnational Crime, Transport & Communication, Tourism, and Environment and Disaster Management, each sector witnessed more focus and development in the last three years. One sector worth mentioning is the Counter Terrorism and Transnational Crime.

In this particular sector, the sub-groups are operating towards intensifying collaboration against terrorism. BIMSTEC National Security Chiefs (NSCs) have been formed under which three meetings have already taken place between 2017 till 2019. Historical linkages coupled with porous and open borders within and around the sub region, mostly rampant with poverty and social marginalization have increased activities of major insurgency and also terrorist groups. It thus becomes imperative that effective counter forces, data sharing, law enforcement in this regard is crucial to safeguard the nations. However, for the effective functioning of this mechanism, the members have to ratify the process which is currently under progression. Once ratified, it will be essential to draw concrete measures to enhance cooperation and coordination among their law enforcement, intelligence and security organisations. It will also boost capacity building and operationalise information sharing in real-time.

Another important aspect that has been given its due importance is combating drug trafficking within the region. BIMSTEC sub-region has a high propensity towards the trafficking of drugs via rail, road, air and sea. Unfortunately, the Golden Triangle falls within the sub-region where the manufacturing and distribution of Methamphetamine remain quite high and is in turn further trafficked to all the BIMSTEC countries. Poverty, limited education and social marginalization remain major factors escalating the risk of drug use disorders and vulnerable and marginalized groups also face barriers to getting treatment services due to discrimination and stigma. For the first time, a conference within the sub region took place at the beginning of 2020 which shared the best practices among the sub-region to counter this issue. More such meetings and workshops will be essential to counter the said issue.

Areas of challenges and way forward

In terms of increasing connectivity, while New Delhi has drafted the Coastal Shipping Agreement and the BIMSTEC Motor Vehicle Agreement as well as the SoPs, it is yet to be formalised. Earlier major projects like the Kaladan Multimodal project and Asian Trilateral Highway are still underway. It needs to be understood that for seamless as well as multimodal connectivity to succeed there is a major need for better coordination and cooperation amongst the different nations within the sub region. Funds and political will in this regard will be essential.

It must be mentioned that the signing of the Memorandum of Understanding (MoU) on-grid connectivity has led to the scope of enhancing energy cooperation among the member states. Following this in February 2020, BIMSTEC announced its plan to connect about 3,000 kilometre-long power grids from Myanmar-Thailand to India. Plans for creating trilateral power trade are also underway between Bangladesh, Nepal and Bhutan.

While India is taking steps to boost the tourism sector however more needs to be done.  The prevalence of Buddhist culture and tourist attractions in India, Sri Lanka, Myanmar, Nepal, Bhutan, Thailand and even Bangladesh provide the opportunity for the creation of a regional Buddhist circuit, which would appeal not only to domestic but also to foreign tourists. The easing of visa regulations for tourism may contribute substantially towards regional integration.

Additionally, the Bay of Bengal region is one of the most disaster-prone regions and frequently experiences several kinds of natural disasters like cyclones and tsunamis. Such events cause major disruption of trade and livelihood across the Bay. As global warming coupled with climate change accelerates, it will lead to a rise in sea levels and thus natural calamities are likely to increase in the future. Therefore, to create disaster preparedness in the region, it is necessary that BIMSTEC invokes local actors to undertake preparatory measures. Also, it will be essential to introduce initiatives for the exchange of best practices within the region to counter the same.

While much can be noted about the success India is experiencing by taking a central role in driving BIMSTEC forward. However, much work needs to be done in order to strengthen the sub-region for its effectiveness. Thus, the impediments stated above will need to be looked into and worked upon. Faster completion of the long-drawn multimodal projects will definitely help in revitalizing the region further.

India is currently the largest contributor to the BIMSTEC secretariat budget. However, more funds need to be allocated for the smooth functioning of the sector. To overcome this issue the Fourth BIMSTEC Summit, directed its member states to explore the possibility of establishing a BIMSTEC Developmental Fund (BDF) with voluntary contributions from member states for planning and financing of BIMSTEC projects. This process needs to be implemented more rapidly and efficiently for the growth of the sector.

The current COVID crisis has questioned India’s swing from BIMSTEC back to SAARC. However, rather than construing India’s move as an act of its shifting foreign policy, it may be understood to be a diplomatic move to reinstate the latent relations. The act does not necessarily dispute India’s commitment to BIMSTEC as has been shown in the increased number of activities within the sub-region. India can thus play a crucial role in increasing the visibility of the sub-region. It is therefore important to wait and watch how the future relations of the sub region pans out during and post the pandemic.