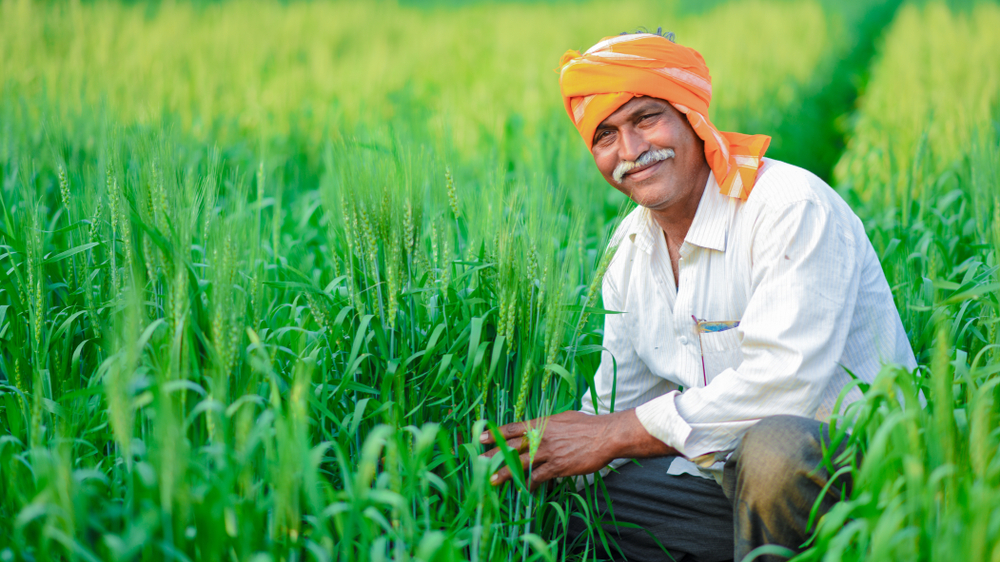 10,000 years ago. Since then the sector has been feeding the world population and therefore is a lifeline for the entire planet. Despite the ever-increasing demand for food, the agriculture sector globally has remained subdued in the past few centuries with industry and services assuming greater significance. The share of agriculture and allied sectors in global GDP dwindled from 7.6% in 1995 to 4% in 2018. A similar trend is evident in India. While the total foodgrain production has risen from 51 MT in 1950-51 to about 281.7 MT in 2018-19, the share of agriculture in our total GDP dropped from more than 50% in 1950-51 to 17.1% in 2018-19. In the last 15 years though the share of agriculture in total GDP has remained fairly steady between 17% and 20%.

Globally, India stands at the second position in terms of total wheat and rice production. Although the rate of growth in agriculture GDP has remained modest and chequered since independence, the fact remains that the sector has expanded manifold post-independence. The agriculture GDP (at 2004-05 prices) increased from Rs 168,361 crores in 1954-55 to Rs 800,548 crores in 2014-15. As against this, the total workforce dependant on agriculture (cultivators and agricultural labourers) declined from 69.7% of the total workforce in 1951 to 54.6% in 2011, thus employing more than half of our working population even today.

After the initial thrust of the Green Revolution in 1960s, Indian agriculture was becoming docile with the national focus shifting to industry and service sectors. However, the inherent significance of agriculture persists on account of the need to attain and maintain food security, the dependence of large section of the population on the sector, risks posed by climate change, challenges and opportunities from global integration of markets, increasing burden of subsidies, changing food habits, focus on wellness and expanding market for herbal products.

Traditionally, agriculture has remained an individual livelihood activity with high risks and poor as well as erratic returns. Being largely in the unorganized sector, agriculture has not been able to take the shape of an enterprise. In the last couple of decades, however, efforts have been made to convert the sector into a viable business, even for smallholders. Along with several policy-level changes, steady public and private investments have flown into the sector to strengthen the infrastructure, input quality, financing, risk management, supply chain and market linkages. The Gross Capital Formation (GCF) in agriculture through the public sector (at current prices) went up from Rs 4,874 crores in 1993-94 to Rs 92.606 crores in 2018-19, an increase of more than 11 times. Similarly, private investments in the sector increased by almost 25 times in the same period from Rs 13,834 crores to Rs 334,526 crores. In fact, the public sector investment has more than doubled between 2011-12 and 2018-19.

In addition to capital investments, huge support is being provided to the sector in the form of input and other subsidies. Input subsidies by Central Government on fertilizers, crop insurance premiums, interest subvention on crop loans and direct cash transfers to farmers amounted to Rs 95,279 crores in 2018-19 and are expected to almost double to Rs 183,179 crores by 2020-21. In addition, state governments also provide subsidies towards power, irrigation, crop insurance premium and loan waivers. Over and above the input subsidies, Rs 163,142 crores spent on social safety nets (2018-19) in the form of MGNREGS and food subsidy also benefit farmers indirectly.

The initial years of independence were dedicated to increasing output in agriculture in order to attain national food security objectives. The Green Revolution and the subsequent interventions ensured that the national agricultural output grew significantly over the decades. However, despite increasing output, the economic condition of farmers continues to remain poor on account of several factors like lower productivity, over-reliance on traditional crops, market distortions, vagaries of weather, etc. As a result, the policy focus in recent years has shifted from increasing production to increasing profitability. The government in 2017, adopted an ambitious target of doubling farmers’ income (DFI) by the year 2022. An expert panel formed in 2016 to suggest steps to attain DFI, recommends a series of institutional, policy and regulatory initiatives ranging from an overhaul of Ministry to Agriculture to changing the definition of ‘farmer’ to include cultivators, lessee farmers as well as sharecroppers. Some specific government initiatives are highlighted below.

Agriculture in India is at a critical inflection point. The stimulus it has received over the years through investments and policy interventions has brought it out of the bare subsistence level it was in a few decades back. Renewed interest has been observed among the farmers, who will now be called agripreneurs, institutions, technology start-ups and other stakeholders. News of people leaving their highly paid jobs to take-up agriculture is becoming more frequent. The COVID-19 crisis in a way has helped the sector by halting the exodus of labour from rural areas. The monsoon situation also has by and large been good across the country in the past few years.

Amidst all these positive factors, a holistic approach towards de-risking the sector and making it sustainable needs to be furthered. Fragmentation at the policy as well as implementation levels needs to be addressed. The ceiling on agricultural landholdings, restriction on transfer of agricultural land to non-agriculturists and other barriers to free entry and exit into the sector need to be relaxed. Incentivizing better risk management practices at the farm level, encouraging adoption of high-value crops, diversification of farm incomes through avenues like solar power generation at farms, more investment in satellite / remote-sensing technology for precise and localized weather advisories as well as yield assessment and continuous capacity building of farmer collectives like FPOs and cooperatives can go a long way in achieving the goal of converting agriculture into a vibrant business activity.

Arman Oza
Author is an international consultant working in areas of risk management and insurance with a focus on agriculture.
Tags:
India Modi AgriculturalCooperation COVID-19 Indian Agriculture
Share:
Share this...