India-Africa Relations: 1947 to the Present 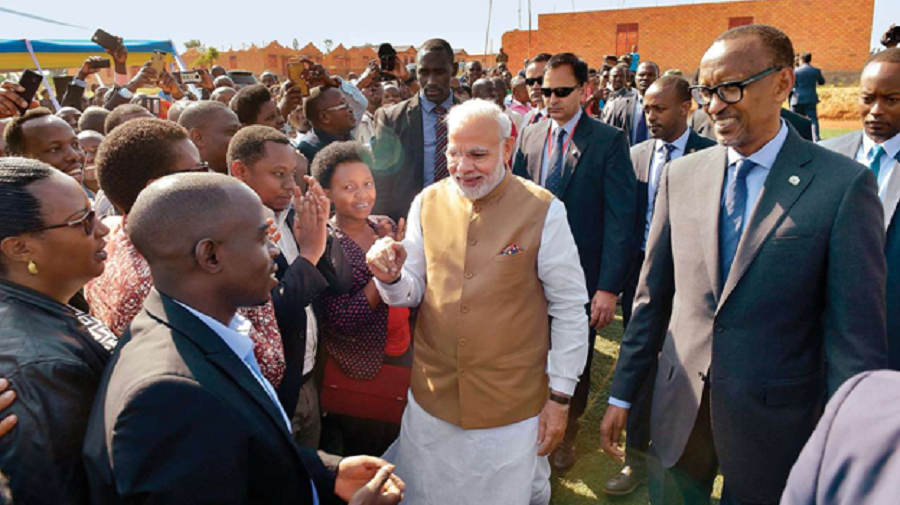 The relations between India and Africa have long historical roots. For many centuries, the peoples of the two parts of the world have interacted at the levels of economics, politics, and socio-cultural practices. Economically, there have been trade transactions in both natural and human resources. Some of the natural resources include cotton, spices, and other foodstuffs. The human resources became items of trade especially when African slaves crossed the Indian Ocean to parts of Asia, including India. Politically, India, just like many African countries, was once a former British colony, for over two centuries. India’s fight for independence, led by the likes of Mahatma Gandhi and Jawaharlal Nehru, among others, leading to India’s independence, inspired many African nationalists. The then newly independent Indian government also helped African nationalist movements to achieve their goals. On the socio-cultural scene, there has been exchange of ideas, education opportunities, religious beliefs, and medical drugs and equipment over the years. This article retraces and highlights these relations and suggests a way forward for all parties involved, during the 21st century and beyond.

India and Africa Relations at Independence

When India attained her independence in August 1947, Prime Minister Jawaharlal Nehru made it his government’s priority to create friendly, cooperative, and mutually constructive relationships between his government and those of the African countries upon their gaining of independence. To achieve that, he encouraged and fully supported African nationalist movements and political parties. India was one of the key organizers of the Asian-African Conference, held in Bandung, Indonesia, in 1955. At that conference, India and the other Non-Aligned Movement (NAM) members committed themselves to do the following things: firstly, to promote trade and economic development and cooperation in the Asia-African region. Secondly, to enhance the development of cultural cooperation between the Asian and African countries, some of which had been hampered by centuries of European colonial rule. Lastly, to promote the extension of human rights and self-determination for the African countries. They argued that the denial of independence to Africans was racially influenced and denied the Africans their dignity. As the African countries gained independence, from 1956 onward, the Indian government did not hesitate to establish formal diplomatic relations and offices there. The African countries also reciprocated.

Since then, the relations have had their difficulties, but to a significant extent have remained strong and cordial. In economic terms, the trade between India and African countries continued to flourish. Apart from the individual Indian traders, who began operating in Africa during the colonial period, in the post-colonial era, Indian companies opened and operated successful businesses in Africa. These have operated in areas of chemical fertilizer production, production of medicine, the transport sector, and information technology. Indian exports to Africa included textiles, foodstuffs, tea, spices, sugar, footwear, blankets, sewing machines, paper, plastics, drugs, and bicycles, among others. When African countries faced economic hardships from the late 1970s onwards, India was at the forefront to help find long-lasting solutions. This included convening the Non-Aligned Summit in 1979, in Havana, Cuba. The Caracas Program of Action followed this in May 1981. The aim of these initiatives was to encourage South-South cooperation. The Indian government worked with African governments to mitigate the economic downturn, and to revive the most significant sectors in their respective economies. The main areas of interaction were in agriculture, technical assistance, and trade.

On the political scene, India continued to side with the extension of human rights and democratic governments in Africa. It was for that reason that for instance, India severed diplomatic ties with South Africa once the Apartheid system was launched by the National Party in that country. India also extended economic sanctions against the South African government, until the 1990s. India also opposed the minority regimes of Portuguese Africa (especially in Angola and Mozambique) and South Rhodesia, following the enactment of the Unilateral Declaration of Independence (UDI) in 1965. When the Congo crisis broke out between 1960 and 1965, India also sent thousands of its troops to help return the country to conditions of peace and stability. Over the years, India has also provided guidance to African electoral bodies on conducting elections in democratic systems.

In socio-cultural terms, the relations have also been impressive. There have been bilateral high-level exchange visits between Indian leaders and those of African countries, including at the top level of the prime minister and state president. For instance, the Indian Prime Minister, Jawaharlal Nehru was one of the first world leaders to visit the then newly independent Sudan in July 1957. On the part of the Sudanese government, Prime Minister and later President of Sudan, Ismail El Azhari, also paid state visits to India in 1955 and 1967. In the decades after independence, the Indian government offered scholarships to thousands of African students to study in Indian universities. Many went to the University of New Delhi and Bombay University. The funds for such scholarships were generated from the India Technical and Economic Cooperation (ITEC) program established in 1963/’64. This helped to reduce the illiteracy levels in Africa.

The Way Forward: Cementing and Building on a Successful Platform

In the late 20th century and early 21st century, especially in the aftermath of the Cold War, India has utilized these long-term relations to take advantage of Africa’s economic and geopolitical. Similarly, African governments have found a reliable ally in the Indian government, through its continued support in economic, political, and socio-cultural arenas. One needs not to go further than appreciate the three India-Africa Forum Summits (IAFS) held since 2008 to display these cordial relations. Similarly, India now has embassies, high commissions, and consulates across the African continent’s 54 countries. The current Prime Minister, Narendra Modi, champions the Indian government’s foreign policy toward Africa called “multi-alignment foreign policy.” It emphasizes the Indian government’s role to engage with regional multilateral institutions and the use of strategic partnerships. It has allowed India to boost its economic development and national security, while at the same time also allowing India to maintain economic and political ties with African states. This has been essential for the infrastructural and economic development of most African countries, through both Indian government loans and grants given out through the Special Commonwealth Africa Assistance Program (SCAAP). Current statistics indicate that India is now Africa’s third-largest trading partner, accounting for over seven percent of Africa’s trade output, calculated at over $70 billion. Africa has been the source of India’s demands for oil, gold, ores, and gas, among other items. Various multi-national companies of Indian or African origin operate in Africa and India.  As technological changes have ensued, many of these now operate in areas of IT, farm machinery, and transportation. The list is endless and includes such companies as SAB Miller, Old Mutual, Sasol, Tata Motors, Mahindra, Bharti Airtel, and United Breweries, among others. These have helped to create employment opportunities.

In security matters, India has also assisted African countries to fight against terrorism through the provision of arms and training of military personnel. India also participates in UN-led peacekeeping missions across Africa. As the COVID-19 pandemic has continued to affect the globe, the relatively developed India has also used its economic muscle, medical equipment, and medicine, to assist African countries. The availability of Indian-manufactured drugs has also been essential in the fight against the HIV and AIDS pandemic in Africa. These relations must surely continue, as they remain beneficial to the peoples of both India and Africa, not just at the elite level.