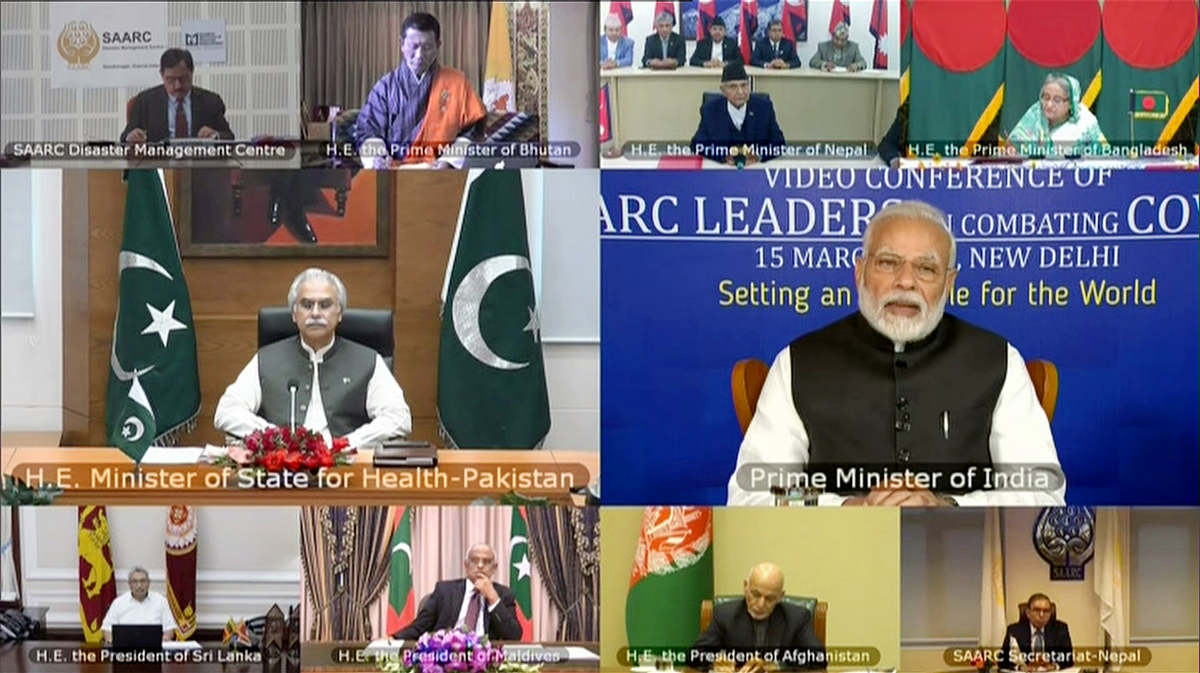 At 73, one is thought to be old and wise, have difficulty in changing, but a nation like India at 73 can be thought of as a young enough, vibrant nation, historically still in a neo infancy stage.

At one time, India had thought it had evolved with concepts like the mixed economy, non-alignment, Gandhian non-violence as its conceptualized pillars. But those were ideals for a new nation caught in the vortex of cold war politics. Economy and national security being the accepted two pillars of any foreign policy, India too used these for her touchstones.

It now seems to have come a full circle from Nehruvian socialist policy of self-reliance to Prime Minister Modi’s ‘atmanirbhar’. The impact of COVID 19 has made most nations inward-looking, debunking earlier concepts of globalisation and connectivity.

At this time, China has turned out to be one of the major challenges while discussing South Asia. After the recent events in Galwan, Ladakh, and India’s boycott of Chinese goods, relations have become tense and need to be managed by both as responsible powers. Unfortunately, China’s aggressiveness has impacted the South China Seas, Hong Kong and Taiwan as well as directly or indirectly, on India too.

Further, it is adept at playing ducks and drakes and has done more damage backing Nepal and encouraging it with its cartographic war with India. India – Nepal had a mostly benign relationship. At times, what was termed as money order relations, since so many Nepalese origins were working in India as domestic help, security, executives in malls and restaurants; were married to Indians and were sending money home. Indian Army, too, comprise of regiments of Gurkha troops also from Nepal who fought in World Wars I and II at the Falklands, and in South East Asia. A tightly knit identity between India and Nepal emerged, with of course a few glitches. Rumour has it that the Chinese ambassador to Nepal recently encouraged this change of border with India. Citizenship papers are being asked for on both sides of the border, an unheard-of phenomenon except in dire circumstances of criminal activity. India-Nepal Treaty of Peace and Friendship, 1950 actually emphasize the good relations between India and Nepal. It covered 10 articles including the free movement of people and goods as well as the issuance of work permits. It was a comprehensive document of goodwill in South Asian regions which somehow Nepal now is protesting against and needs to be negotiated with.

Likewise, the other neighbour Pakistan too is being backed by China. This is, of course, not a new phenomenon. Pakistan always had China as its loyal partner: playing the underdog to India it even had the friendship and ally status with the USA, much more so after having given air space and refueling facilities after 9/11 till it showed its nurturing of terrorist cells by giving shelter to the dreaded Osama Bin Laden. Only then did its status with the US change. It is now definitely an exemplification of changing dynamic relations with low economic development and failed nation status, in fact, making it an even more vicious neighbour competing with identity issues inclusive of security and terrorism with India.

In South Asia where India really needs to stretch out and implement both soft and hard power which it actually can and should exercise, Pakistan which should have become an ally nation, an improbable thought has now become a difficult neighbour. Amongst other issues, it is allegedly largely due to the imposition of article 370 in Jammu and Kashmir. Earlier India not the best of trade partners in its own eyes, did not feature among Pakistan’s top 10 exporters but was in Pakistan’s list of top 10 countries from where it imported. More than a decade of hostile relations, in a recent phase it fractured its trade relations too. Vice versa India had more trade relations with US, Canada, Brazil, Australia, European nations than with Pakistan, understandably so. This needs to change as middle-level businessmen on both sides will gain. Neighbourly relations may improve since culturally – poetry, music, art, theatre are readily shared and enjoyed.  However, Pakistan made a concession in allowing Afghanistan to send goods using the Wagah border in Attari (14 trucks with over INR 5 crore goods) from 15 July 2020. Maybe this could be a takeoff point; trade could be used to better relations between India and Pakistan while also dealing with military problems and strategic issues.

India has been de-hyphenated in its relationship with Pakistan only very recently.

India will have to face challenges apart from a looming China, wavering US and almost permanent enemy Pakistan. It has to engage competently and comfortably with its other neighbours. India is the only nation with its borders with seven countries. Its relations with Bangladesh, of late, has been good and fulfilling. Bangladesh has developed into a textile hub, kept its COVID 19 cases manageable even having a taskforce with India to fight the pandemic.

India-Bangladesh’s trade has increased. Containerships from Chittagong make that seaway easier increasing bilateral connectivity and business services. “Time tested and historic” is what these relations are termed as.  Bangladesh for example has kept away from India’s policy on Kashmir saying it is an internal matter. India will continue to aid and trade with Bangladesh, a strategic and friendly move.

Bhutan has been a self-sufficient nation, a paradise kingdom on a path to democracy and has a leveled relationship with India. Isolating itself, yet friendly. The hydropower sector is the flagship area of India-Bhutan bilateral cooperation. Bhutan produces so much energy from hydropower that about 80% of its surplus power is exported to India and they formed their first-ever joint venture to develop a 600-megawatt hydropower project in Eastern Bhutan over the Kholongchhu river, to be completed in 2025.

Sri Lanka’s relationship with India is both competitive and conflictual depending on issues. The Tamil issue is close to the Indian Tamilian heart and crops up now and again. Sri Lanka is still trying to recover from the Easter bombings. On 21st April 2019, horrible shocking bombings took place in churches and high-end hotels. About 290 people were killed and hundreds injured.

The problem of the Muslims in Sri Lanka got exacerbated by these bombings and Sri Lanka had to negotiate its Christian and Muslim populace. Sri Lankan figures of COVID19 were 2839 confirmed cases, 11 deaths and 291 active cases. Despite this, the elections took place.

On the political front, whatever the outcome of the elections the Tamil community feels it will never get the justice, rights, and accountability it has demanded. The government has not taken into consideration their demands, but the divisions are on all sides exacerbated by the pandemic which has muted all campaigns. The results of the elections showed Prime Minister Mahinda Rajapaksa’s Party (SLPP) 145 seats and now needs another 5 seats therefore an alliance to carry out major constitutional changes amending the present constitution. This does not bode well for the minority population. India will have to do more to manage this situation.

As a neighbour Maldives has been an avuncular nation till fundamental forces took over. It lost its popular tourist destination place for a while. It is slowly regaining that status. India was one of the first nations to recognise Maldives independence. The two have developed close military, strategic, economic and cultural relations. The Maldives currently has 300 COVID 19 cases. Since tourism makes up about 28% of the GDP this has affected the Maldives badly and other sectors. INS Kesari has supplied 580 tonnes of essential food items as well as medical supplies. India has also tried to help with fish processing plants. India’s friendly engagement with the Maldives is on the anvil.

The challenges to India are foremost, solving the Chinese puzzle, the wooing of the United States and friendly relations with neighbours. But there are more issues demanding attention on India’s table. Some of them are to increase its economy, connectivity, travel, trade and investment. It will have to change the format radically, become more self-sufficient and inward-looking, reverting to the self-sufficiency model propounded by Gandhi and EF Schumacher’s “small is beautiful”.

Another priority would be militarization, an expensive import has been Indian Air Force upgraded with Raffaele jet fighters from France. Will this be done at the cost of development?  The argument is a fleet is needed to make a difference, to be substantial. There has been no talk about what place nuclear weapons and nuclearization has. This is of course because of the current pandemic. This needs to be calibrated.

Terrorism quotient is not going anywhere. It might be lurking between several layers, but it is not a dying phenomenon. India has agreements with the Interpol, the European Union, and South East Asia to mitigate this. Yet recent militancy and on-going terrorist activity in Kashmir points to the fact that terrorism has to be dealt with by the Indian state with not just the military but with sustainable policy.

In conclusion, one has to say that though SAARC failed as a regional organisation, some alternative must be facilitated to address common issues of South Asia. India has the power and status to make South Asian nations unite. India at 73, needs to project its leadership with democracy, political rights, justice as its goalposts. Engagement with both soft and hard power will definitely add to its status as a South Asian power.